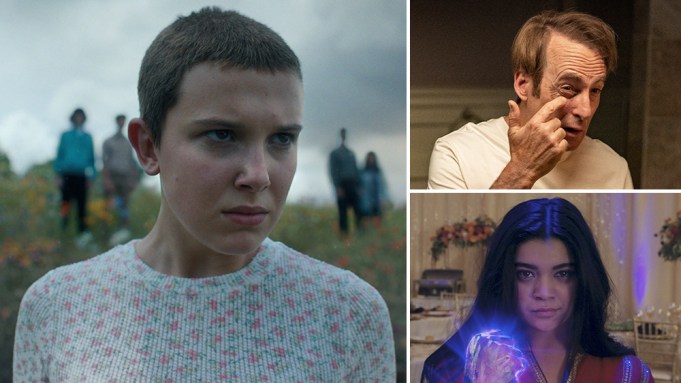 Courtesy of Netflix / AMC / Disney Plus

Once again, “Stranger Things” took over Variety’s Trending TV chart for the week of July 4 to 10, earning another 672,500 engagements following the two-part Season 4 finale drop on July 1. Although the series was down 48% week-over-week, this marks the sixth week the show has earned the No. 1 spot. It has now surpassed another Netflix entry, “Heartstopper,” which trended in the top spot for five straight weeks earlier this year.

Unlike “Heartstopper,” the “Stranger Things” run is not consecutive. The series fell to second place from June 13 to 19, when “Game of Thrones” took over the top spot following the announcement of a Jon Snow spinoff. The show reclaimed the No. 1 position the following week, where it has remained ever since.

The sci-fi smash continues to be a hit with viewers in part because of the introduction of new fan-favorite characters and key music choices, which have also led to increased popularity for performers like Kate Bush and Metallica. This past week, the show also became Netflix's second series to ever cross a billion hours viewed, joining Korean drama “Squid Game.”

Currently losing my mind over @Metallica duetting with Eddie Munson on Master of Puppets! pic.twitter.com/CKyhaLVRiB

“Ms. Marvel” was also down in overall engagements this week, dropping roughly 83% from last week. But the MCU series climbed the chart one spot to second place with more than 76,000 engagements. Fans continued discovering the show during its penultimate, Pakistan-set episode, as the series now prepares for its first-season finale this week.

Starting @msmarvel. I’m two minutes in and I’m already in love with the joyous, effervescent #ImanVellani! She is a star! ❤️ #MsMarvel @disneyplus

Right behind Disney Plus’ superhero entry was “Better Call Saul,” which kicks off its final six episodes on Monday. The final teaser trailer dropped on July 7 to generate excitement, drawing more than 68,000 engagements on Twitter. Plot details (along with episode titles) remain top-secret, although fans are looking forward to the promised return of Bryan Cranston and Aaron Paul as their “Breaking Bad” characters Walter White and Jesse Pinkman, respectively.

Bravo’s “The Real Housewives of Beverly Hills,” which entered the chart last week in seventh place, rose to fourth place this week with more than 51,000 engagements. Much of that chatter was a result of two key episodic moments from Wednesday’s “Calamity Jayne”: Erika Jayne speaking inappropriately to Garcelle Beauvais’ 14-year-old son and Kyle Richards accusing Sutton Stracke of lying about suffering from two miscarriages. Both plot points resonated with fans who went online to share their heated opinions.

We got a woman accusing another woman of faking a miscarriage, 4 adults laughing at a child being violated, a grown ass woman addressing somebodies wife as their “ baby mama” WHAT IS GOING ON.. #RHOBH pic.twitter.com/PUo81J37Sn

Netflix, meanwhile, took over the fifth, sixth and seventh spots on this week’s chart. South Korean drama “Extraordinary Attorney Woo” earned just over 35,000 engagements with the release of two new episodes, while chart regular “Heartstopper” continued to pulse with an extra 32,000 engagements.

“Cheer,” which debuted its second season in mid-January, returned to the chart with just over 32,000 engagements following the news that former star Jerry Harris has been sentenced to 12 years in federal prison for soliciting sex from minors.

Harris was first arrested in September 2020, which shocked many fans of the Navarro College series since Harris was a fan favorite and had earned a small level of fame with viewers and celebrities alike. Some were appalled at the number of people writing character statements for Harris, helping to fuel overall engagement.

For nearly two years my boys suffered consequences for telling the truth about Jerry Harris. The very least the adult influencers who chose to vouch for him can do is face the music and stop deleting comments and blocking those who criticize them.

Netflix’s “Vinland Saga” (which is also available on Amazon Prime Video) launched on Thursday and made it onto this week’s Top 10 with just under 30,000 engagements. The 24-episode animated series was first released in 2019 and follows young Thorfinn, who joins a mercenary band to secretly exact revenge after his father’s murder.

The streaming service also conjured up the ninth spot this week following a new episode release of South Korean drama “Alchemy of Souls.” The fantasy series centers around a powerful sorceress in a blind woman’s body, who agrees to help a man from a prestigious family change his identity. The show drew nearly 28,000 engagements this week.

The romance was just ahead of this week’s 10th-place entry, “Outlander,” which pulled in 26,600 total engagements for Starz.

VIP+ Analysis: Can ‘Stranger Things’ Reel in Subs for Its Streamer?