Plus fans react following ‘Batwoman’ and ‘Legends of Tomorrow’ cancellations 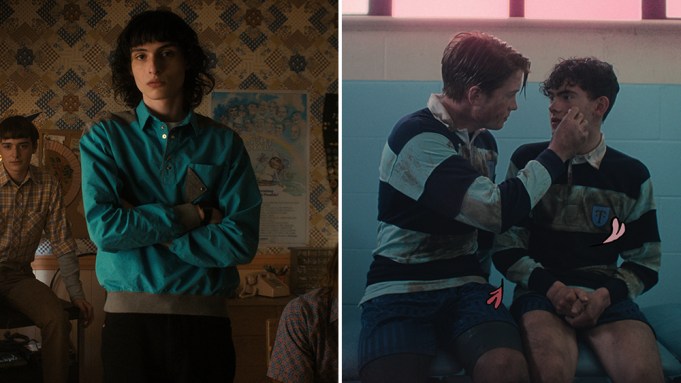 Netflix’s “Heartstopper” continued to top Variety’s Trending TV chart for the week of April 25 to May 1. The series, which debuted at No. 1 last week following its April 22 drop, drew even more interactions this week, with 1.05 million engagements on Twitter.

heartstopper debuted on netflix top 10 as the seventh most watched tv show on the platform last week, with over 14,5 millions hours watched!!! pic.twitter.com/XCugXglLf8

The eight-episode first season follows high schooler Charlie Spring (Joe Locke), a teen who falls in love with his classmate Nick Nelson (Kit Connor). The story is based on Alice Oseman's LGTBQ-themed Webtoon comic and graphic novel of the same name. Fans are already clamoring for a second season, while others are discovering the series or re-watching it to pick up on previously missed details.

Haha, I'm on my fourth #Heartstopper rewatch and noticed for the first time that the Truham school crest on Nick's uniform changes from spades to hearts when Charlie imagines him declaring his love for him right at the beginning. 😁 Nice touch @AliceOseman and @Netflix! ♠️♥️ pic.twitter.com/qzRVcyVx6p

“Heartstopper” wasn’t the only show Netflix had to celebrate this week. Sci-fi hit “Stranger Things” continued to build anticipation with fans ahead of its May 27 return, jumping three spots into the No. 2 slot with nearly 300,000 engagements. Part of that engagement was correlated to a report that Netflix allegedly spent $30 million per episode for the new season -- a staggering amount considering the streamer’s recent financial woes.

IT’S ALMOST TIME. 🕰️ Stranger Things 4 is coming to @netflix on May 27. pic.twitter.com/v5kRN28QV9

netflix drop $30 million per stranger things episode?? a demigorgon better pop out the screen and beat my ass 😭 https://t.co/gKptV8ybuH

When the series returns for the first part of its penultimate season at the end of the month, the story will pick up six months from 2019’s third-season finale. Robert Englund (“A Nightmare on Elm Street”), Sherman Augustus (“Into the Badlands”) and Mason Dye (“Bosch”) are among the new cast members in Season 4.

Back in third place on this week’s chart was the penultimate episode of “Moon Knight” on Disney+ with 245,000 engagements. With one episode to go in the six-part series, fans took to Twitter to dissect the latest twists and to speculate about the limited series’ ending.

I JUST WATCHED MOON KNIGHT EPISODE 5 AND OH MY GOD THAT WAS INCREDIBLE. THAT WAS ONE OF THE BEST EPISODE OF ANY MARVEL DISNEY PLUS SHOW EVER pic.twitter.com/A24lmg75It

At Starz, the season finale of “Outlander” earned more than 122,000 engagements -- coming in fourth -- as fans lamented the shortened season and reacted to the “breathless” finale, “I Am Not Alone.”

And, that’s a wrap on S6 😩😩Thank you to our cast, crew, writers, producers, @Writer_DG & everyone else who contributes to this show. It’s a joy to be a part of such a special production. Thank you to our partners, @STARZ & @SPTV. And to our amazing fans - Thank you! ❤️❤️

“Outlander” was previously renewed for a seventh season, which will be based on the seventh book in Diana Gabaldon’s series, “An Echo in the Bone.” Because of COVID, the sixth season was cut down to eight episodes, but the upcoming installment doubles the episode count to 16. That marks the longest episode-run of the series since Season 1, which was also 16 episodes when it debuted in 2014.

Netflix returned to represent the fifth slot in this week’s chart with the buzzy “That ‘90s Show,” which is expected to debut later this year. During this past weekend’s comedy festival, “Netflix Is a Joke: The Festival,” the streamer confirmed the return of “That ‘70s Show” actors Topher Grace, Mila Kunis, Ashton Kutcher, Laura Prepon and Wilmer Valderrama in guest-starring roles, which helped the upcoming comedy engage more than 88,000 Twitter users.

Elsewhere on the chart, The CW made waves with “Batwoman” and “Legends of Tomorrow” in sixth and seventh place. The unexpected cancellations of both series this past week upset plenty of fans, who took to Twitter to mourn and commiserate.

Just got the sad news that #Batwoman will not be seeing an S4. I am bummed, but full of gratitude. What an honor to make 51 episodes. So many inspiring, brilliant people contributed to this series. Thank you producers, cast and crew. Thank you, fans! We love you. ❤️

Well, folks. It’s been an incredible run. However, the CW has let us know that there will be no season 8 of #LegendsOfTomorrow. We are heartbroken, but also immensely grateful for the amazing work our cast, crew, and writers have contributed to the little show that could.

With the series axed, the only remaining DC shows on The CW are “The Flash,” “Superman & Lois” and “Stargirl,” which debuts its third season later this year. Meanwhile, the network has also ordered a “Gotham Knights” pilot from Chad Fiveash, James Patrick Stoteraux and Natalie Abrams.

Over at HBO Max, “Our Flag Means Death” once again graced the Top 10 chart at No. 7, with more than 53,000 engagements, as more fans discovered the series and others called on the streaming service to bring the show back for a second season. The comedy debuted in March and tells the story of aristocrat-turned-pirate-ship-captain Stede Bonnet (Rhys Darby). The series is loosely based on the real-life figure of the same name.

Rounding out this week’s chart is “Better Call Saul” at AMC with 47,000 engagements following a new episode on April 25, and “The Kardashians” in 10th with 43,000 engagements as its inaugural season continues unfolding Thursday nights on Hulu.

We premiered two weeks ago and I’m blown away that we had the highest premiere in HULU History! Beyond grateful when we heard that news!! pic.twitter.com/FT5CVFojNl