‘Euphoria’ Dominates Twitter Conversation for Third Week in a Row

Plus 'Housewives,' 'Ozark' and 'After Life' crack this week's Top 10 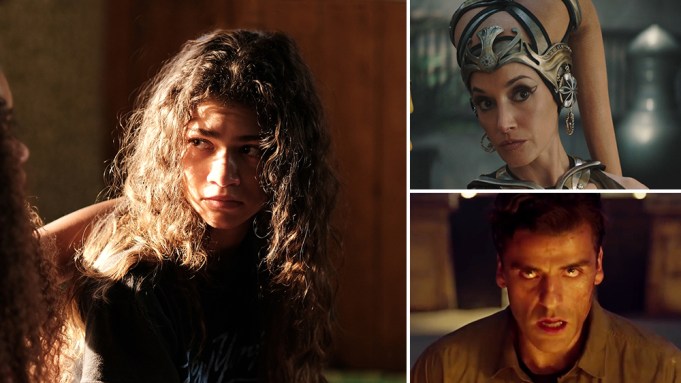 “Euphoria” continues to reign over Variety’s Trending TV chart, hitting the top spot for the week of Jan. 17 – 23. This marks the third week in a row the HBO series has landed there with just as many episodes, as fans continue to dissect all of the onscreen drama in the show’s second season.

Despite the show’s three-peat status, the crux of this week’s trending list were heroes, from Marvel, to DC, to "Star Wars," to Tolkien. Taking this week’s second spot was “Moon Knight” thanks to a new, surprise trailer from Disney Plus on Jan. 17. The-two minute preview showing Oscar Isaac in the title role and Ethan Hawke as Dr. Arthur Harrow caused instantaneous buzz, a conversation that was further bolstered by the March 30 debut date reveal.

Fans were equally invested in a follow-up video from the Mouse House, in which Isaac and Hawke sat down to share their live reactions to the trailer.

Sadly, the unexpected death of series star Gaspard Ulliel a couple of days later also dominated the online conversation. Ulliel, who plays Anton Mogart (a.k.a. Midnight Man), died at the age of 37 following a ski accident in the French Alps.

Disney Plus also secured this week’s third spot on the trending list with a new episode of “The Book of Boba Fett,” in which the overarching story paused to explore the alliance between the title character (Temuera Morrison) and his right-hand woman, Fennec (Ming-Na Wen). The series received a total of 146,897 engagements, just edging out this week’s No. 4 series, “Peacemaker,” which pulled in 134,019 engagements after HBO Max dropped the fourth chapter.

Insiders who were wondering how a new chapter of “Lord of the Rings” would sit with fans following the Amazon series’ lengthy development process got their answer this week when a new title-reveal trailer hit the internet and caused a frenzy with viewers, landing the upcoming series in this week’s fifth spot.

“The Rings of Power” debuts Sept. 2 and although the trailer offered few clues for eagle-eyed viewers, thousands of people retweeted and liked it, proving that fan anticipation is indeed alive and well.

A new age begins September 2, 2022. Journey to Middle-earth with The Lord of the Rings: The Rings of Power. #LOTRonPrime #LOTR #LOTRROP pic.twitter.com/KWAokaVeWW

Ricky Gervais’ morbid comedy “After Life” also made the Top 10 this week, nestling into the sixth spot following the entire third-season drop on Netflix on Jan. 14. It seems as though viewers caught up on all six episodes over the weekend, propelling the comedy-drama onto this week’s list. Gervais himself was quick to lead that banter, sharing outtakes and retweeting comments from fans in a sweet way that may have been shocking to those used to the comedian’s drier commentary.

I will never get over the reaction to #AfterLife and I'll probably never better it. Maybe I should retire. Or die.
Yes. That's my cunning plan. Please use this photo on the news. Thanks. Best fans in the world ❤️ pic.twitter.com/TO4iRN8IaF

Netflix’s “Ozark,” which dropped the first part of its fourth and final season on Friday, was another new entry on this week’s list. Viewers quickly zipped through the first seven episodes and hopped online to dissect the shocking (no spoilers) cliffhanger finale, launching it into the ninth slot.

Me pointing out the items inside the O, at the start of #Ozark pic.twitter.com/AbDIO6F4RS

Narrowly beating the series, but not quite surpassing Netflix’s Korean drama “All of Us Are Dead,” was “The Real Housewives of Salt Lake City.” The reality show landed at No. 8 this week after racist, now-deleted social media posts from newest cast member Jennie Nguyen surfaced.

Nguyen further baffled viewers when she revealed on the show that she has anger issues and once broke her husband’s ribs, solidifying this season of the series as one of the wildest in the franchise’s history.