Plus Janet Jackson, ‘South Park’ and ‘Mandalorian’ crack the Top 10. 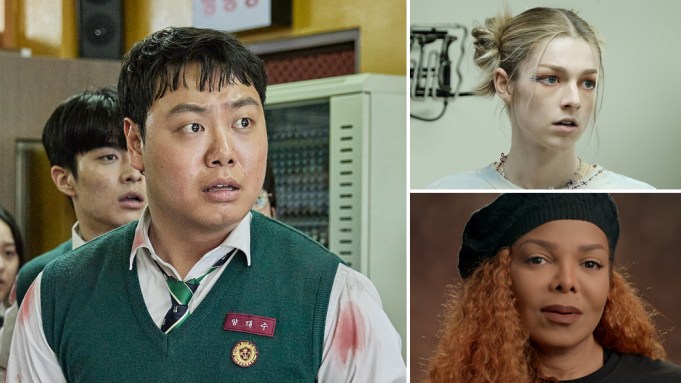 The debut of Netflix’s latest South Korean drama, “All of Us Are Dead,” on Friday led to a massive upswing in user engagement on Twitter over the weekend, landing the series at the top of Variety’s Trending TV chart for the week of Jan. 24 – 30. There, it usurped HBO’s “Euphoria” in the No. 1 spot for the first time in four weeks.

Anticipation began building for “All of Us Are Dead” when Netflix dropped its wild and gory trailer in mid-January, and with all 12 episodes available to binge over the weekend, there was plenty to chat about online. The inventive series (which is based on a digital comic from Webtoon) offers a new take on the zombie drama thanks to its high-school setting. There, a group of teen survivors attempt to hold onto their lives during a gruesome apocalyptic event, and many viewers raced through the episodes to avoid spoilers.

The long wait is over! Today is finally Netflix Zombie Series #AllOfUsAreDead D-DAY!!! 🥳

The drama will premiere later on Netflix with 12 eps. pic.twitter.com/Ys9T62YYPj

Given the recent success of another Korean drama, “Squid Game,” with North American audiences, inevitable comparisons between the dramas also sprung up online. Fans were particularly struck by actor Lee You-mi, who appears in both series in opposite roles.

damn she was a sweetie in squid game but wtf she’s damn annoying here in #AllOfUsAreDead??

like theres always those annoying character in a zombie apocalyptic show pic.twitter.com/I6tksfezBc

While “All of Us Are Dead” easily topped the chart with more than 395,000 engagements this week, fans were still dissecting the recent plot twists in HBO’s “Euphoria,” which landed in second place with nearly 299,000 engagements. “The Book of Boba Fett” notably settled into the third spot, however, as the Disney Plus series veered from its title character to deliver a new “Mandalorian”-centric episode (directed by Bryce Dallas Howard) that followed Pedro Pascal’s character instead.

Wednesday’s ep, “Chapter 5: Return of the Mandalorian,” also led to “The Mandalorian” unexpectedly jumping into the seventh spot on this week’s chart. The two Disney Plus shows collectively amassed nearly 226,000 engagements, as fans mused about how much they miss the Baby Yoda series and are still torn on the latest “Star Wars” installment.

Guy sure knows how to make an entrance! #TheMandalorian #TheBookOfBobaFett @disneyplus https://t.co/NYc5R4nE1t

Hitting this week’s fourth spot on the TV chart was “Peacemaker,” which dropped its latest episode on HBO Max on Thursday, kicking off the back half of its eight-episode, first-season run. Eagle-eyed viewers were particularly celebratory over the apparent confirmation of Kite Man in the DCEU, thanks to a newspaper clipping spotted in the episode.

In other anticipated moments this week, Janet Jackson’s long-awaited documentary on Lifetime/A&E finally premiered on Friday and Saturday, hitting the fifth spot on Variety’s chart. The project, which has been five years in the making and is timed to the 40th anniversary of her self-titled debut album, features the performer candidly chatting about some of the biggest moments in her life. From that now-infamous Super Bowl moment, to her relationship with her father, Joe Jackson, to her reported “secret baby,” to the revelation that David Bowie once offered her brother Michael Jackson drugs, everything was on the table.

Another show famous for putting it all on the table, no matter how controversial, cracked this week’s Top 10. “South Park,” which makes its 25th season debut on Comedy Central on Feb. 2 as part of creators Trey Parker and Matt Stone’s lucrative $900 million six-year deal with ViacomCBS’ MTV Entertainment, continued to give fans an early taste of what to expect.

The series has been using a 30-piece orchestra to recreate some of the more famous songs from the animated show, which this week included a rendition of its 1999 song “Kyle’s Mom’s a Bitch” and an iteration of the 2012 ditty “Jackin’ It in San Diego.” The official account shared both to further promote its upcoming anniversary season and to drive fan engagement with a reminder to tune into the premiere this week.

A 30-piece orchestra performs a rendition of "Kyle's Mom a Bitch". The 25th season of South Park premieres Feb 2 at 8/7c on Comedy Central. pic.twitter.com/toZ3J8jUUS

A 30-piece orchestra performs a rendition of "Jackin' It in San Diego" from Season 16 Episode 5, BUTTERBALLS. Don't miss the 25th season of South Park, premiering on Wednesday at 8/7c on Comedy Central. pic.twitter.com/3XcM8MWtnz

Rounding out this week’s Top 10 were two animated series, “The Legend of Vox Machina” on Amazon Prime and anime offering “One Piece” on Netflix and Hulu.