‘Abbott Elementary’ Was Most-Tweeted Show During 2022 Emmys, Sheryl Lee Ralph Was No. 1 Cited Nominee on Twitter 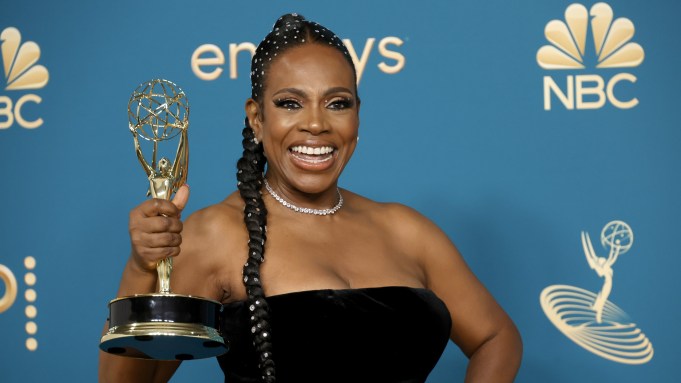 “Abbott Elementary” didn’t take home the trophy for comedy series at the 2022 Primetime Emmy Awards — but the breakout sitcom from Quinta Brunson won the night on Twitter.

On Monday evening, the top-tweeted TV show among U.S. users was “Abbott Elementary,” according to Twitter. And Emmy night’s top-tweeted nominee was Sheryl Lee Ralph — with more than 150,000 mentions on the social network — who won the supporting comedy actress award for her turn as Barbara Howard in “Abbott Elementary.”

“To anyone who has ever, ever had a dream and thought your dream wasn’t, wouldn’t, couldn’t come true, I am here to tell you that this is what believing looks like,” Ralph said in accepting the award.

The No. 2 most-tweeted show during the Emmys was HBO’s “Succession” (drama series winner), followed by Apple TV+’s “Ted Lasso” (comedy series winner) in third place. Coming in at No. 4 was AMC’s “Better Call Saul,” which had seven nominations this year but didn’t receive any awards (and has never won an Emmy).

ABC’s “Abbott Elementary” stars Brunson as an avid second-grade teacher doing her best to support the students of her underfunded Philadelphia school. Season 2 of “Abbott Elementary” is set to premiere Sept. 27. The series is produced by Delicious Non-Sequitur Productions in association with Warner Bros. Television and 20th Television.

According to Twitter these are the top retweeted posts from the 2022 Emmys on Sept. 12 (based on U.S. data only):

Sheryl Lee Ralph blew the roof off the #emmys with this speech! pic.twitter.com/MFJzIqxBWC

the Emmys are tonight, so let’s never forget the time Amy Poehler convinced her other nominees to pretend they were in a beauty pageant when their category was called pic.twitter.com/QDGMS792Nb

Winning my Emmy was a career highlight, but it was also a lonely experience.

For 35 years I’ve been the only black woman to win Outstanding Supporting Actresses in a Comedy Series.

But that all changes tonight… and it’s come full circle! #Emmys pic.twitter.com/TiyCwASVTI

#AbbottElementary is grateful, honored, and proud to accept the #Emmy Award for Outstanding Writing For A Comedy Series! ✨🤩 #Emmys pic.twitter.com/aET1O0374V