ABBA’s ‘Voyage’ CGI Extravaganza Is Everything It’s Cracked Up to Be, and More: ‘Concert’ Review 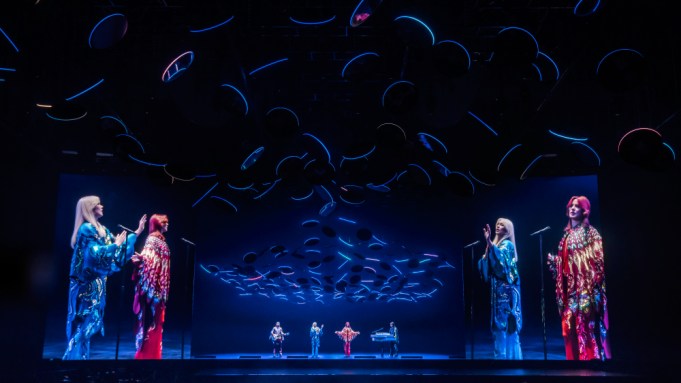 “To be or not to be, that is no longer the question,” declared ABBA co-founder and musical mastermind Benny Andersson at the start of “ABBA Voyage,” the Swedish quartet’s first “concert” in over 40 years. And if that sounds like a curiously existential way to begin a pop concert, well, this is no ordinary live show.

For a start, despite Andersson’s insistence that “This is really me, I just look very good for my age,” it’s actually his de-aged, computer-generated avatar — or “ABBA-tar,” if you must — that is speaking his pre-recorded words. Alongside him are the similarly CGI-rendered forms of his bandmates, all looking as they did — or, in truth, actually somewhat better than — they did in their ‘70s heyday.

Meet, then, the prefab four, playing a show that is billed, 100% accurately, as “a concert like no other” — which doesn’t mean it isn’t every bit as big a deal as it would have been had ABBA reformed for a more traditional concert.

Staged in the purpose-built ABBA Arena near East London’s Olympic Park, the world premiere performance nonetheless attracted royalty of both the showbiz world (Kylie Minogue, Keira Knightley, Kate Moss) and actual sovereign variety: the King and (dancing) Queen of Sweden walked the red carpet in support of one of their nation’s leading exports.

However, it was the presence of all four real-life members of ABBA — Andersson, co-founder and co-mastermind Björn Ulvaeus, and lead singers Anni-Frid Lyngstad and the usually reclusive Agnetha Fältskog — that caused the real stir, proof of the demand fueling this technologically ground-breaking (and presumably wildly expensive) new concept in entertainment. (Andersson and Ulvaeus spoke with Variety about the shows last year and earlier this week.)

The stakes, therefore, are high. If there are nerves, however, these ice-cool Swedes — and their similarly unflappable producers, Svana Gisla and Ludvig Andersson — don’t show them. And, as it turns out, there was little need to worry.

True, as the digital foursome emerge from the floor — like Doctor Who’s Tardis, the arena appears bigger on the inside, appropriate for tonight’s adventures in time and space — the spectre of “Rock Circus,” a spectacularly naff animatronic Madame Tussauds attraction that ran in London throughout the ‘90s, hung in the air.

At first, the movements seem a little too jerky, the lines a little too obvious. But then, just as when you saw the initially-somewhat-unconvincing dinosaurs in “Jurassic Park” for the first time, your eyes adjust, the willing suspension of disbelief kicks in, and they begin to feel like living, breathing musicians, rather than the product of 160 motion capture cameras and one billion computing hours by Industrial Light & Magic.

Certainly, the crowd has no problem giving these computer programs a round of applause, a standing ovation or a shrieked declaration of undying love. This, after all, is their chance to witness something most of them had never seen before, and all of them thought they’d never see again – some of the greatest pop songs of all time delivered, at least tangentially, by the original protagonists.

And these avatars certainly capture ABBA’s original exuberance, minus the Jurassic tendencies that tend to blight decades-after-the-fact reunions in the real world. The pre-publicity stressed these weren’t holograms, and that’s true — these digital doppelgangers look almost indistinguishable from real people from every angle, with each tuft of hair and outlandish ‘70s costume rendered in occasionally terrifying detail. They can dance, they can jive, they can even make bad jokes about pausing for costume changes — and the crowd are having the time of their lives, teetering on the brink of delirium throughout, despite their majority VIP status.

But then these songs tend to do that to people. After a slow-ish start with the lesser-known songs “The Visitors” and “Hole in Your Soul,” the set delivers the hits just like any ABBA tribute act. However, some notable classics, from “Super Trouper” to “Money, Money, Money” and “Take a Chance on Me,” are absent — smart money is surely on versions of these already being in the can for future setlist tweaks. But any quibbles are drowned out by a youthful, 10 piece live band — put together by Keira Knightley’s husband, James Righton, formerly of “new rave” sensations the Klaxons — that means “S.O.S” and “Does Your Mother Know?” have rarely sounded so punchy. 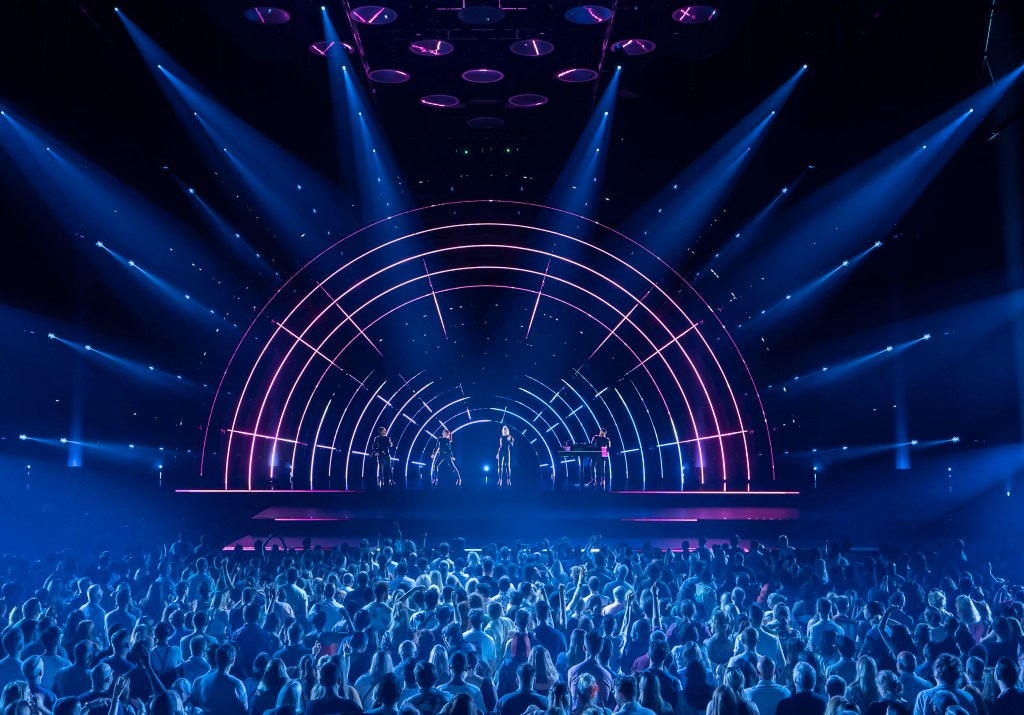 Meanwhile, the accompanying visuals are out of this world: extravagant light effects, interstellar backdrops and CGI Tron costumes mean that, in the unlikely event you are underwhelmed by splendid versions of “Knowing Me, Knowing You” and “Voulez-Vous,” there’s always something to look at.

The budget doesn’t seem to have quite extended to a full avatar show — there are some bizarre, animated interludes, possibly designed to boost the bar takings, while “Waterloo” simply features joyous archive footage from the very beginning of the band’s journey into the public’s affections.

This “Voyage,” however, is ultimately about more high-tech pleasures. It succeeds so well that you would be surprised if other entertainment centers weren’t already queuing up to host the show (which is booked in London until at least this time next year), and if other groups with pan-generational fanbases and aging personnel weren’t already exploring something similar. 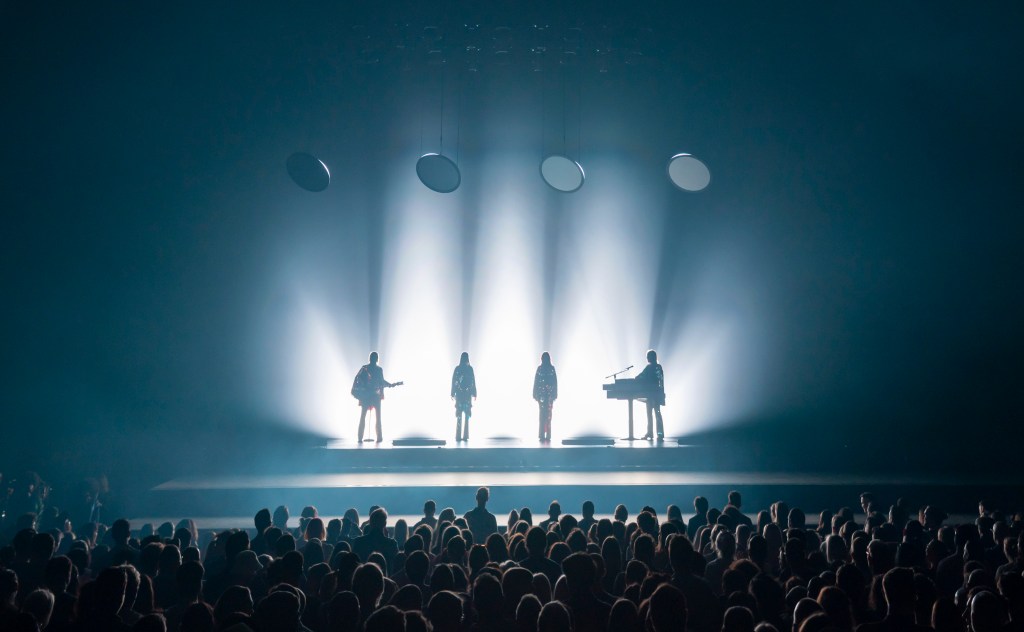 By the time the closing salvo of “Dancing Queen,” “Thank You for the Music” and a genuinely emotional “The Winner Takes It All” arrived, the crowd was so immersed that a digital rendering of ABBA as they are now fools almost everyone into believing the real Agnetha, Benny, Björn and Anni-Frid are onstage — that is, until the four of them really did shuffle on a few seconds later.

After 90 minutes with their younger selves, it feels strange to see them like this – mostly grey-haired, Frida with a cane, all suddenly rendered mortal like the rest of us. But it perhaps makes sense of why they embarked on this ludicrously ambitious project, rather than simply getting the band back together.

We’ll sadly never know for sure, but maybe, just maybe, “ABBA Voyage” will turn out to be even better than the real thing..