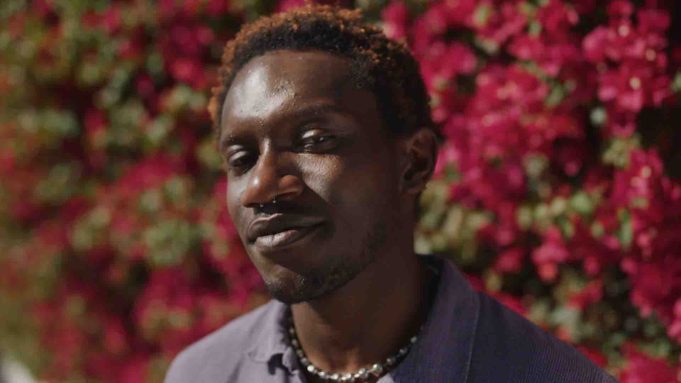 Movies centered on queer and transgender characters are still few and far between. And when members of these marginalized communities do make it to the screen, their stories can be suffused with a dark and somber tone.

The film tells the whimsical tale of Nicki, a slightly bougie transgender woman living in Los Angeles who desperately needs money for breast augmentation surgery. With no funds forthcoming from an unreliable sugar daddy, she swallows her pride, rolls up her designer sleeves and takes a job at her estranged mother’s run-down restaurant in Koreatown.

“We wanted to tell a story about trans people that you don’t see often, one that really strays away from tragedy and the harsh realities of the world,” says Komolafe, who identifies as queer but not transgender. “Coming from our perspective, we see that harshness a little too often. We don’t need to go to the movies to be reminded of that.”

While Komolafe packed the film with plenty of comedy and lighthearted touches like the score’s sparkling xylophone, its plot focuses on a highly sensitive subject: Nicki’s struggle to win validation and support from her mother. It’s a parent-child relationship that many LGBQT individuals can identify with.

“Just wanting our parents to accept and support us for who we are is something that the writer and I talked about a lot,” Komolafe says. “It’s a fantasy for queer kids to have that type of intimate connection.”

“Indeed’s mission is to help people get jobs. We understand how meaningful a job is in someone’s life,” says LaFawn Davis, Indeed’s senior VP of environmental, social and governance. “‘Tofu’ is a beautiful story that incorporates the importance of social acceptance and family difficulties, highlighting trans voices while underscoring the meaning of work. Indeed has a commitment to an equitable, psychologically safe environment where everyone belongs.”

By zeroing in on BIPOC filmmakers like Komolafe and providing them with financial backing and educational support, the Rising Voices program is breaking down structural roadblocks and giving artists from underrepresented communities a much-needed opportunity to grow in the industry — as well as a chance for underserved audiences to finally see themselves portrayed on screen.

“A lot of these structural issues lead to a lack of identity for a lot of people,” says Komolafe. “These structures are keeping us in boxes and ways of being. My goal is to help people break free of them.”

Komolafe says Rising Voices gave him “infinite opportunities,” one of which was the chance to learn how to deal with the myriad of challenges that come with helming a well-funded, fully staffed professional production.

“Being on a set where you’re able to pay people and not just working with your friends who are down to really grind it out changes so much of the dynamics,” observes Komolafe. “You need a lifeguard if you want to be in the pool. You need a fire department person if you want to get a crazy crane shot. You don’t really learn that in a class or an online video. You have to just be there, doing it.”

The $100,000 budget provided by Rising Voices enabled Komolafe to rent a house to serve as the setting for Vicki’s poolside chat that opens the film. It also served as the home she shares with her mother, providing a contrast between her upscale aspirations and her down-to-earth background. But two weeks before cameras were set to roll, the location fell through when the owners decided they didn’t want such a big crew in their house. Fortunately, he managed to secure a suitable house in the L.A.’s San Fernando Valley four days prior to the start of production.

As frustrating as the last-minute location switch was, it was nothing compared to the shock Komolafe experienced when he lost his director of photography to the pandemic on the eve of the first day of shooting. Although the DP didn’t test positive for the coronavirus herself, she had been in contact with someone who had, and COVID-19 protocols dictated that she couldn’t be on set. Luckily, by the following morning Komolafe and his executive producers had found a replacement DP and production was pushed back a mere five hours.

Komolafe discovered that, while he is accustomed to serving as a shoulder to cry on for friends, providing emotional support and creative direction for a 40-plus person crew was a next-level challenge.

“I was very aware that I couldn’t actively be freaking out because then everyone else would,” says Komolafe. “You’ve got to have the answers; you’re the problem-solver.”

In the end, Komolafe found that Nicki is more than just a fictional character he worked hard to bring to the screen — she’s a personal role model.

“She knows what she wants and she’s going to get it, and she’s not ashamed or afraid of anyone,” says Komolafe. “And I think that’s the type of queer character that I’m trying to write and also trying to embody.”