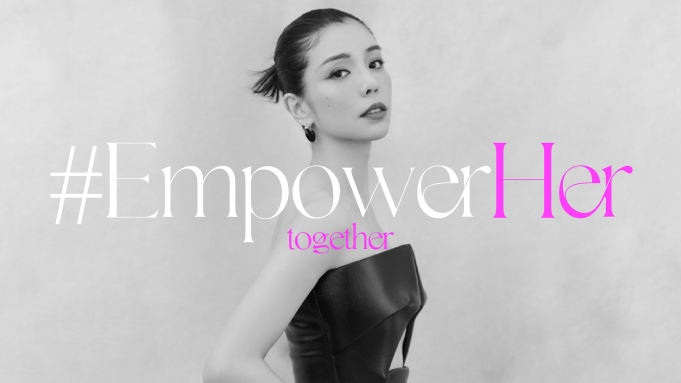 Captivating audiences with her powerful voice and masterful versatility as an artist, Tia Lee recognized from an early age that she was destined for international greatness.

Born in Taipei, Taiwan, the global singer, film and television actor and fashion icon has been building a name for herself across industries and mediums alike, balancing the multifaceted nature of her talent with her creative drive to continue expanding her legacy. As a leading figure in Chinese popular music, a loosely defined genre also commonly referred to as C-pop, Tia credits her success in part to her confidence and willingness to take risks.

“Life is about continuously stepping out of your comfort zone,” she says, quoting a mantra that has become her North Star throughout her career. “You will see all the beautiful things this world has to offer when you do.”

Most recently, the artist stirred up speculation among eager fans after wiping her social media clean (a strategic move that often indicates a new project is on the horizon) and kicked off an unprecedented prerelease campaign. To build anticipation for her then-forthcoming single “Goodbye Princess,” Tia teamed up with legendary animation director Sunny Tang (“Astro Boy”) and award-winning creative director Tony C. Miller to create a six-part animation and motion images series.

In less than a month leading up to the full release of Tia’s “Goodbye Princess,” the ingenious series — which combines animation, music and fashion videography — went on to garner over 100 million views, setting a new global record for a music video prerelease campaign.

After building much anticipation, the deeply personal track was released this month, with the heartfelt anthem signaling a new chapter for the solo artist, one where growth, strength and reinvention take center stage.

“The song is an official farewell note to my old self,” Tia says. In addition to welcoming a new beginning, the singer-songwriter drew from themes of female empowerment to “encourage all women to bravely embrace their true selves, become stronger and build a more promising future.”

Alongside the release of “Goodbye Princess,” which was produced by Swizz Beatz — the GRAMMY® Award-winning producer’s first foray into C-pop — Tia also released an ambitious music video created by Los Angeles-based experimental multidisciplinary studio, Actual Objects. The accompanying visual is set in a hyperpop fantasy world, depicting Tia’s metamorphosis from “being a sheltered and scrutinized icon” to a “darker, yet braver, persona ready to take on the world.”

In the first 12 hours of the song’s exclusive global music video premiere on YouTube, “Goodbye Princess” garnered over 2.3 million views, a record-breaking achievement for the C-pop genre at large. The music video has climbed to over 63 million views in the first ten days across platforms since its debut. With no sign of slowing down, “Goodbye Princess” solidifies Tia’s return as a global C-pop phenomenon, a testament to her hard work and her dedication to rising above past challenges.

In tandem with the release of “Goodbye Princess,” Tia has also announced the #EmpowerHer campaign. In the spirit of women supporting women, and as a vehicle to continue spreading her important message of empowerment, Tia has partnered with four different women-centric charities, helping raise awareness for each of their respective missions. So far, she has joined forces with Beats By Girlz and Women in Music in the United States, Daughters Of Tomorrow in Singapore, and Teen’s Key in Hong Kong, all of which are committed to empowering and supporting women and girls around the world.

“My goal is to encourage women to believe in themselves, be brave, and move past the obstacles that hold them back,” Tia says.

To help raise awareness of the philanthropic #EmpowerHer campaign, the release of “Goodbye Princess” has since sparked a viral dance challenge on TikTok, with each view helping raise money for the #EmpowerHer partner charities. Creators on the short-form video platform have risen to the challenge of covering the signature choreography to “Goodbye Princess,” which features energetic and rhythmic full-body movements and a signature “goodbye” hand gesture. The upbeat, unabashedly feminine choreography embodies a revitalization of Tia’s mind and body after overcoming challenges in the fashion and entertainment industries, setting her free to express her own strength.

Leading TikTok creators from around the world — including Hannah Balanay, Judah Metu-Teaukura, Layla Akil and Evie Meg, who are among the most popular creators in Australia, New Zealand, the Middle East and the U.K., respectively — have joined the #EmpowerHerDance.

“I believe women can wear what they want, say what they want and love who they want,” Tia adds, commenting on the uplifting messaging behind her #EmpowerHer movement and recent music. “There are constant references to debunking the myth and strictures of fairy tales, and I hope to modernize these narratives and encourage women all over the globe to bravely embrace their true selves.”