‘The White Lotus’ Finds Inspiration in the Repugnant and the Relatable 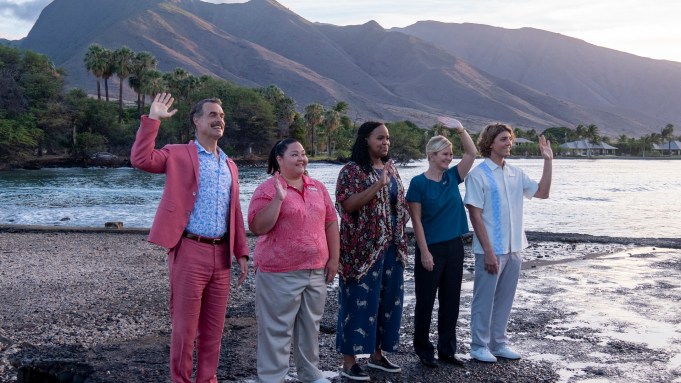 The success of HBO’s limited series “The White Lotus” is built on how deftly it examines the intricacies of human nature, with biting scripts by creator and director Mike White, and brilliant performances by its ensemble cast. Co-stars Murray Bartlett and Jennifer Coolidge agree that the experience of portraying characters who are battling existential crises, set against a backdrop of beauty, luxury and privilege, was unlike any other.

“It’s really holding a mirror up to some of the ugliest sides of our nature in such a cutting way,” says Bartlett in a video conversation with Variety. Bartlett plays the polished, put-upon resort manager Armond, a character slowly self-destructing under increasing pressure. But even the most seemingly unsympathetic members of the ensemble reveal certain empathetic aspects.

“The White Lotus” brings a collection of monied, privileged and oh-so-entitled members of the elite to an exclusive tropical resort, ostensibly for a relaxing island getaway heavy on the pampering. But from the moment their luggage is dropped off, the travelers’ pent-up psychological and emotional baggage begins to unpack itself, whether they want it to or not. This causes even the most innocuous failure to register as a perceived affront from the hotel staff — many of whom are wrestling with their own inner demons and frustrated ambitions.

“A lot of the characters are very obnoxious and kind of hateful,” Bartlett adds. “But I feel like there’s always moments where you’re like, ‘Oh, maybe they’re OK,’ or they say something and you’re like, ‘Oh, I relate to that.’ That’s the brilliant thing: If they were just two-dimensional caricatures, then it would be hard to relate to them, or it wouldn’t hit as close to home.”

Within the have/have-not friction, White crafts a microcosm of class conflict, a contemporary “Downton Abbey,” shocking but recognizable, funny but painful and laced with outrageous sex, trippy drugs and scatological revenge.

“Mike White is such a good observer of the plight of people that are very rich, and that is: The very rich can delay having to look at their demons,” says Coolidge, who plays the uberwealthy and grief-ravaged Tanya, seeking to salve the pain of her abusive mother’s death in an endless whirl of dubious holistic healing treatments. Chatting with Variety via video, she succinctly sums up this “plight” of the wealthy: “You can supply yourself for your entire life with distractions from really getting to the core of anything, because when you’re rich, you can really do anything at all. And that leaves it wide open to just take up your life with silly things.”

Even the most indulgent, out-there characters, like Tanya, have the opportunity to peer into their own abyss. “She actually does have to face herself,” Coolidge says. “She actually does get this incredible moment where she’s brave enough to face everything she probably feared her entire life.”

“I had a mother that passed away early in life. I was in my early 30s, and I could definitely relate to so much of what Mike wrote,” recalls Coolidge, who’d also grown up knowing people in her community who were locked immutably in their grieving. “I just remember that being embedded in my brain, about how people, they’re sort of locked into a sadness that they’re really unable to climb out of.”

Bartlett, too, recognized the all-too-human frailties that fueled Armond’s even more extreme, outrageous behaviors. “I’m not Armond — although I think Armond does live in my head somewhere. I’m embarrassed to say, but I related to a lot of aspects of him,” he chuckles. “I worked in the hospitality industry. I have my own experiences, which I revisited in my mind, of being in those kind of situations with obnoxious guests.”

Frisson most notably ensues on “White Lotus” when the wants and needs of the privileged guests collide — materially or spiritually — with the tenuous dreams and tested dignity of the employees. Amid the show’s staggeringly deep bench of performers, Bartlett and Coolidge stand out, as Variety’s chief TV critic, Carolyn Framke, enthused: “Throughout the series, both Armond and Tanya teeter on the edge of total nervous breakdowns before swan diving straight into them to drastic effect. Bartlett and Coolidge are exceptional as they embrace every twisted knot of conflict inherent in their roles.”

The project, says Bartlett, developed in the thick of a particularly tumultuous year — politically, socially and in the midst of a deadly pandemic — when it seemed the whole world was stressed to the point of meltdown. “We were grappling with so much in that year. Plus, we’re in an environmental emergency,” he explains. “There’s this feeling of being overwhelmed that I think that we’re all familiar with. As you see in the show, nothing is sacred. Nothing is left out — just going all the way,” adds Bartlett. “I think it’s very relatable to what we’ve all been going through. … We were very committed to trying to get that balance right.”

Renowned for her razor-sharp improvisational skills, Coolidge did get to experiment on set. “Sometimes people say to me, ‘Did you improvise that line?’” she notes. “I did throw in a couple things.” But Coolidge admits she was less reliant on her own in-the-moment comedy inspiration than on previous projects, and credits White, the writer and director of every episode, for the script’s most hilarious moments. “I have to say, the best lines in the show are Mike White’s.”

“He’s such a brilliant observer of human behavior and human nature, and I think this is some of his finest stuff,” agrees Bartlett. “It can be very confronting, because it’s really funny. … I feel like his humor is like, ‘Ha ha ha — oh, my God!”