‘The Mitchells vs. the Machines’ Pushes the Medium of Visual Storytelling Forward 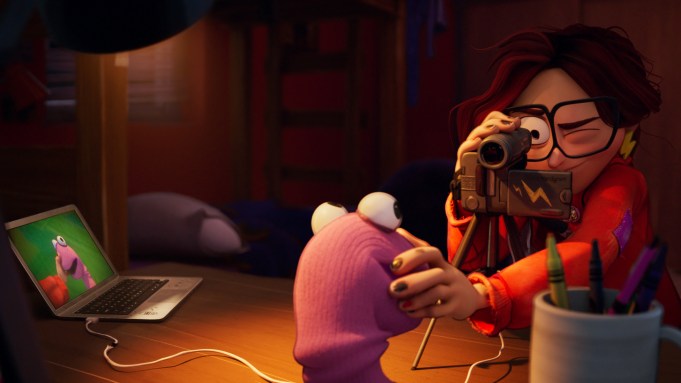 “Make the movie unlike anything that’s ever been done before.”

Scrawled across a production whiteboard, this guiding principle led Sony Pictures Animation’s “The Mitchells vs. the Machines” to break barriers with its fresh perspectives, unique artistry and richly drawn characters.

Released on Netflix last April to acclaim from audiences and critics alike, the feature has become one of the most honored animated films of the season, with 30 critics group wins, nominations for best animated feature at the BAFTAs and the Academy Awards and eight nominations for the animation industry’s Annies — a testament to the project’s bold animated style and the wide appeal of its storytelling.

The Bonds and Inspiration of Family

The concept starts off grounded and relatable, with the Mitchell family driving cross-country to drop artsy daughter Katie off at film school. But the bonding endeavor turns into a fight for survival when a tech company’s product upgrade triggers a robot uprising.

Rianda brought on his former CalArts classmate Jeff Rowe to co-write and co-direct the story.

“Mike’s goal from the beginning was to make it very much about real people,” Rowe says.

Rianda set out to assemble an animation team whose creativity would be less impacted by outside influences. In other words: noobs.

A former CalArts professor, the first-time feature director brought together a crew from the television world as well as recent graduates, offering them a shot at a studio movie — and often their first leadership roles. It allowed them the opportunity to mix 2D, 3D and live-action components.

“We had a similar energy. It was kind of contagious!” she says. “We want to do all these things that we love, that we want to see on screen that we haven’t seen.”

As an artist, Katie constantly doodles on everything: her pants, shoes, fingernails and body. It only makes sense, then, that Katie, as an aspiring filmmaker, also draws on top of the movie’s 3D frames, animating her life in real time.

When she and her younger brother Aaron communicate with their signature dinosaur roar, green doodles of dino heads pop up. When she feels a strong emotion or comes up with an idea, scrawled hearts or lightning bolts float next to her head. And when she hatches a plan to escape the robots that are hunting her family, she envisions the sequence as an action movie, complete with a hand-drawn title card that briefly pops up behind her.

Katie’s 2D sketches bring the audience directly into her head, allowing them to see the adventure through Katie’s creative lens. The innovation also adds a fourth dimension: emotional insight.

“Mike wanted the stakes to be real,” says Alan Hawkins, the film’s head of character animation. “He wanted the emotion to feel real, and that tells an animator a lot of things right away. If a character can jump up and do a cartoony take and zip out of the frame, he wanted them to have real physical challenges.”

Chris Miller, who won the Academy Award for best animated feature with Phil Lord for 2018’s “Spider-Man: Into the Spider-Verse,” says it’s time for standard convention to be put aside: “The technology is finally caught up to the limits of our imagination. And so there’s no excuse for making an animated movie that looks like every other one. It’s a medium that’s begging to have a personalized touch when anything is possible.”

Katie Mitchell: A Protagonist for Today

Impressed with a very early cut, Miller and Lord came aboard as producers a few years after “Mitchells” was in production. “We were absolutely struck by both how funny it was, and also how sweet and emotional and heartwarming it was, which are things that you don’t often see both of,” Miller says.

“It was very obvious from that first screening that Mike and Jeff put every idea they had into the film — their whole hearts,” Lord adds. “You just felt the creative energy and enthusiasm and buoyancy.”

A dedication to authenticity in character building allowed for a revelation, Rianda explains: “As we were developing the character, more and more people kept asking, ‘Katie seems gay. Is she gay?’ It became something we felt like we needed to address.”

Katie is the first explicitly queer protagonist in an animated feature from a major studio. Secondary characters in older animated feature films may have signaled as LGBTQ+, but their sexual and gender identity were left open for interpretation. Rianda says the entire crew was committed to “[showing] a gay kid in the theater that they deserved to be the protagonist of their own story.”

Katie’s queerness is never treated as anything but normal, and it’s confirmed only in a line in the epilogue — yet another example of how “The Mitchells vs. the Machines” is paving a road that’s never been taken.

“Even though the story is about Rick and Katie not seeing eye to eye, it was never about her sexuality,” Lord says. “[Her parents] love her. This is the first studio animated protagonist to be gay in a movie, and it’s a big deal in some ways. But it shouldn’t feel like one. Yes, she’s gay. And so what?”