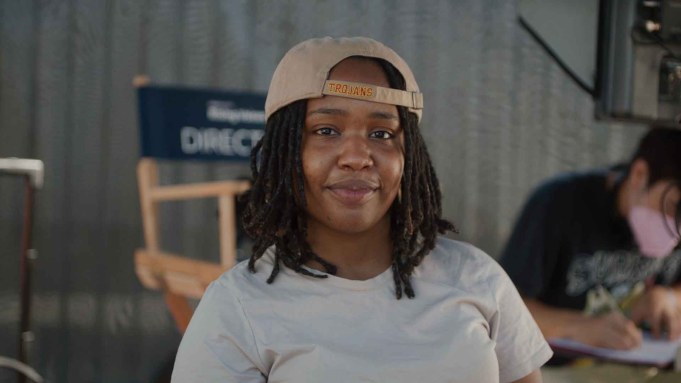 Imagine an astronaut facing impending doom on the moon, whose only connection to humanity is the voice of mission control. Who do you picture?

In writer-director Shanrica Evans’ Indeed Rising Voices short “Amina,” the titular astronaut is a Black queer woman and the voice from Earth is her wife Noa, grounded because she’s pregnant with their baby.

Neither any real-life space agency nor the astronauts of typical Hollywood fare have achieved that level of representation for gay Black people, but Evans, who was raised by her mother, grandmother and great-grandmother in Decatur, Ga., has made it her mission to create a more inclusive world through art — starting with her own community.

“When I do see southern Black women on the screen, I don’t see their full totality,” she says. “Their experience and pain are presented in ways that I don’t think encompass all their beauty and their murky, fun humanity. I want to showcase myself and the people I grew up with in our full humanness so we can gain empathy for ourselves.”

“Amina” was inspired by Evans’ personal experiences dealing with loss and grief in the wake of her father’s death when she was in her early 20s.

“It was a difficult grieving process, and there were a lot of feelings of hauntedness and loss,” says Evans, who came up with the concept for “Amina” in just two weeks. “I went through that process and found love at the end — a very ‘beyond time’ kind of love.”

Indeed’s senior VP of environmental, social and governance, LaFawn Davis, says Evans and her short represent the very reason the online employment portal invested in the Rising Voices program. “We hope to provide the platform and opportunity for BIPOC and LGBTQIA+ filmmakers to share their stories and talent with the world,” she says.

In “Amina,” Noa is wracked with grief and guilt as she listens helplessly from Earth while her wife is slowly dying more than 200,000 miles away. Engulfed in depression, she neglects the life growing inside of her, but in time, childbirth fills Noa’s emptiness with a love that encompasses her lost partner, her pregnancy and herself.

The tenderness and courage communicated in the script is the reason “Amina” was selected from 900 applicants to be greenlit for the Rising Voices program, according to Davis.

“It was a story about motherhood, love, loss and the sacrifices we make to pursue meaningful work,” she says.

The story’s depth is enhanced by its otherworldly setting, which serves as a multilevel metaphorical device.

“Usually, space and sci-fi movies are trying to speak on universal themes about relationships and family and love, and I knew I wanted to make a movie about that meeting point where grief meets love and you keep living your life,” Evans says. “These two astronauts are home for each other, even when the world isn’t home for them, or super safe or comfortable [because they are queer].”

Evans says “Amina” is meant to be cathartic for the millions who’ve suffered deep loss resulting from the COVID-19 pandemic. “After a couple of crazy years, we need to know that love is always at the end.”

“My greatest skillset as an artist is my empathy and my ability to see humans and people for their totality: the bad and the murky,” she says. “I try to craft caregivers and people in worlds that are just as flawed and fun and beautiful as humans are.”

Sisters Constanza and Doménica Castro, who produced “Amina,” were impressed with how Evans was able to produce a film of such ambition and scope with a limited schedule and budget.

“She had to make decisions she hadn’t made before in a really fast timeline, and work with teams she hadn’t worked with before,” says Doménica Castro. “The script required these bigger teams and bigger elements, and Shanrica rose to the occasion.”

Evans had a personal epiphany about a filmmaker’s responsibility for the safety of others while shooting the short’s lunar-surface scenes. An unexpected heatwave hit Los Angeles, compounding the high temperatures inside the actors’ spacesuits, and she had to make the costly decision to halt shooting and rearrange the schedule. “I realized my job as a director is to care for people,” she says. “It’s made me a far more caring director and a stronger leader.”

Since deciding to pursue directing, Evans has received numerous accolades and scholarships and won acceptance to prestigious film festivals and training programs. But she says the mentorship she’s received in the Rising Voices program has had a unique and lasting impact on her growth as a filmmaker.