Phil Tippett always had monsters on his mind.

“The first memory I have is of being in a crib and I heard a squishy sound in the hallway,” says Tippett. “There was a night light in my room and suddenly there was this three- or four-foot-tall octopus thing that crawled into my room and into my crib and fell on my head.”

While the octopus wasn’t real, it did signal the beginning of a lifetime obsession with monsters. As a kid he was forever changed when he saw the giant ape in “King Kong.”

Tippett, who is celebrating 40 years in VFX and co-founded Berkeley, Calif.-based visual effects shop Tippett Studio in 1984, went on to create countless fan-favorite characters including Jabba the Hut and the Rancor Monster in “Return of the Jedi.” He also brought to life the Tauntauns and Wampa from “The Empire Strikes Back.” Later on, he made the Raptor and T-Rex stop-motion puppets in “Jurassic Park.”

“I always wanted to be like Ray Harryhausen and make things that no one had ever seen before,” says Tippett, referring to the late legendary animator. “That idea was part of the company we created.”

All these imagined and made creatures led the VFX artist to form Tippett Studio, the company behind many of the most groundbreaking effects and animation over the past two decades. Recently, the company worked on “Black Adam,” “The Man Who Fell to Earth” and “The Orville” Season 3. It also announced the launch of Tippett Canada, based in Toronto, a post-production studio working with clients including Marvel Studios, Lucasfilm, Disney, Showtime and New Line.

As Tippett turns his focus toward directing with projects such as “Mad God” and others in development, the company has brought in new leadership to help steer it into future as it takes on content production for theme parks and 3D billboards in addition to the core VFX business. The studio just promoted and added execs: Sanjay Das is the CEO, Gary Mundell is COO and president of Tippett Canada and Corey Rosen is now exec VP of creative development.

“We’re not just visual-effects artists,” says Das. “We’re storytellers. We want to be involved in the process of storytelling. We have a fully functioning stage where we do miniatures and greenscreen. We do stop motion. We have a pedigree in filmmaking at the highest level that’s grounded in Phil’s techniques.”

The studio has ventured into new areas with the “Book of Boba Fett” billboard in New York City’s Times Square, a collaboration with ILM for a new LG OLED screen, and a billboard for “Jurassic World: Dominion.” Additionally, Tippett Studio created two animations for Times Square — one of a quetzalcoatlus landing on top of a building and the other with velociraptor characters hovering “over the edge” of the billboard and peering down into the street.

“I think the skills that our artists have can be used anywhere,” says Jules Roman, co-founder of Tippett Studio. “We’re visual creatures so the ability to create images that transport audiences is something that will always be needed. In the beginning, when we started the studio, we really thought about ourselves as creatives, artists, so it’s good that we have someone like Sanjay come on board and find new ways for us to use those skills and support ourselves.”

Adds Mundell: “We’re also working on developing partnerships with technology vendors who can help us do our best work. This has always been a company based in imagination and technology.”

As they increase work in commercial adverting, Tippett Studio is still grounded in the place where everything began — visual effects. They’ve returned to the world Tippett knows well and completed work on “The Book of Boba Fett” and “The Mandalorian” Season 2 for Disney +. Their work can also be seen on Netflix in “Locke and Key.” Marvel Studios’ “The Falcon and the Winter Soldier” was a Tippett Studio project as well.

“Tippett has always been a creative place,” says VFX supervisor Chris Morley. “If there’s one thing I can say about us it’s that we’re not afraid of anything. We’re not afraid of new technology. We’re basically pirates. We’ll use whatever we need to get the job done and we’ll get it done the right way. This way of working goes all the way back to ‘Jurassic Park.’” 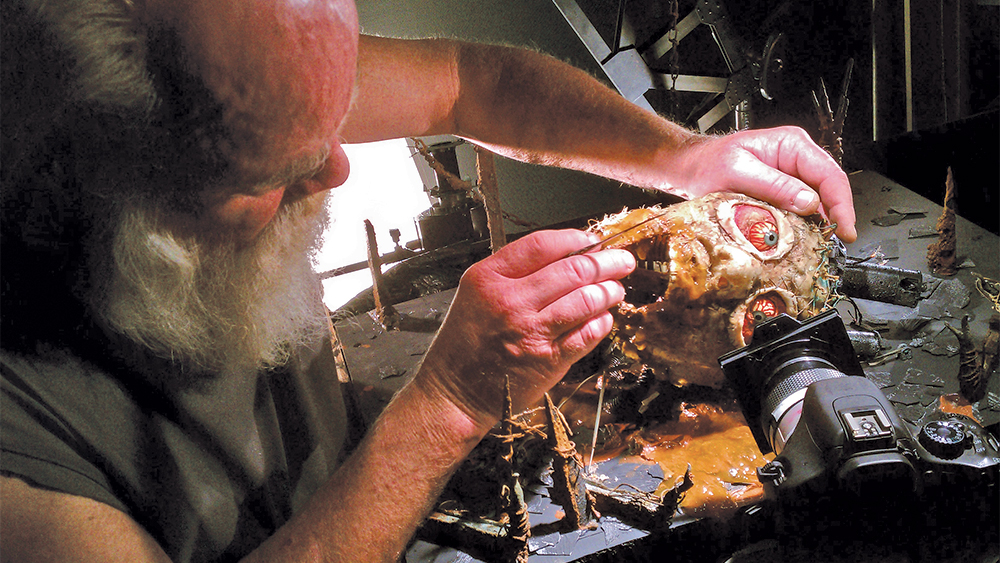