‘We’re Not Going Back to 90 Days’: Legendary CEO Joshua Grode Talks Future of Movies at Variety Power of Law Breakfast 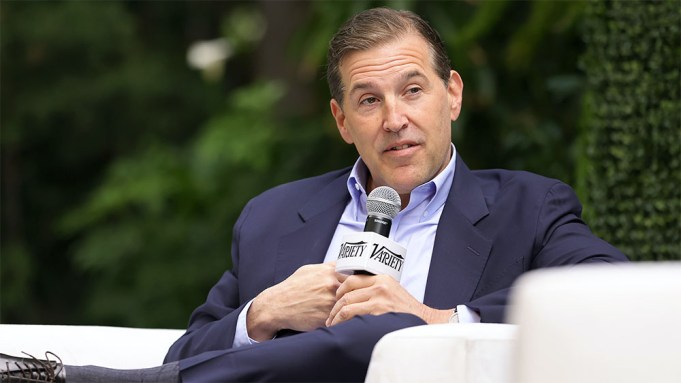 The business of moviegoing may be grappling with unprecedented, pandemic-induced pressures, but no one should underestimate the economic value of a theatrical release.

That was the strong perspective offered by Legendary Entertainment CEO Joshua Grode on Wednesday morning during a Q&A held as part of the Variety Power of Law breakfast, presented by City National Bank, at the Four Seasons Hotel in Beverly Hills.

“I think there’s going to be a very vibrant theatrical business,” Grode told Variety Editor-in-Chief Claudia Eller, who conducted the 30-minute interview. Grode, a former lawyer who took the reins of Legendary in 2018, emphasized that Legendary’s model for backing big tentpole movies relies on strength at the box office to drive pricing and fees for premium VOD, pay-one television deals and other after-market exploitation that goes on for years.

Legendary has generated solid returns for its recent film releases, 2021’s “Godzilla vs. Kong” and this year’s “Dune.” But Grode pointed to the recent success of a movie from a rival shop, Paramount Pictures’ Sandra Bullock-Channing Tatum-starrer “The Lost City,” as a sign of post-pandemic progress at the box office for superhero-free, non-franchise movies.

“A romantic comedy that exceeded everybody’s box office projections — that tells me there’s health in the theatrical system beyond huge superheroes and tentpoles that get everyone excited,” he said.

Grode and Eller remarked on the many changes for media distribution and consumption that consumers have embraced amid unusual lockdown conditions. But as much as he has faith in the ability of movies to bring ticket buyers through turnstiles in meaningful numbers, the shortening of the theatrical exclusivity window of three months was long overdue, Grode said.

“We’re not going back to 90 days,” Grode said. He noted that major studios like Universal, Paramount Pictures and others are experimenting with windows that vary from 45 days to 17 days to day-and-date streaming and theatrical releases.

He noted an opening, as new standards emerge, to carve out still more monetization and marketing opportunities.

“What a lot of people aren’t focused on is what the window around pay-one (TV deals) and home entertainment and what’s the interaction between those two things.”

Eller pressed Grode on how he wound up in the CEO seat at Legendary. As a lawyer, he represented Chinese conglomerate Wanda Group in its acquisition of Legendary. In what is now corporate legend at Legendary, Grode wrote a 20-page memo urging Wanda not to buy the production company founded by entrepreneur Thomas Tull in 2005. Wanda ignored that advice and bought the company for $3.5 billion in 2016.

A year later, as a number of the issues flagged in his memo became acute, Wanda leaders were courting Grode to become Legendary’s CEO. At first he said no, having no intention of ending his legal career. But when Wanda executives came back to him with, “Tell us what we have to do to get you to say yes,” Grode used all of his experience with industry contracts to craft a deal that his wife urged him to accept.

“She told me, ‘You’ve completely de-risked this for your family.’ It’s a calculated risk. She said, ‘Go do it,’ ” Grode recalled.

Grode inherited a company that was losing $200 million a year. His first priority was to cut overhead “dramatically” and extract the company from business activity that had little hope of ever turning a profit. Despite the hardships of the past two years, 2020 and 2021 were Legendary’s most profitable years ever.

In January, private equity giant Apollo Global Management bought a minority stake in Legendary from Wanda that has provided them with capital and strategic advantages. Eller asked Grode point blank if Legendary was still for sale.

“No,” Grode said, with certainty. “We have a very strong balance sheet and no net debt.”

The Apollo investment allowed Legendary “to get cash in the hands of management and employees,” and to make sure operational control rests with the management team.

One big lesson Grode shared with the crowd of legal eagles was the enormous difference between the work of lawyering round the clock to get a major transaction done, and the day-to-day grind of running the business.

“As thorough as we think we are, you only see the iceberg only above the water,” he said. “There’s so much more of the iceberg below the water when you’re inside running the company that you never really saw.”

In his opening remarks to the crowd, Rich Raffetto, president of City National Bank, touched on some of the same themes that Grode and Eller raised.

He noted the role that entertainment lawyers played in helping clients deal with the shock of the pandemic — shutdowns and cancellations that threatened livelihoods.

“The legal community is so instrumental in what happens behind the camera,” he said. “The global pandemic has changed the way we consume media as a population. … If the past two years have taught us anything, it’s that the (entertainment) community is resilient and artists are creative.”