The 2014 film “John Wick” has spawned several sequels, the upcoming TV series “The Continental,” the spin-off film “Ballerina,” and even video games, theme park rides and comic books. It’s now a full-fledged universe, even though it didn’t start out that way. “It was kind of accidental,” says Tim Heindl, senior VP of global marketing research at Lionsgate. “But the way the film was constructed, it was built to be expanded upon.”

The tremendous success of the Marvel Cinematic Universe (and others like “Star Trek” and “Star Wars”) has made it a benchmark for studios and networks eager to take popular intellectual property and expand it. Universes are popping up everywhere, including in TV: the DC Universe inhabits much of The CW’s real estate, “The Walking Dead” has been a boon for AMC, NBC relies on Dick Wolf’s “One Chicago” shows and “Yellowstone” is spreading out across ViacomCBS.

But building a universe requires strategy to coordinate titles, keep the umbrella property on track and not overwhelm and alienate fans. Marketing research agency Fanthropology — which consults for clients including Amazon Studios, Warner Bros., CBS, Sony Pictures, HBO Max, Paramount, Disney, Lionsgate and Universal — has just released its first-ever “Universe Handbook,” a comprehensive look at how such undertakings work, as well as a starter guide for how to set one up.

“Universes really are a critical signpost for where the industry is going today. In a time when people are competing for share of audience and there’s an explosion of so many platforms, with a well constructed universe you have bottomless IP,” says Fanthropology’s Kristie Kershaw, who co-founded the agency in 2013 and runs it with partners Kristen Longfield and Stephanie Ledbetter-Perez. “We wanted to really create a foundation of shared language terms and understanding so that everybody in a room can feel like they’re speaking from the same standpoint. The universe guide is for storytellers but also marketers and screenwriters and consumer products people.”

The handbook (download it here) zeroes in on three kinds of universes (self-contained, alternative timeline and pocket), as well as how redundancy, contradiction, ego-driven creators, lack of demand and “small universe syndrome” can lead to failure.

“Some of the things that are really important for audiences when you’re doing world building is establishing what’s called the mythos [backstory], the topos [geography and setting] and the ethos [the ethics], and that’s what orients the viewer and really makes it easy to take on the larger amount of world building,” Longfield says.

Marvel is now the prototype for this, as Fanthropology makes it clear that there’s a difference between a franchise and a universe: A franchise is connected to a character or a single group of characters, or even a theme — like the James Bond franchise, which revolves around that one character. A universe is more about world-building, and telling many different stories with different characters, locations and plots.

“Franchises work with repetition,” Longfield says. “Universes are really about exploring new types of stories, rather than going back to the same well over and over again, because you already have that familiarity that you need in the world itself.”

Where universes need guidance is making sure that audiences don’t get too overwhelmed with content, and also if there isn’t a central organizer (like Marvel’s Kevin Feige) making sure that everything attached to the universe is of the same level.

“Another issue that we’ve seen is where you have these overconfident creators that come into a universe and they aren’t serving the overall vision of whoever the central organizer is,” Longfield says. “Or sometimes you’re lacking that central organizer and that’s why the creator goes so far afield of the key story DNA and the key elements that audiences connect to… Audiences will consume a truly phenomenal amount of content in a universe without getting fatigued. The key is that everything has to be at an extremely high quality and if you don’t maintain that sense of quality, it damages the value of the universe and the audience will punish you for it.”

At Amazon, Fanthropology is helping with the spy thriller “Citadel,” from the Russo brothers. “We wanted to better understand what the worlds look like; how do audiences interplay with those kinds of different universes?” says Prime Video’s Angela Jones, director of global consumer insights and marketing strategy. “I think about ‘The Boys’ and the world we’re building with that franchise. It’s so exciting because it’s so different. And I think that’s what customers and viewers are kind of gravitating toward.”

As for “John Wick” at Lionsgate, where Fanthropology is helping build out a universe map, Heindl says he hopes to also start integrating such studies at the very beginning of a project’s life.

“I want to be able to evaluate the potential world building or universe building opportunity within a new project that isn’t based on an existing IP,” he says. “So as a way to apply that as a filtration system to the stories and scripts that we have coming in to pick our battles more strategically. Why can’t we know those key attributes or characteristics to look for sooner, in order to double down on investments where we see that potential.”

Meanwhile, Fanthropology also helped Lionsgate with the world of “Dirty Dancing.” “They worked on the ‘Dirty Dancing’ reboot that’s currently in production for us and gave us a wonderful positioning presentation that really, both did the double duty affirming the strength of the IP, but also turning a path forward while acknowledging the core tenants of the fandom,” Heindl says. “In an era where IP is king, and fans are everything as the theatrical marketplace is kind of awakening from its contraction, their work is essential to us.”

Here are a few highlights from the handbook: 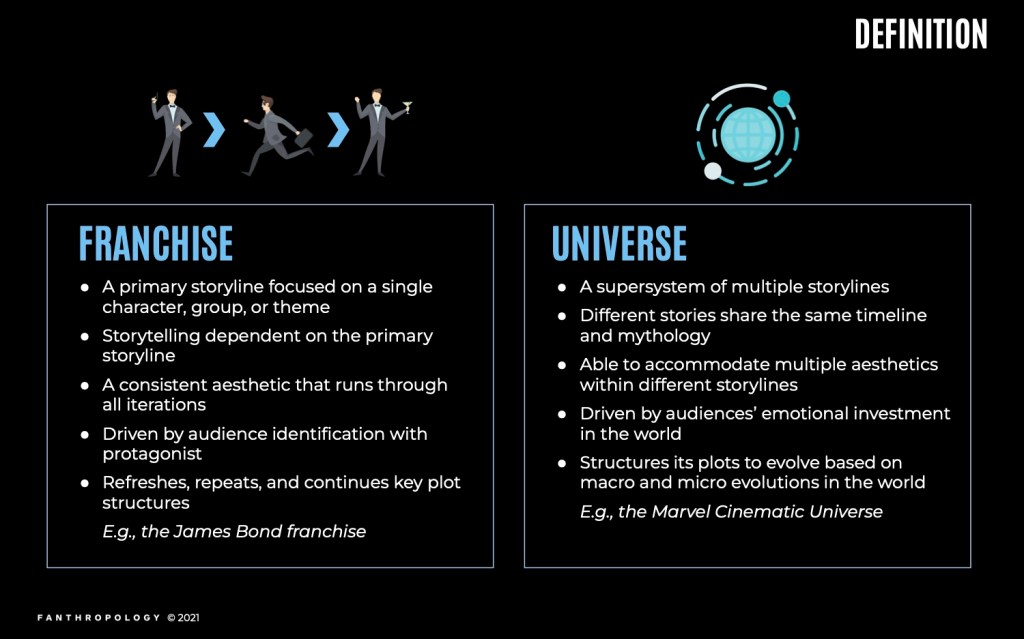