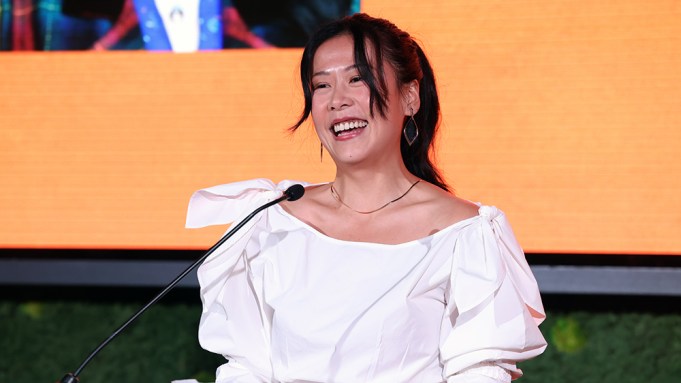 Domee Shi and six of Variety’s animation honorees gathered at this year’s Variety 10 Animators to Watch event, presented by Nickelodeon, on Thursday night.

“It’s pretty surreal that stories about dumpling infanticide and magical, furry, Canadian puberty have been embraced by all of you guys and by audiences of all ages and backgrounds,” Shi said in her acceptance speech. “But it’s also a testament to how influential our medium of animation is, in exploring specific complex themes in a way that resonates with everyone. Animation, while a fun escape, can also hold a mirror up to our own struggles, and help us understand ourselves better.”

A past 10 Animators to Watch recipient, Shi is known for the Oscar-winning short “Bao” and her feature directorial debut, “Turning Red.” She also worked on such animated features as “Inside Out,” “Incredibles 2” and “Toy Story 4.”

“I was that shy Asian kid with a stutter. But when I drew, I was suddenly powerful,” Shi continued. “Drawing is how I connected with others — it’s how I made friends. I was that girl in class who’d draw your favorite Pokémon for you.”

In April, Pixar announced that Shi would be promoted to vice president of creative, joining directors Andrew Stanton, Peter Sohn and Dan Scanlon in guiding key creative decisions at the studio.

“With this award and my new role in creative leadership [at Pixar], I will continue to champion emerging voices and pay forward all the support and mentorship I’ve gotten throughout my career.”

Latifa Ouaou, executive vice president of movies and global franchises for Paramount Animation and the Nickelodeon Animation Studio, presented the award to Shi.

“Domee’s work in animation is powerful and personal, and her creative journey as the director of ‘Turning Red’ has touched millions of kids and families across the globe,” Ouaou said. “The story is relevant, and it’s modern, and ultimately a magnificent tale about embracing the beast within despite the pressure from family and society to keep it contained.”

“These classic monsters have always captured kids’ hearts, so reimagining them through the Nickelodeon lens for a new generation rallies kids everywhere to be authentic and embrace their unique differences,” she said.