To mark the anniversary, the Swiss jeweler will craft a special edition of the Palme d’Or and honor rising talent with the Trophée Chopard. 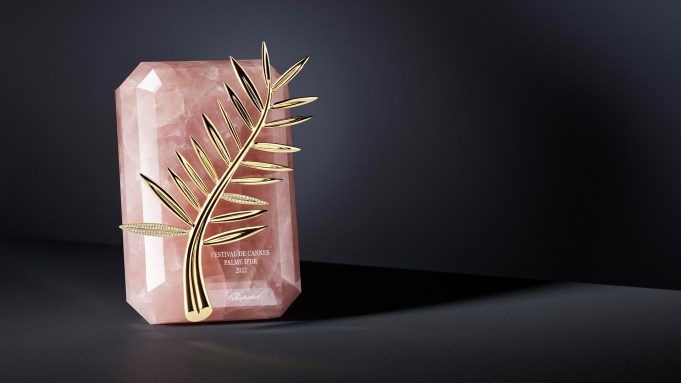 In the 75-year history of the Cannes Film Festival, the competition’s highest prize, the Palme d’Or, has brought to light some of the world’s most innovative filmmakers. This year, the award itself is celebrating its moment in the spotlight, with the unveiling of a one-of-a-kind trophy feting Swiss jeweler Chopard’s 25th year designing the coveted Palme d’Or.

To honor the double anniversary of the festival and its long-term partnership with Chopard, co-president and artistic director Caroline Scheufele is presenting a special edition Palme d’Or. Two of the golden palm leaves will be studded with diamonds from suppliers certified by the Responsible Jewellery Council. One is graced with 75 diamonds symbolizing the festival’s jubilee, while the other features 25 diamonds to immortalize the quarter-century partnership. Instead of the traditional rock-crystal cushion, the Fairmined-certified 18-carat yellow gold Palme d’Or is placed on a base made of rose quartz.

“We wanted this year’s prize to convey our deep passion and dedication to this festival and to film, so we decided to pick a colored stone that symbolizes love,” says Scheufele. “This one-of-a-kind Palme d’Or is not only a trophy, but also a high jewelry creation featuring ethical Fairmined gold, precious materials and skilled craftsmanship.”

Although the appearance of the trophy has remained largely unaltered since 1998, when Scheufele was tasked with redesigning the award, she wanted to reflect that the ideology behind the prize has evolved with the times. Since 2014, as part of Chopard’s commitment to luxury that is both civic-minded and respectful of the environment, the Palme d’Or has been crafted in Fairmined certified gold, making the award the world’s first and only ethical film trophy.

The Palme d’Or is not Chopard’s only contribution to the world of cinema. The maison’s eye for brilliance is also evidenced by the Trophée Chopard, a prize it created in 2001 for up-and-coming actors that show promise in their field. In the past two decades, talent such as Marion Cotillard, Diane Kruger, Anya Taylor-Joy and John Boyega have received the award. Cotillard and Kruger have both since returned to serve as “godmothers,” bestowing the same honor to the next generation of recipients.

The choice to spotlight rising talent was inspired by Scheufele’s practices within Chopard itself. “Just like in our workshops where there is a strong focus on training and nurturing a new generation of artisans, I think it’s very important to encourage and recognize talents who are starting their careers,” she says. “Knowing that we were a small part of an artist’s journey to a fruitful career is very satisfying. It gives me great pride to see them succeed.”

Known equally for its artistic offerings and incomparable glamour, it is the festival’s unique intersection of film, fashion and high jewelry that continues to fuel Scheufele in Chopard’s 25th year of official partnership.

“Getting to see these different art forms intermingle and interact with each other over the two-week duration is something truly thrilling, especially for the passionate cinema lover I am,” she says. “Just like films, high jewelry tells a story. At Chopard, not only are we expert craftsmen and artisans of emotions, but we are also creative narrators.”

Chopard’s Red Carpet Collection, which each year contains as many original creations as years the festival has been in existence, has long been a catalyst for unforgettable tales from the festival’s red carpet.

Take, for example, Julia Roberts’ Cannes debut in 2016, when the actor stepped out in a flowing black gown, a Chopard Haute Joaillerie diamond-and-emerald necklace — and, to everyone’s astonishment, nothing on her feet. Scheufele recalls the moment well: “She expressed her unique wit and joie de vivre with the most memorable sentence of my Cannes experience: ‘With jewels like this, I don’t need shoes.’”

Drawing from Chopard’s love for the movies, the Red Carpet Collection is inspired by the talent who will wear it as they climb the iconic red steps of the Palais — and by Scheufele’s favorite films. Inspirations for this year’s 75 pieces include “City Lights,” “To Catch a Thief” and “Cinderella.” “There is a diversity of genres, but all these movies are legendary and really marked me as a child,” says Scheufele.

The first piece to be unveiled is a diamond-encrusted rose brooch that pays tribute to the rose worn on Charlie Chaplin’s lapel in “City Lights.” “Charlie is an icon, a pioneer of film and one of my all-time favorite comedic actors,” says Scheufele. “‘City Lights’ was his first film with sound, and I wanted to mark our collection with this important moment in cinematic history.”

Chopard’s commitment to the Cannes Film Festival continues to heighten the experience for those who make the journey, from intimate celebrations honoring film and its artisans to the annual fetes that never cease to amaze.

“Being able to transport our guests to a different reality is always something we strive to do. We like to take a theme and fully realize it, to the point where our guests actually forget they are in Cannes,” says Scheufele.

For her, the festival has become an invaluable source of inspiration.

“After every great Cannes experience, I think about how we can outdo ourselves,” she says. “I start thinking and planning for the next festival the minute I come back home. It really challenges me to explore every aspect of my imagination and pushes me to seek innovation in my work.”