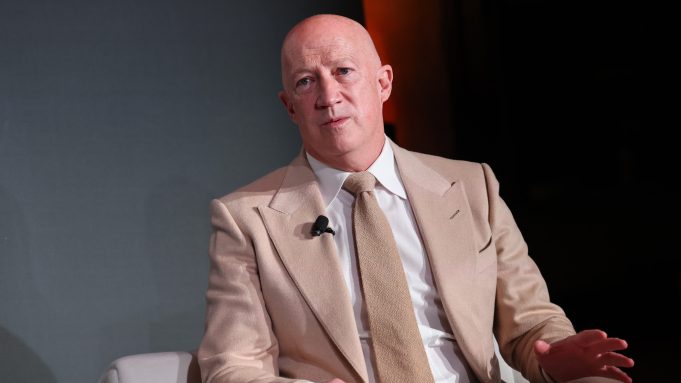 Even the mighty CAA needed some reinforcements to stay competitive in the global entertainment landscape. That was the perspective shared on Tuesday morning by Bryan Lourd, the agency’s managing director and co-chairman, during his keynote address at Variety’s annual Dealmakers event in Beverly Hills.

Lourd spoke in detail about CAA’s recent acquisition of ICM Partners during the conversation with Claudia Eller, Variety‘s chief production officer. Over the nearly hourlong interview, Lourd touched on issues ranging from the state of play for talent at Hollywood’s major studios networks, the return of Bob Iger to Disney, the possibility of CAA going public and the chance that the creative community will be crippled by a strike next year.

“There’s one thing we do better than anyone in the world,” Lourd said of CAA’s dedication to representing talent. “There are other companies who call themselves agencies, and many of them have great agents, but none of them aspire to be the company we want to be.”

ICM’s similar focus made for a good fit. “In analyzing what we thought the future was going to be, we thought alignment with people that were as good as they are, and that would be best for our clients in terms of the challenges of dealing with the size of these companies, the new players in terms of Apple and Amazon and Google,” he said.

Eller pressed Lourd about industry rumblings of culture clashes within the enlarged CAA. “It has proven to be a really, really fortunate sort of marriage,” Lourd said. He cited ICM’s stalwart publishing agents Esther Newberg and Amanda “Binky” Urban as two of the most enthusiastic new recruits. “They’ve embraced the culture the most,” he said.

“We’ve got no plans to go public,” Lourd said. “We could go public, if we decided that that’s what’s good for clients. We’re absolutely capable of and ready to go public and aren’t intimidated by it. But I think that we all believe that in this moment of such uncertainty, that the best thing we can do is get ourselves organized with the ICM folks. It’s still very, very new, and to make decisions about the opportunities in the future as we go… There are pros and cons to (an IPO) and, thankfully, we’re in a very strong position. We don’t have to make that decision, out of desperation or some sort of ego grab.”

Eller also asked Lourd about the mood among Hollywood creatives at a time when there is much drama behind the scenes about how talent is compensated when movies go straight to streaming, and TV shows no longer are sold off in syndication to turn out profits for producers. Lourd indicated that the loss of back-end profit participation for talent is a problem that talent representatives are fighting for every day rather than the huge paychecks upfront that buy out all rights for years to come.

“These are not sustainable models,” Lourd said. “And the old models were pretty damn good, in many ways. And I think there’ll be a market advantage for the larger companies that realign with artists and realign with our clients in a partnership model, as opposed to a blind we’ll-pay-you-off-and-go-away.”

Eller pointed to the whopping $465 million rights deal that Lourd orchestrated with Netflix for the rights to two sequels to the 2019 Rian Johnson hit “Knives Out.” The richness of the deal made headlines in 2021, and many took it to be a sign of content spending run amok. Lourd does not agree.

“I don’t think it was enough, to be honest,” he said. “I feel like I undersold the project.”

“Glass Onion,” the first of those two sequels, performed well in its one-week box office run last month, but Eller pressed him on whether Netflix “left money on the table” by pulling it from multiplexes so quickly. Lourd said the answer will come when “Glass Onion” debuts on Netflix next month.

“We’ll find out in January, when we know what it does on the platform and whether we super-charged it or hurt it,” he said. “I think it’s super-charged. And I think Netflix will evolve to a model – no matter what they say – that is a longer window theatrically. They’ll have to in order to compete if they want good directors and good actors in their projects.”

Lourd was candid about what he sees as a missing link of investing in development of stories and storytellers at the major studios. That role has fallen increasingly to talent representatives.

“We recognized about a dozen years ago that the studios weren’t developing the movies that our clients wanted to do,” Lourd said. “We had to turn inward and develop and hire people that had a skill set that could recognize material and find the writers and directors and stars to exist in those stories. We want to control material as long as possible so that we can create that auction market.”

The spate of new leadership and management upheaval across Hollywood’s largest companies has made for a topsy-turvy environment for the traditional business of pitching and selling.

“I do think there are people that that don’t know what they don’t know in a way that I’ve not seen, since (the early 1980s),” she said. “It’s surprising that these people that we assigned a lot of intelligence to, who have a lot of strategies, go out and you assume that they would have done their homework. That’s surprising, but that’s opportunity for us.”

In that same vein, Eller asked for his thoughts on the surprising return of Bob Iger as CEO of Walt Disney Co., less than a year after he stepped down as chairman.

“He’s the greatest of all time,” Lourd said. “It’s good for the Walt Disney Co. He’s got challenges that didn’t exist prior to his leaving… I think they did the only thing they could really do.”

Without prompting, Lourd expressed his regards for Bob Chapek, the longtime Disney executive who succeed Iger as CEO in February 2020 but made a hasty exit last month. On Chapek’s watch, Disney got into a public fight with Scarlett Johannson, a longtime Lourd client, over her compensation for the Marvel movie “Black Widow,” which debuted on Disney+ last year when theaters were mostly shuttered by the pandemic. Johansson filed a lawsuit against Disney that led to verbal skirmishes before it was settled.

“I like Bob Chapek, which might surprise some people,” Lourd said. “I think he’s a good, decent man.” Lourd went so far as to issue a public statement last year criticizing Disney and supporting Johansson after Disney accused her of being greedy and having “callous disregard” for pandemic conditions around the world.

“They attacked her character,” Lourd said when asked why he went public. “It was after months and months and months of me really trying to be constructive [with Disney] to solve the problem” prior to filing suit.

Lourd sees more consolidation ahead for other agencies. “There’s no chance that many other groups of people won’t decide that they need to grow in order to do the job for their client,” he said. “If you don’t have leverage and have a seat at the table with these companies at the highest level, it’s very difficult to represent people well.”

Lourd put to rest the rumor that Warner Bros. Discovery CEO David Zaslav offered to make him the head of Warner Bros. as that merger came together earlier this year. “No,” he said. “I’m really proud of what we built [at CAA] and I don’t think we’re done.”

One of the biggest clouds hanging over the industry is the potential for labor strife next year as the Writers Guild of America, Directors Guild of America and SAG-AFTRA all have major contracts that expire in the first half of the year. With all of the issues over compensation and changing business paradigms, fireworks are expected at the bargaining table. Lourd did not offer a prediction as to whether picket signs will be hoisted again but he acknowledged that the environment is unpredictable.

“All the unions are faced with a bigger challenge in representing our members than they’ve ever been faced with,” he said. “It’s a kind of three-dimensional hellscape that I don’t think anyone’s ever experienced between the global market technology, the buyers that exist, the experimentation going on in terms of revenue streams and [profit] generation.”

Lourd was a true trouper in appearing at the Dealmakers event after staying up all night on Monday as his daughter, actor Billie Lourd, gave birth to her second child. The arrival of grandchild No. 2 seemed to put Lourd in a contemplative mood. He shared a moment of epiphany that he experienced last month while watching Elton John take his final bows in the U.S. at Dodger Stadium. Lourd was impressed by how the A-listers in the VIP section [including Mick Jagger, Paul McCartney, Tom Hanks and Jimmy Buffett] reacted to John’s big moment.

“With each consecutive song, we had these gods of rock and gods of acting singing the words to every song, clapping to every single song and crying because they were so moved by what this man had accomplished,” Lourd said. “And it just struck me how important it is for us as representatives of artists… to support each other and be together.”

He added, “It doesn’t mean we don’t compete. It doesn’t mean we don’t fight. We have to do those things, too. Those are the rules. But I thought, if Mick Jagger and Paul McCartney, who competed with Elton John in every single way, if they’re at this guy’s last show crying and singing every word of the songs, there’s room for the arts community to behave in a really beautiful way, especially given the times we live in and how dark and scary everything is.”