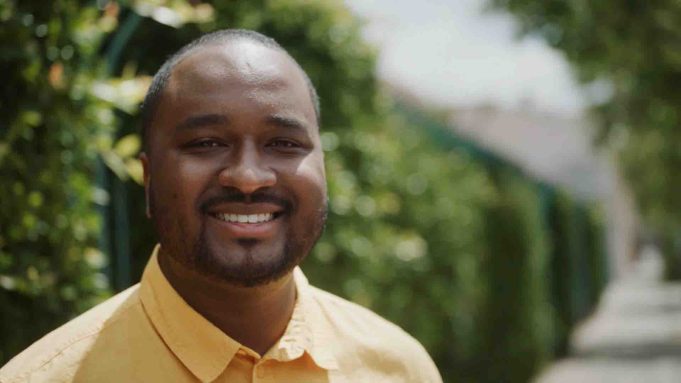 “Black Santa.” In two words, the progressively provocative title of Minneapolis-based Travis Wood’s Indeed Rising Voices short is likely to spark intrigue about this emergent filmmaker with a fresh perspective.

The 10-minute comedy follows Henry, an Atlanta father who makes an annual tradition of working as a mall Santa Claus with his son Otis as an elf sidekick. Now in his self-conscious middle school years, Otis is embarrassed by the charade until he learns that his father has a noble ulterior motive: to help teach him how to upend stereotypes and increase positive Black representation.

In both commercial and personal efforts, Wood specializes in telling stories about the Black experience. Given the theme of “the meaning of work” for the Rising Voices project, Wood saw an opportunity to further a concept he’d been prepping before the pandemic.

“The initial inspiration for ‘Black Santa’ was from a gentleman I’d met that had been a Santa for 50 years,” says Wood. “There are so many Christmas films and they’re all what they refer to as ‘traditional Santas,’ which is just a white Santa. I was excited to put a Black Santa on screen because I felt like I had never seen it before.”

LaFawn Davis, senior VP of environmental, social and governance for Indeed, says, “Travis demonstrates through ‘Black Santa’ that you can tell important stories about race and work with humor and poignancy, while still making a strong statement for change.”

Wood collaborated with mentor Calmatic and producers Constanza and Doménica Castro of 271 Films to craft a narrative that was emotionally authentic.

“The scripting process was where I learned a lot,” says Wood, who typically works on action, sports and documentary projects. “I made a lot of films, but I didn’t go to a big film school. My mentors really came through, getting a story consultant who would have long calls with me to go through and work on the script.” The film’s central father-son relationship came out of that development process. 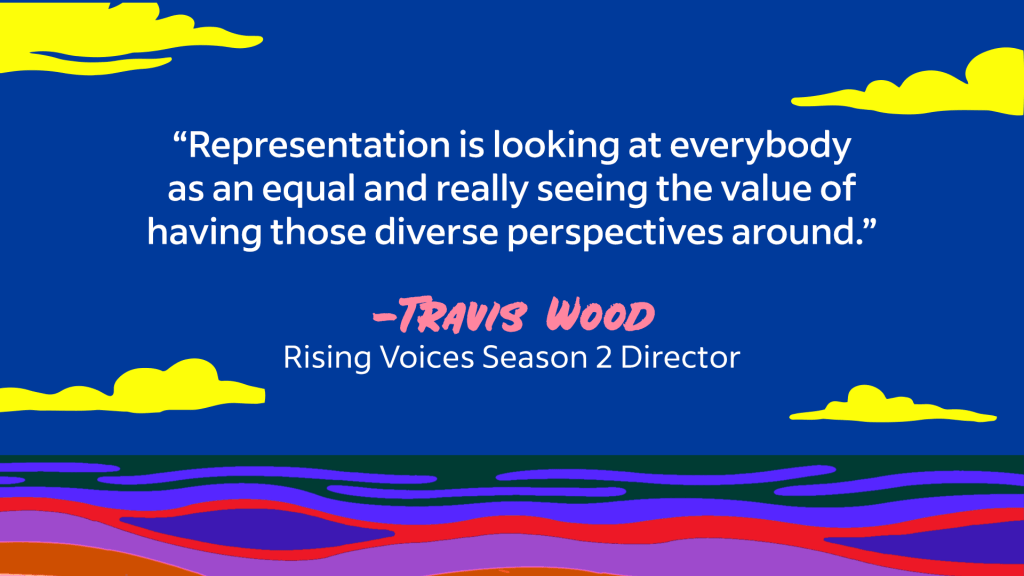 “The big question was, ‘Why does Henry do this? Why is he Santa?’ We made the son’s character to answer those questions, and it helps make it resonate better,” says Wood.

Rising Voices provides each of its filmmakers with a $100,000 budget and a $10,000 salary, but Wood says what really made the program attractive to him was the opportunity to receive hands-on guidance from established industry professionals.

“I’ve had other cash grants to do it on my own, but I think there’s really something to having people around who are pushing you and investing in the film and bringing out a level of craft that you might not have if left to your own devices,” says Wood.

One of the things that makes Rising Voices such a successful program is commitment to providing its participants with true mentorship.

“It’s a diversity program that’s not just focused on making the companies involved look good, but actually taking action to change the makeup of the industry,” says Rishi Rajani, CEO of Lena Waithe’s production company Hillman Grad, which partnered with Indeed on the program.

Wood’s previous shorts have won awards, received recognition at film festivals and aired on digital platforms, but those were scrappier, more guerilla-style productions.

“This is the first time I’ve been on a set where there’s an assistant director and an A.D. team and I’m feeling like, ‘Oh, this is what it feels like to be at that next level,’” he says. “In two months, I feel like I’ve grown more as a storyteller than I would’ve been able to do on my own, maybe ever.”

“Having a budget and a support system like this one to make a short film gives the filmmaker a lot of room to focus on directing,” observes Doménica Castro, who was a producer on the film along with her sister Constanza. “So the growth starts to show in the choices made by the filmmaker and the way his communication with the team began to flow.”

Before Wood even stepped on the set, he had elevated his career simply by earning one of the 10 spots chosen from 900 submissions to participate in this year’s Rising Voices program. Wood says it immediately helped him overcome one of the most daunting impediments to career advancement: perception.

“People see you as what they first hire you for,” observes Wood. “So when you’re a PA, I feel like that’s what you’re known as. Just being selected tells people, ‘Oh, this dude might be a pretty serious writer-director.’”

Now that Wood has provided concrete proof of his talent with “Black Santa,” his mentors believe he’s ready to take his next step up the Hollywood ladder.

“He is serious about getting the work done, but also playful along the way, and that is a really good spirit to carry through a business that is as tough as is the film industry,” says Doménica Castro. “He brings a lightheartedness to the stories he wants to tell and a cool point of view that feels relevant to our times.”