Brian Cox Calls Attention to Ukraine in Impassioned SAG Awards Speech: ‘We Should All Stand Together’ 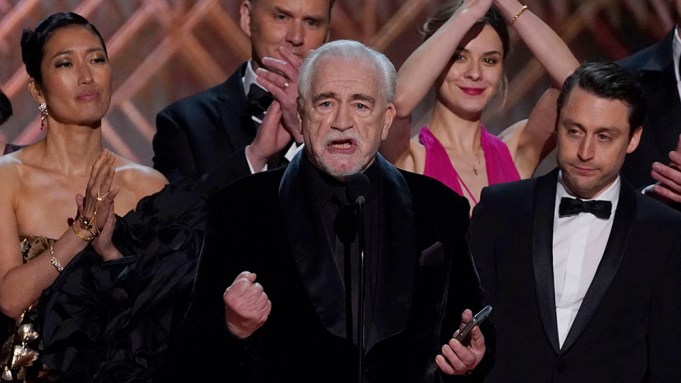 Several actors made emotional references to the situation in Ukraine during their speeches at Sunday’s Screen Actors Guild awards ceremony.

While accepting the award for best drama ensemble on behalf of HBO’s “Succession,” Brian Cox called attention to the way Russia’s actions affect actors and artists in particular.

“One other thing I would like to add,” Cox said after praising his fellow cast and crew members, “which I think is important to me and I hope important to you as actors and performers and writers and directors, [is] what’s going on in Ukraine. It’s truly, truly awful. It’s particularly awful in terms of [how] it’s affecting people particularly in our profession. The President of Ukraine [Volodymyr Zelensky] was a comic. He was a wonderful comic performer. And we should respect that. To come to the presidency was amazing. But the thing that really distressed me is what’s happening in Russia, to my fellow actors and actresses and performers and writers and critics. They are told, under pain of high treason, they cannot say a word about Ukraine. I think that is awful. I think we should all stand together also for those people. The people in Russia who don’t like what’s going on, and particularly the artists. I think we should join and celebrate them and hope that they can make a shift. Because I believe they can.”

Michael Keaton, who won best actor in a television movie or limited series for “Dopesick,” also mentioned the President’s history as a performer. “We have a fellow actor in Zelensky, who deserves some credit for fighting the fight,” Keaton said.

Earlier in the ceremony, after the opening montage of nominated films and television series, Leslie Odom Jr. reminded the audience to keep thinking of Ukraine despite the joy of the ceremony. “While tonight is a celebration, we are all at the same time holding a place in our hearts for the people of Ukraine and sending our thoughts, prayers and hopes for impending peace,” he said.

Fran Drescher, who serves as president of SAG, began her speech by “extending prayers” to the people of Ukraine. Additionally, many of the celebrities in the audience wore pins of the Ukrainian flag to show their support.

Numerous entertainment organizations have voiced support for Ukraine over the past few days as a response to the country’s invasion by Russian military forces on Thursday morning. NBC’s “Saturday Night Live” began its weekly broadcast with a tribute involving a chorus performing “Prayer for Ukraine” and decor evoking the nation’s colors of blue and yellow.