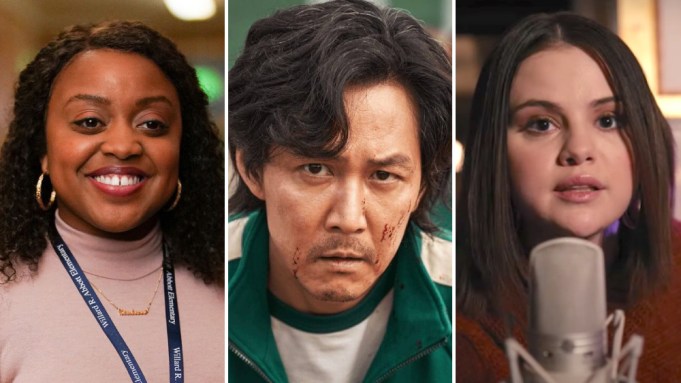 The glass is half-full in the Emmy diversity landscape. At least that’s what we can tell ourselves with this year’s Primetime nominations.

Quinta Brunson’s historic showing as the first Black woman to score three noms for comedy series, lead actress and writing for ABC’s “Abbott Elementary” is one of the brightest spots of the lot.

And how can we not mention “Squid Game,” the first non-English series to be recognized in TV Academy history? Not only did it rack up an impressive 14 noms overall, but also four acting mentions for Lee Jung-jae in lead actor, Jung Hoyeon in supporting actress and two supporting actor mentions for Park Hae-soo and Golden Globe winner Oh Yeong-su. Even Japanese director, Hiro Murai, picked up two noms in separate genre races for FX’s “Atlanta” and HBO’s “Station Eleven.”

“Squid” is only one of the glowing examples of Asian representation and how it’s trending in the right direction. In addition, Sandra Oh picked up her 13th overall acting nom for “Killing Eve,” although she’s yet to walk away with a statuette. Also carrying the torch for AAPI actors are Himesh Patel (“Station Eleven”), Nick Mohammad (“Ted Lasso”), Bowen Yang (“Saturday Night Live”) and Arian Moayed (“Succession”).

Black women are showing off their might in the industry. In addition to Brunson and Zendaya, we have Issa Rae (“Insecure”), Natasha Rothwell (“The White Lotus”) and the extraordinary double-dip of Janelle James and Sheryl Lee Ralph (“Abbott Elementary”). However, with the snubs of Sterling K. Brown for “This Is Us” and Samuel L. Jackson for “The Last Days of Ptolemy Grey,” only former winner Donald Glover (“Atlanta”) and first-timers Toheeb Jimoh (“Ted Lasso”) and Tyler James Williams (“Abbott”) are holding it down in the primary acting races.

Oscar Isaac is carrying the torch for Latino representation in the acting categories for his powerhouse turn in HBO’s “Scenes from a Marriage.” But, unfortunately, he’s the only showcase in the main acting races after the snub of Selena Gomez from “Only Murders in the Building.” However, Afro-Latino Colman Domingo did snag a mention for guest actor drama for “Euphoria.”

Noteworthy, even though FX’s “What We Do in the Shadows” landed in the comedy series lineup for a second time, Indigenous People were looking to have a banner year with “Reservation Dogs,” and the possibility of Gil Birmingham cracking either of his lineups for “Yellowstone” and “Under the Banner of Heaven.” The Academy had other plans. In the entire history of the Emmy acting nominees, there’s only been one Indigenous person nominated – August Schellenberg for supporting actor in a miniseries or movie for “Bury My Heart at Wounded Knee” in 2007.

And let’s not overlook the lack of deaf actors (James Caverly was utterly worthy for “Only Murders”) or any disabled performers, which is still lacking in the Hollywood creative space.

Five of the seven nominees for directing (comedy) are women, including a shocking inclusion of Mary Lou Belli for BET+’s first nom for “The Ms. Pat Show.” This is the first time women have outnumbered men in any directing categories. While that’s not the same showing on the directing (drama) side, three of the seven spots are occupied by women, including two from “Succession” (Lorene Scafaria and Cathy Yan). The number of women in writing and directing categories is among, if not the most, in the 74-year history.

Although NBC’s “Saturday Night Live” extended its all-time nomination record, now sitting at 306 since its premiere in 1975, its nine nom tally, which includes only one guest acting mention for Jerrod Carmichael, is the lowest nomination haul since 2008 when it picked up six.

With “This Is Us” getting the shaft and only landing a single nom for original music and lyrics, it marks the second time in history that none of the broadcast networks have been included in the drama series lineup (the first was in 2020). With streaming dominating so aggressively, are we witnessing the end of broadcast (at least in the Emmy world)?

While HBO’s “Succession” broke the Emmy record for most acting nominations from a single series with 14, there could be such a thing as doing “too well” with the TV Academy. The same goes for its network counterpart, “The White Lotus,” which picked up eight of the 14 slots in the supporting limited categories. Five of the six remaining went to Hulu’s “Dopesick.” The outlier was (deservingly) Seth Rogen for “Pam & Tommy.”

This highlights an ever-growing problem with an oversaturated content market: there may be too much for the TV Academy membership to watch to make sound selections on their ballots. It looks like what’s the most-watched and not necessarily the most-loved.