Adam Sandler Brings Down the House With Hilarious Gotham Awards Acceptance Speech: ‘F— Every Other Comedian’ 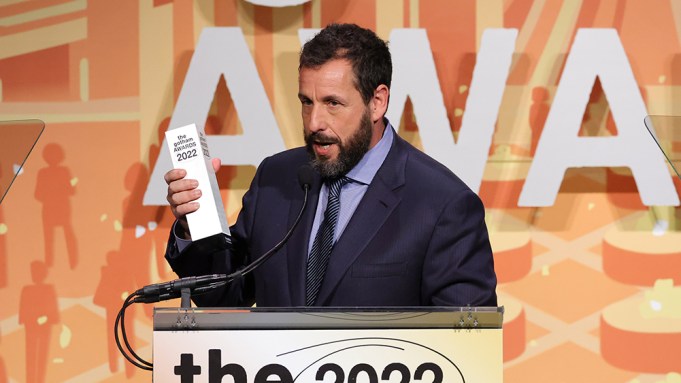 Adam Sandler lit up the 32nd annual Gotham Awards on Monday evening with his acceptance speech for the performer tribute award at the New York ceremony. The occasion marked Sandler’s first major stop of the awards season, campaigning for his performance in the Netflix basketball drama “Hustle.”

“I told my daughters Sadie and Sunny, who are 16 and 14, that I didn’t write a speech and they said phrases like, ‘Rude’ and ‘You’re mean,'” Sandler began. “Daddy’s fucking tired. Daddy works hard, calm down. They were like, ‘Can we write your speech, Daddy? So you got something to say.’ I said, absolutely.”

Sandler then pulled out the growly southern accent that he has often adopted for formal speeches: “Dear well-dressed dignitaries, highly educated hipsters and various other plus-ones of the Gotham Awards, thank you for giving our daddy, Mr. Adam Sandler, this prestigious lifetime, all-time, primetime G.O.A.T. achievement tribute award.”

The premise of Sandler’s daughters penning his acceptance speech, whether true or not, carried through the actor’s entire time on the stage, offering a self-deprecating peek behind the internal politics of the Sandler household.

“While daddy is with you tonight, we’re doing everything we’re not allowed to do when daddy is home, like eat his Yodels or try on his Spanx or, dare we say, laugh out loud at Ben Stiller movies,” he joked. “The last time daddy caught us chuckling away at the ‘Meet the Parents’ trilogy, he immediately stormed into the room he calls ‘The Screaming Room,’ which we just call ‘the shower,’ and bellowed out the phrase, ‘Only the Sandman makes people laugh. Fuck every other comedian.'”

Sandler’s “Uncut Gems” co-directors, Josh and Benny Safdie, offered a tribute speech to introduce their leading man to the stage. The trio have already announced that they are collaborating on a new film.

The “Hustle” star was one of two actors honored with a performer tribute at the event. Michelle Williams accepted her award, presented by her “Fabelmans” co-star Paul Dano, earlier in the evening. Other special distinctions through the evening included “The Woman King” director Gina Prince-Bythewood, Don Katz, Peter Kujawaski, Jason Cassidy and the cast of Hulu’s “Fire Island.”