The Oscars’ hour-long ceremony before the live telecast is getting some major star wattage.

I can exclusively reveal that Academy Award nominee Josh Brolin and “Aquaman” star Jason Momoa are in final talks to present all eight categories that have been cut from being shown in real-time during the Oscars telecast on ABC on March 27. The categories include original score, makeup and hairstyling, documentary short, film editing, production design, animated short, live action short and sound.

Highlights of the untelevised hour will be edited into the telecast. Momoa and Brolin, who both star in best picture nominee “Dune,” will also make appearances during the live show.

The Academy has been under fire for its decision to reformat the telecast. This year’s Oscar producer Will Packer defended the changes in a March 4 interview with Variety’s Clayton Davis. “I think it was the right decision,” Packer said. “We have to understand that the Academy Awards show as we know it is at an inflection point. The next coming years, especially this year, are going to be a harbinger for what this show will become.”

This year’s Oscars will be co-hosted by Wanda Sykes, Regina Hall and Amy Schumer. ABC will broadcast the Oscars live from the Dolby Theatre on March 27 starting at 5 p.m. PT.

Hall spoke about the pre-ceremony for the eight categories when I talked with her on March 11. She understands that the Academy is hoping to “keep the time of the show down.”

“There’s always, ‘The show is too long,’” she said. Hall added that she’s confident that Packer’s production will keep viewers “engaged” while also celebrating “all the creative parts of how a film comes together and the people who make that. Everyone watching will see those faces and be able to cheer on all those nominees and winners.”

Sounds like Celine Dion may be getting ready to release a new song! Sam Heughan tells me that the legendary singer has recorded a track for “Text for You,” the “Outlander” actor’s upcoming romantic drama with Priyanka Chopra Jonas. Dion appears as herself in the film. “I believe she’s written a new song for the movie,” he said when we chatted on an upcoming episode of the “Just for Variety” podcast.

A remake of the German hit “SMS für Dich,” the film follows a woman (Chopra Jonas) who grieves for her dead fiancé by sending romantic texts to his phone before finding out that the number has been reassigned to someone else (Heughan) and romance blossoms through Dion their love of Dion’s music.

Does Heughan get in on big-screen singing? “I can’t possibly say,” he teased.

“Succession” starts filming Season 4 in mid-June. “I wish I could tell you something, but I have no idea,” Sarah Snook, who plays Shiv, insisted to me at the AFI Awards Luncheon. What does she think should happen to Tom, now that he’s betrayed Shiv and her siblings by letting Logan know they’re planning to stop the sale of Waystar Royco? “Shiv wants Tom to be happy?” Snook said, laughing. “I don’t know!”

Snook flew in from the Australian bush, where she’s filming “Run Rabbit Run”: “My character goes through a mental breakdown, and I am covered in mud for a lot of the end of the film. No makeup, crying. It’s worlds apart from this right now and from Shiv.”

No word if Snook has returned to set yet because she tested positive for COVID-19 a couple of day after AFI.

Jason Segel, who starred on “How I Met Your Mother,” hasn’t watched the series revival — “How I Met Your Father” — yet. “I’m dying to,” he told me at the premiere of his Net- flix thriller “Windfall.” “I’m waiting so I can binge it all at the same time.” Then he cracked, “Ours went nine years, so I’ll watch it when they have all nine seasons.”

Courteney Cox gets pitched a lot of sitcoms, but she’s rarely impressed. “Usually they’re not challenging enough, or I find sitcoms just not that funny anymore,” she tells me on this week’s “JFV” podcast. “Shining Vale,” her new horror comedy on Starz, proved to be something different. She stars as a novelist who moves from NYC to Connecticut with her family to start over after her husband (Greg Kinnear) catches her having an affair. “I’m pretty sure this character was written for someone in their 40s … but then they changed it to a woman in their 50s, which is great because that’s when your midlife crisis really hap- pens,” Cox says. “That’s when menopause, the whole thing, that’s when they keep blaming it on ‘Oh, it’s hormones,’ but it’s a lot more than that, and you know, that’s what I am.” 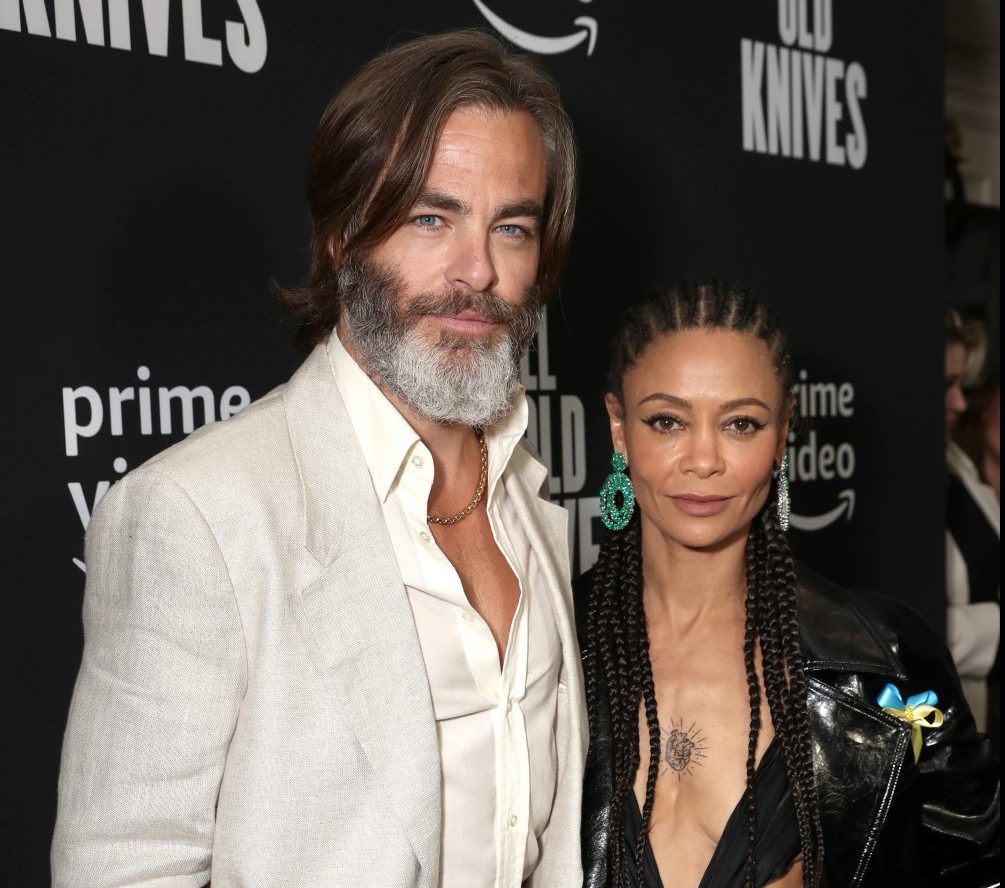 The chemistry between Chris Pine and Thandiwe Newton in their new CIA thriller “All the Old Knives” is scorching hot. Scenes of them in bed together are shown throughout the movie. “Like real people who are a bit shy, it took a little time, but we Zoomed from L.A. to London because we were in lockdown,” Newton told me at a screening of the Amazon film. “But it was his love of pencils that made me think, ‘You are incredible.’ He gave me these amazing, beautiful pencils. He’s an old-fashioned gentleman aesthete.” Newton gifted Pine with a suitcase from British luggage company Globe-Trotter. “They’re fucking sick. You can get like whole sets,” she said. “They gave me a 50% discount because I’m like, “You have like a lifelong purchaser now.’”

Tune In! The Queerties, which celebrates the best in LGBTQ entertainment and pop culture, will stream tonight on Revry and YouTube. See “Jeopardy” winner Amy Schneider snag the Bad Ass award and “Pose” star Michael Jaé Rodriguez honored with the Icon Award. The 10th annual festivities kick off at 6 p.m. PT.