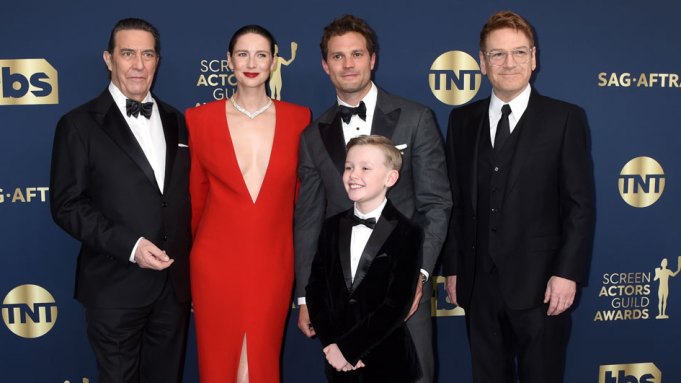 “Belfast” star Jude Hill is charming his way through award season one Spider-Man at a time.

In January, Hill, who made his feature film debut playing a younger version of writer-director Kenneth Branagh in the autobiographical movie, told Variety that one of the highlights of his time in Hollywood thus far was meeting “Spider-Man: No Way Home” star Tom Holland.

“‘Spider-Man: No Way Home’ was the first film that made me tear a bit. I cried four times during that film; it’s a work of art,” Hill shared, before recounting their chance meeting at a restaurant in Paris.

“As soon as [Holland] walked past us, I realized who he was,” he continued. “It’s that moment where you’re at a point where you can easily break … and he spoke a word to me, I broke. Even thinking about it now, it’s just wow.”

On Sunday night, Hill met yet another Spider-Man when he was introduced to fellow nominee Andrew Garfield on the silver carpet at the Screen Actors Guild awards.

“I was on the verge of tears,” Hill said shyly during an interview with his “Belfast” brood Caitríona Balfe, Jamie Dornan and Ciarán Hinds for Variety On the Carpet, presented by DIRECTV.

It was a heartwarming moment for the whole “Belfast” family, who’d assembled along with Branagh to celebrate the film’s ensemble cast nomination and Balfe’s nod for outstanding supporting actress. But despite the fact that Dornan and Garfield are longtime friends, he didn’t play a part in making this connection.

“I came over and you were already talking to him,” Dornan explained. “I thought, ‘Alright, maybe he’s moved on from me.’”

“It’s so funny because Andrew didn’t know who you were,” Balfe teased.

In fact, in was Hinds, who plays Hill’s grandfather on screen, that made the introduction, after having starred alongside the superhero in Martin Scorsese’s 2016 film “Silence.”

“Now we just have to get the third Spider-Man and then we’ve got the trifecta,” Balfe noted.

Gratefully, Hill has some time to make it happen, since “Belfast” is nominated for seven Oscars. Incidentally, the moment where the superhero trio meet up in “No Way Home” has been voted one of the top five cheer moments in cinematic history, a new prize awarded during this year’s ceremony. So the odds are looking good for Hill.