How ‘Puss in Boots: The Last Wish’ Found Inspiration in Anime Classic ‘Akira’ 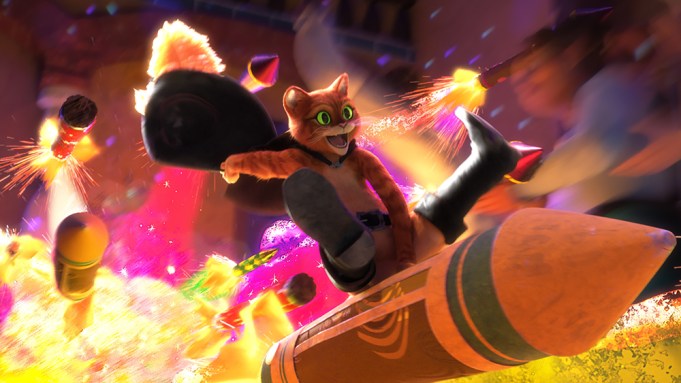 “Puss in Boots: The Last Wish” director Joel Crawford hopes audiences can “feel the imprint of anime” in his latest animated feature.

Speaking with Variety, Crawford said the animation team leaned heavily into the hand-drawn style for the beloved cat’s return. Set after the events of 2010’s “Shrek Forever After,” the film follows Puss as he learns that he’s burnt through eight of his nine lives and sets out on an epic journey to restore them.

“The fun was picking up and expanding the ‘Shrek’ universe, but also Puss’ world,” Crawford said. “It’s a fairytale idea that a cat has nine lives, but we thought, ‘How special would it be to focus on Puss and he has one life left?'”

The 1988 anime film “Akira,” in particular, served as inspiration. “I remember [as a young child seeing] the hand-drawn explosions and the whole thing felt so epic. It was beyond anything I’ve ever experienced, I was drawing dust clouds afterward and they were characters themselves,” he said. “It was fun to take on that inspiration and design the shape of the characters, but also the action of the world.”

Crawford says updates to mainstream CG animation have made it easier to embrace unique styles. The film seamlessly blends 2D and 3D animation, as well as different frame rates, to turn up the action moments in addition to pushing the boundaries of character animation. Crawford worked closely with head of character animation Ludovic Bouancheau to achieve that look.

The animators used a process called step animation for the action sequences, where certain frames were held longer to provide visual contrast. This can be seen in the opening minutes of the film, where Puss gets into a fight with a giant and there are “pushed poses” that not only make the visuals impressionistic, but give the audience a false sense of belief that all is right in Puss’ world.

“It made it feel fantastical, and the experience of it as an audience is you get to see these exaggerated movements and gestures during the action,” Crawford said.

But his main goal was to highlight the personal touch of hand-drawn animation that is found in traditional anime. “So much of art is the human touch, and that’s what was exciting,” he said. “We wanted to get back to the artist and reduce the imprint of the computer.”

“Puss in Boots: The Last Wish” premieres in theaters on Dec. 21.