Chanda Dancy’s Music for ‘Devotion’ Places Her in Awards Contention 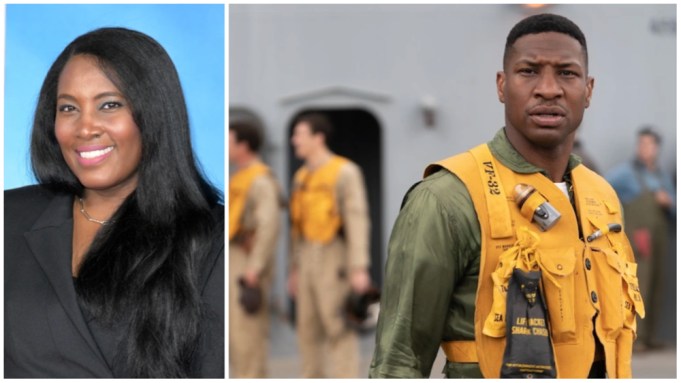 “Devotion,” says composer Chanda Dancy, “is about true eternal love. How do you translate love for family, love for your fellow man, love for your country, into music? That’s what the director and I wanted to create.”

Dancy’s score for the J.D. Dillard film about an African-American pilot who became a Korean War hero is among its biggest assets: a work for massive orchestra (and, briefly, choir) that underlines the thrill of flight, the dangers of war, and the close emotional ties forged between fellow airmen along with their families waiting back home.

It took 109 Nashville musicians eight days of recording to complete the score for “Devotion,” and if Academy voters recognize the accomplishment, Dancy could become the first Black woman to be nominated for best original score.

Dillard hired her more than two years ago, even before shooting began. The first theme she wrote (titled “Measure of a Man”) was based on a reading of the script — “it was a hymn to the idea of positive masculinity,” she says. “J.D. loved it. The action sequence, ‘Sortie,’ was the second big cue that was written, to the previs and dailies.

“To me, the best way to translate love to an audience is through themes, character themes, themes that take a journey,” she adds. So “Devotion” contains themes for Jesse (Jonathan Majors), for Jesse’s wife Daisy (Christina Jackson) and for his close friendship with fellow pilot Tom (Glen Powell).

Dancy’s score isn’t all heroics and fast-moving figures for hot-dogging pilots, however. Her classical training comes to the fore with sophisticated compositional techniques as in the music for the Battle of Chosin Reservoir sequences. There are moving moments for Jesse’s wife and the desperate rescue sequence that occupies the film’s final half-hour.

“We wanted something a little bit different,” Dancy reports, “and we needed the flexibility of being able to record different sections, and do orchestral sound effects.” The Ocean Way studios can only accommodate about 50 players per session, so she recorded strings and woodwinds separately, then brass, then percussion and finally choir.

She also wrote some of the fun big-band jazz heard behind some of the servicemen-on-leave scenes. “Those eight days in Nashville were, for lack of a better word, magic,” she says.

The Texas-born composer and violinist has been working toward this level of success for more than a decade. A graduate of USC’s scoring program and an alumnus of the Sundance Composers Lab, she has worked steadily in the indie world and written well-received concert works. Arts Boston named her one of “10 Contemporary Black Composers You Should Know.”

Then her score for Netflix’s “The Defeated” drew attention in 2020. “That was the proving ground,” she says. “I wrote four hours and 15 minutes of music in six weeks,” recording with an 85-piece orchestra in Prague.

Dancy has also supplied the dramatic score for the upcoming Whitney Houston biopic “I Wanna Dance With Somebody,” which opens Dec. 26.