‘Pachinko’s’ Main Title Design Was About ‘The Connection Between Family’ 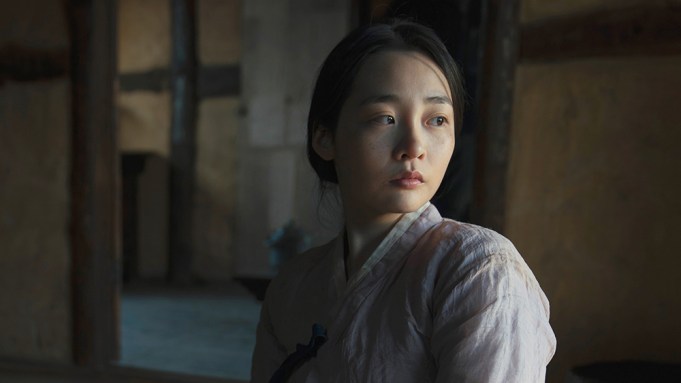 Depicting an ancestral journey was key for main title designers Angus Wall and Nadia Tzuo in developing the title sequence for Apple TV Plus’ series, “Pachinko,” a show that traces the fate of a Korean family and spans multiple countries, decades and generations.

At the heart of the journey is Solomon Baek, played by Jin Ha, a young employee at an international firm. He returns to his roots, reconnecting with his father Mozasu (Soji Arai), owner of a pachinko game parlor, and grandmother Sunja (Youn Yuh-jung), with a lens on the younger Sunja  (Minha Kim and Jeon Yuna), who leaves everything behind for a new life in Japan, a country that wants no part of her.

Based on Min Jin Lee’s rich novel, the show, which premieres March 25 on Apple TV Plus, has been adapted by series creator Soo Hugh, who scripted the title sequence into her drafts. The sequence is in two parts: a nostalgic look at family archives and portraits that transitions into a modern-day pachinko parlor with the characters dancing through it.

The creative brief for Tzuo and Wall was to lean in to the exuberance that connects both parts. They were careful not to make the first half of the sequence feel like a war documentary; instead, they focused on connecting emotions, whether it was a smile on the face of an old man, or a little girl.

“We put together archival footage to show how people lived, and the connection between family members,” says Tzuo. “Those are real family photos to show how they kept their lives going.”

Walls says of the pachinko dance parlor sequence: “Our first idea was how to visually connect the generations together.” Dance was a visual way of displaying joy, freedom, perseverance and emotion. It also gave audiences a taste of the different characters.

Hugh says she channeled her inner DJ for songs to represent each character: “For Yuna, I played ‘Moana’s’ ‘How Far I’ll Go.’ For Isak [Steve Sang-Hyun Noh] and Younger Sunja’s dance, I played Tupac’s ‘California Love.’”

The logo reveal at the end of the title sequence translates the word “pachinko” from Korean into Japanese and then English. “The logo represented the evolution of the immigrant family as they start off in Korea,” says Tzuo, “then passes to the second generation in Japan, and the youngest in New York.”