Continue to Variety SKIP AD
You will be redirected back to your article in seconds
Jun 27, 2022 2:39pm PT 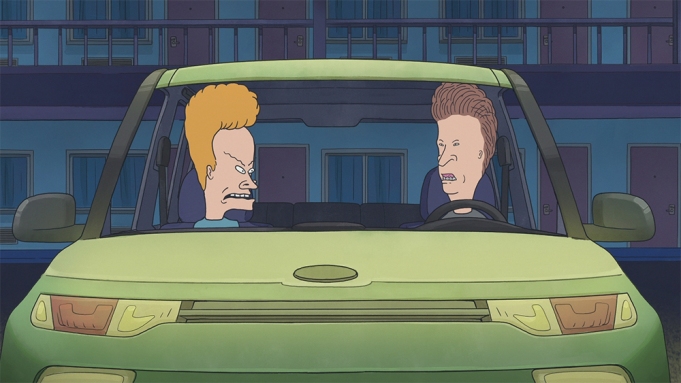 When director Mike Judge was working on “Beavis and Butt-Head Do the Universe” (now streaming on Paramount+), it was only fitting he call composer John Frizzell to work on the score. Judge needed the film’s music to reflect the emotional and physical journey the duo would embark on. To accomplish that, Frizzell recorded an epic score with a 69-piece orchestra in Vienna.

In the new film, Beavis and Butt-Head wind up at space camp through “creative sentencing” from a juvenile court judge in 1998. Mistaking a docking simulator for something else. Beavis and Butt-Head excel at it and are asked to join the space shuttle mission in a PR move. After ruining the mission, they are left for dead in space and end up going through a black hole and reemerging back on Earth in 2022, only to discover a very different world — and find themselves considered Buttholes of Interest by the NSA, the governor of Texas, and a highly intelligent version of themselves from a parallel universe.

Explained, Mike Judge, “I think there’s a mutual respect there that works. We like each other’s work, but also John has a combination of qualities that’s really rare to find — someone who is a truly great composer with a vast knowledge of that whole world, and then also really funny and understands where all the comedy comes from, and also writes really great memorable beautiful music. I find myself humming his cues all the time.”

Frizzell worked to deliver cues that ran the gamut from emotional to comedic. In all, he ended up with 60 minutes of music for the film using powerful low trombones and brass to accompany the cartoon duo on their new adventure.

While both films feature a large orchestra, the new film has a lot more music. The 1996 film has about 30 minutes of score and the new film has close to 60 minutes. The science-fiction aspect to the new film allowed me to really expand the intensity of the score, as dealing with time travel and parallel universes allowed for the music to be even more dynamic and expressive than the spy/action subject of the 1996 film. In particular, I wrote extensively for brass and was able to include a lot of powerful low trombones in addition to quite a few passages that feature trumpets. There is one, brief quote from the 1996 film in the opening credits where I used the ‘Butt-kong’ theme. The new score also features a love theme and quite a few theremin solos. My goal was to have practically no comedy in the new score. The only time I broke that rule was when the unicorn shows up.

You and Mike Judge have worked together on several projects over the years. How do the two of you collaborate?

Mike and I have a definite shorthand for working together. We still did a traditional spotting session. I usually throw out a few ideas about the mood I’m thinking of and if Mike really laughs, I know it’s on the right track, but most often I just have to dig in and write and see where it goes. This score took me about three months to write. Very little of that was revisiting or rewriting, most of the time was spent refining ideas and polishing the details and the orchestration. I had a lot of time to refine the score and that really helps it feel consistent and coherent.

Although the score doesn’t sound like a comedy score, it is meticulously timed to the picture hitting very precise moments. At the same time, I didn’t want it to feel so intentional and tightly synchronized. That was a difficult thing to achieve. Also, the score has a lot of variations in tempo with big accelerandos and rallentandos. I wanted the music to feel very fluid and natural as though there was no precise click, yet this had to be a sort of illusion as it needed to be frame-accurate. That took a lot of time. In terms of the pandemic, I think by the time we started I was pretty acclimated to zoom. I do very well in isolation so perhaps the lack of social contact worked to my advantage. I just go to the studio for long periods, and I completely lose track of time and just write and write and write.

How was your first experience scoring with the Vienna Film Orchestra? At the end of the process, how do you feel about this score and what makes it special?

Vienna was wonderful. We had a great deal of music to record and had to move very quickly. It required a first-rate team and near-perfect organization to pull it off. Nick Cimity on my team set the tone for this organization with his precision and perfectionism and the Vienna Film Orchestra team, including Bernd Mazaag our recording engineer, followed through. The sessions were precise but still very creative. Great organization and precision is required to have a creative and enjoyable recording session of this complexity. The Synchron team in Vienna nailed this and every player put their personal mastery of their instrument into this score.

I feel really good about this score. It is by far my favorite thing I have ever written and I‘m thrilled it is part of the world now. Beavis and Butt-Head have been a huge part of my life for a long time and I feel like they are practically family. I am very protective of them. Mike has given the world an incredible work of humor and satire and I’m really grateful to be a part of that. Most of all I really enjoy that we make people really laugh. The entire earth really needs a good laugh these days and the boys are back to help bring stupidity to a new out-of-this-world level.