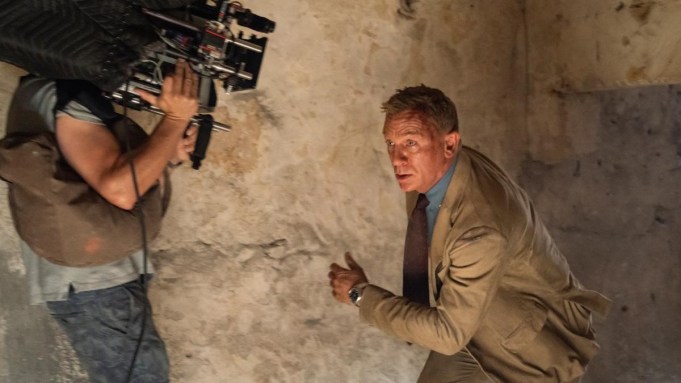 “No Time to Die” heralds Cary Joji Fukunaga’s turn at helming the 25th James Bond movie. Not only did Fukunaga shoot on film, he shot for IMAX.

Fukunaga picked his team of artisans to help keep the emotional arc of the storytelling front and center. Here he talks with Variety about the crafts of the film which dominated the BAFTA long list and Oscar-shortlists and could very well land a Best Picture nomination.

Why did you decide to shoot “No Time To Die” on film?

My DP Linus Sandgren and I will always, when we work together, fight to shoot on film.

These days, everyone is concerned about saving money and digital is one way do that. Ultimately, you spend a lot of time on digital trying to make it look good. But, the thing about [shooting on] film is that it captures something in a way that instantly hits that part of our brain that sucks us into the kind of magic of filmmaking.

What about working with your production designer, Mark Tildesley, who built sets at Pinewood Studios in London, and transformed some incredible locations for the film?

Mark built so many sets for this. He built that house we see in the opening scene in Pinewood on the 007 stage, but then he shipped it to Norway and constructed it on this frozen lake.

Similarly, Bond’s house was designed in the Stanley Kubrick building, and it was shipped to Jamaica where a local crew constructed it.

With [the practical location of] Matera, it’s an 8000-year-old city with a very specific color of stone. We built a necropolis across the valley. It was where Vesper’s grave was, and we had to match that exact stone. You see in the background, there’s the town of Matera and everything matches and feels as if it had always been there, but that cemetery didn’t exist a couple of weeks prior.

There’s even a really important Easter egg on that tomb Bond visits in Matera. Over Vesper’s grave — we never make a big deal of it, there’s no focus on it, but for anyone who goes back — two skeletons are holding up a banner carved in stone. It’s a Latin phrase that Mark and I had seen on the main basilica where the bridge is located. The phrase says, “What you are I once was, and what I am, he will become.” So, it was written in the beginning.

Let’s go back to Safin’s lair and the conversations you had with Mark about ideas and influences?

We went through three different iterations of that final lair. It’s set in a disputed island chain between Russia and Japan. That is a real bit of historical circumstances. Through that mythology, we created a space that could have had some Imperial Japanese history, Soviet history, and then Spectre history all layered on top of each other. Four years ago, I did a trip to Japan, after shooting “Maniac” and went to the Benesse Art Site. Naoshima Tadao Ando is a Japanese architect. You could say his work is brutalist. I think it’s more nuanced than that, especially with his use of curves and shapes and light. What I love is the slicing of light and where light comes in and how light bounces off walls. Mark and I both gravitated towards this dizzying maze-like structure, that Bond would have to infiltrate, particularly for that final sequence.

What about working with Billie Eilish and Finneas, having her write the Bond song that stays true to the essence of Bond. What was it like hearing her song, ‘No Time to Die’ for the first time?

I heard that song for the first time when we were shooting the trawler sinking sequence. We shot it late because Daniel had hurt his leg so we had to move that to the very end, and it was one of the last set pieces we were shooting. I’d been waiting six weeks to hear what Billie and Finneas would come up with. There’s always this thing where you work with people that you love what they have done, but they’re going to do something for you, and you just hope you love it as much as the other stuff they’ve done. I really sold Barbara Broccoli, the film’s producer on Billie and Finneas and how important they were to contemporary music.

Barbara had heard the song first, and she put her phone against her ear, and she played it for me. It was a rough demo, but I remember a distinct shiver going down my spine as I was hearing it. It was both brilliant and amazing. It’s a bold choice, but inside there’s a lot of Bond heritage and DNA to it. Finneas is also so well versed in music theory, and when you listen to the song, that melody is constructed in a very John Barry way with a lot of nods there to all the elements of classic Bond. So, it’s a throwback to the earlier style of Bond songs and music.

What was your approach to visual and special effects for this film?

When I first started making movies I tried to stay away from it entirely. As I’ve progressed through my projects, I have come to know the moments when we can do visual effects and have it be seamless because the last thing you want is for a sequence to feel like it’s coming from a different kind of film.

In a Bond film, where stunts are being done for real, where so much of it is tangible and on-screen, you’re much more vulnerable to VFX that somehow undermine that sense of reality that you’re trying to create. So you have to be much more, judicious in the use of it.

We were still able to use VFX to go even more places. The Faroe Islands doubled for the Sakhalin Peninsula and Pinewood doubled for Cuba. But hopefully, the audience is never jarred out of that seduction and suspension of disbelief that goes into movie magic.

What does it mean to see the crafts celebrated, especially on this film?

It’s always great to see the technicians and craftspeople on the film be recognized. I think that’s the best part of this time of year because a lot of attention is put on the more headline-heavy prizes, but these are the people who make the film every day and are so essential not only to the rhythm of the filmmaking but also to the quality of what is on screen.

In this clip here, “Precious Little Angel” there’s a face-off between Bond and Safin — what went into that scene from a craft angle?

There’s a bit of like movie magic happening there. Mark built a long arching set with a larger hallway and a smaller hallway, and for each of those hallways, we used about five times for five different sets which we reinterpreted. For Safin’s lair, that was the inner hallway of our hallway set. We changed the way that the component spaces were separated. In this case, we used the plastic you’d see hanging for oftentimes –in a meat locker. We had this interesting mix of furniture and artwork. Again, there are contrasting elements of cold wet concrete with the living room with this Monet in the background.

Having the little girl hiding there references the beginning of the film as well in terms of Madeline’s history with Safin. There’s also the emotional payoff of everyone sort of being reunited at the end of this scene.