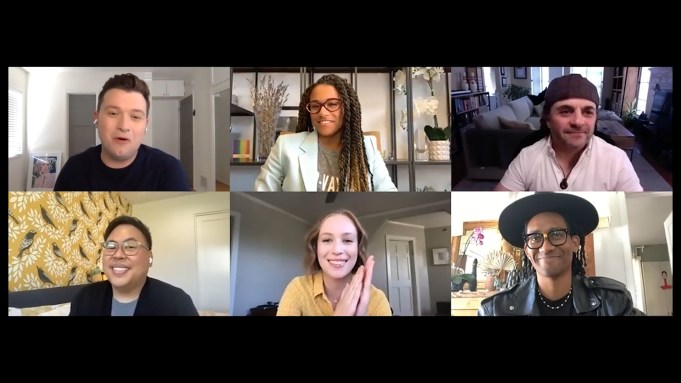 In Variety‘s Power of Pride Conversations presented by iHeart Media, two profound discussions touched upon the importance of LGBTQ+ representation in the media.

Santos, who just ended a six-season run as Mateo on NBC’s “Superstore,” said he appreciates that LGBTQ+ characters portrayed on television are no longer one-dimensional.

“All the characters that you’re seeing now, it’s not about their gayness,” Santos said. “When it serves the story, we lean on that. It’s not a crutch anymore like it used to be.”

After being on television for nearly 15 years, Matthews became a series regular for the first time on “The Flight Attendant.”

Cohen, a trans actor, thinks our culture is still confused about how reproduction relates to gender and sexuality.

“The only thing that is binary is reproduction,” Cohen said. “Sexuality and gender has a spectrum. People are starting to understand it a little bit, but we have so much more to go.”

Nevertheless, Cohen said he likes to view the situation as the glass half-full as he grew up without seeing any LGBTQ+ representation at all.

“I didn’t know that I existed, I really didn’t,” Cohen said. “I transitioned in a time when the only thing I had was this internal truth. Now it’s starting to change a bit.”

During the second panel discussion, Laverne Cox joined iHeartMedia CEO Conal Byrne in conversation about what pride means to her and her new podcast, “The Laverne Cox Show,” with Shonda Rhimes.

As a trauma survivor who has experienced PTSD, Cox opened up about her ongoing struggle with anxiety.

“Just the process of leaving my house sometimes is traumatizing,” Cox said. “Living in New York City most of my adult life, there was just always anxiety when I would leave my own apartment just because it’s a crazy city.”

Coming out of the COVID-19 pandemic and living at home for a year, Cox said it’s been an adjustment to go out again.

“I’ve never really liked crowds and I’m scared of having social anxiety,” Cox said. “I’m sure I’m not the only person experiencing that coming out of a global pandemic.”

However, Cox said she chooses to focus on the resilience and “the wonderful privilege” she gets to enjoy. As for the trans community as a whole, she is glad that there is more visibility — but that doesn’t come without its setbacks.

“Trans people have never been so visible and it’s a beautiful thing, it brings me such incredible joy,” Cox said. “But with more visibility, it means that there’s backlash and it means that we’re more targeted. We’re chin-deep in backlash right now.”

Cox believes that the safety of future trans children heavily depends on what lawmakers decide to vote on.

“I don’t have faith that they’re going to do the right thing, but I do have faith in our capacity as human beings to love each other. So let’s hope I’m right.”