‘WandaVision’ Episode 4: It’s All Wanda… Or Is It? (And More Burning Questions) 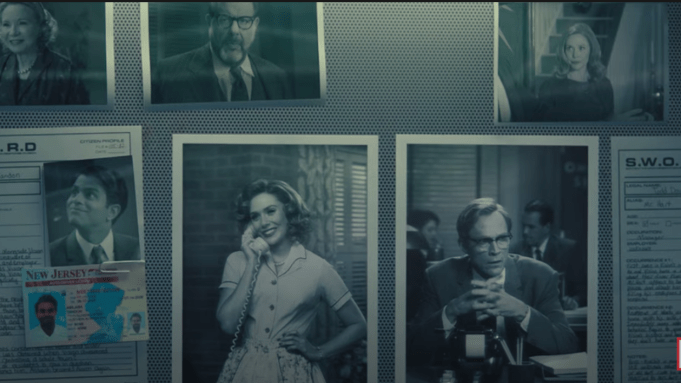 SPOILER ALERT: Do not read if you have not yet watched the fourth episode of Season 1 of Disney Plus’ “WandaVision.”

What started out as an excessively nostalgic homage to the genre of situational comedies starring two starcrossed Avengers — Wanda Maximoff (Elizabeth Olsen) and Vision (Paul Bettany) — is getting more sinister and precarious with each new episode drop. We may have been filled in on a couple of secrets in Episode 4, entitled “We Interrupt This Program,” but we’re still left with riddles to solve about the wacky, time-hopping world of “WandaVision.”

Well, as Dr. Darcy Lewis (Kat Dennings) would say, let’s get this show on the road! Here are nine burning questions from Episode 4 (and a few that remain unanswered from our past three recaps):

Can we trust Acting Director Tyler Hayward (and did he change S.W.O.R.D’s name)?

We barely know anything about S.W.O.R.D’s Acting Director Tyler Hayward (Josh Stamberg). Off the bat, he seems nice and suave enough, but if there’s one thing the Marvel Cinematic Universe has taught us time and time again, it’s that government organizations are never to be fully trusted.

There are a couple of things about Hayward’s involvement in S.W.O.R.D that the episode does reveal, though. The first being that S.W.O.R.D’s name was changed from Sentient World Observation Response Division (the organization’s canonical name in the comics) to Sentient Weapon Observation Response Division. Words matter, and changing “world” to “weapon” is a huge indicator of what aliens and other cosmic beings foreign to Earth are being treated as by Hayward and company: threats, not allies.

Hayward also “grounds” Monica (Teyonah Parris), although he does claim that the “terrestrial punishment” comes from her mother, and not from him. If the directive did come from Hayward and it turns out that he was lying, that could mean that he’s power-hungry and intimidated by the future Captain Marvel.

How long has the Westview hexagonal bubble been in existence?

In both subtle and not-so-subtle ways, “WandaVision” episodes have showed us that time is clearly not going at a normal pace in the Westview radioactive reality-warp dome. One minute Wanda is pulling off a master deception at a neighborhood magic show “for the children,” and the next she’s about to give birth to children, all in the span of maybe 72 hours.

When “WandaVision” starts for its audience, real-life Disney Plus subscribers, the story begins on August 23rd. But, when did “WandaVision” start for its fictitious cast, the supposed innocent victims of Wanda’s sitcom fantasy? The only indicator of a true passage of time in the episode is that Monica awakens after “The Blip,” three weeks later pushes through the trauma and heads into the office, and sometime soon after that gets a little too close to the hexagonal bubble’s invisible fencing. (Whoops!)

We aren’t given any sign of when the missing person case in New Jersey came to the attention of S.W.O.R.D., nor when it was filed in the first place (or how, if none of the residents of the non-manipulated Westview even remember or acknowledge the existence of their town).

What will those high levels of “CMBR” cause when they aren’t safely contained?

This might simultaneously be the biggest burning question of all and the one that we, so far, know the least about. When Darcy’s (Kat Dennings) checking out the energy being emitted from Westview’s perimeter, she certifies that there is a “colossal amount” of cosmic microwave background radiation aka CMBR flowing through the world of “WandaVision.” While an agent attests that the electromagnetic radiation is within a safe limit, Darcy warns that it won’t always stay in that manageable state.

CMBR is relic radiation that dates back to the Big Bang— the very same celestial phenomenon that caused six extremely potent elemental crystals (space, reality, power, soul, mind and time) to be formed in the MCU.

This could mean that Wanda, or somebody inside of the bubble, has one or multiple infinity stones at their disposal, and that’s how this altered reality has been sustained for as long as it has.  Additionally, these high levels of radiation in “WandaVision” could be causing potentially irreversible damage to the enslaved cast members — and maybe even superpowered mutations — though Darcy and crew didn’t seem terribly concerned by that possibility. We’ll keep an eye out for CMBR’s cause and effect down the line.

What are the real identities of Agnes, Dottie, and Ralph?

Ever since the first official trailer for WandaVision dropped back in September, fans have been hypothesizing that nosy neighbor Agnes (Kathryn Hahn) is actually a cloaked Agatha Harkness. Both the trailer and the episodes have dropped hints, namely, in Agnes’s costuming and accessories — a rabbit potentially named after her comic-book son, Puritan-era loafers with silver buckles, an Ozian bicycle, a broach that looks an awful lot like Agatha’s signature choker, flask (for potions, duh), 80s leggings in the magenta and ultraviolet hues that Agatha’s garb is commonly shaded in the comics, and most revealing: a Halloween costume of a witch.

Episode 4 gives off yet another very strong hint that Agnes = Agatha by showing a board with the identifications of every resident of Westview that was sucked into the kitschy parallel universe, save for a couple of telling exclusions.

Agnes has no New Jersey ID card. Also missing from the board are her husband, Ralph, whom she has mentioned more than once but has never appeared on-camera. Could this be a case of the “oh, my boyfriend lives in Canada” trope (Ralph is real but is never shown, so characters suspect he’s made-up), or will Ralph be a surprise villain? Fans have speculated that Ralph could be the Grim Reaper, a member of Ultron’s Lethal Legion supervillain team and one of Vision’s main enemies in the comics. Shrug. We’ll have to stick around for more episodes to figure out that mystery.

Another mystery is the identity of Dottie (Emma Caulfield). While Darcy and Jimmy (Randall Park) are viewing the scene in which Dottie becomes suddenly hostile toward Wanda at the swim club, voices her suspicions of the unusual couple’s appearance in Westview, and ends up with broken glass slicing her hands, Jimmy asks whether Dottie is “a real person” or not. Darcy offers no response. This could point to S.W.O.R.D. maybe being in on the fact that some characters in “WandaVision” aren’t original Westview residents, but other types of people. Whether they are victims or villains of the show-within-a-show remains unknown.

Given Monica’s fall-down-the-rabbit-hole into the “WandaVision” zone — and her rejection — it seems unlikely that Jimmy or Darcy would take it upon themselves to willingly get stuck in the meta series, but who knows? Both Park (“Fresh Off the Boat”) and Dennings (“2 Broke Girls”) have ample sitcom experience, so we’re hoping for our sakes as viewers that they do get WandaVision-fied.

Do the fake ads mean anything?

We’ve asked this question in almost every episode recap thus far, and we still don’t have a clear answer. While Episode 4 didn’t get a new fake ad, we did witness a snippet of the Strücker watch commercial screened on Darcy’s itty bitty retro TV set. She didn’t seem to pay the spot much mind. However, given the brand names of the products advertised and the nature of the products themselves, subliminal messaging and foreshadowing still aren’t off the table.

In conclusion: don’t skip the commercials.

Will Vision be resurrected?

Maybe the more pressing question to ask here is, will we ever be able to get the haunting image of Vision’s cold, lifeless eyes and crushed cybernetic skull out of our heads? The Synthezoid, as Darcy points out in the latest episode, wasn’t “blipped” when Thanos (Josh Brolin) snapped his greedy, grubby, genocidal fingers at the end of “Avengers: Infinity War.” His wiry brains were squished to death by the purple Titanian and the yellow Mind Stone was subsequently extracted, placed into that brass Infinity Stones knuckles thing, and well, you know the rest.

Vision may be alive-ish in “WandaVision,” but his physical and mental state are both now, at least from what we can tell, under Wanda’s influence. Episode 4 proposes that Vision is powered-on in Westview 2.0, and is perpetually in a state of aliveness and delusion, so long as none of the characters in “WandaVision” divert from their given roles and scripts. As soon as Monica broke the fourth wall and brought up Ultron and Pietro, Wanda’s handle on her narrative slipped, and Vision, to our collective horror, is zombified on-screen, before he’s rebooted again.

Whether or not Vision will be resurrected (for real) after or during the events of “WandaVision” is unclear, but the MCU is no stranger to resurrections. But, the MCU is also not a stranger to “reviving” beloved characters via Skrull transformations — Nick Fury (Samuel L. Jackson) in the end credits of “Spider-Man: Far From Home” turns out to be an extraterrestrial shapeshifter in disguise. It may be a stretch, but anything seems to go in “WandaVision.”

How much of this show-within-a-show is under Wanda’s control?

By the end of the fourth episode, we’re led to believe that Wanda has been behind the decade-jumping telecast the whole time. There have been a lot of clues throughout the show that could be supporting evidence for Wanda being the mastermind behind it all (the strongest being that she pushes Monica out of the radioactive bubble), but these clues shouldn’t be taken at face value. After all, this is a mystery series that has five episodes left; a series that may directly tie into “Doctor Strange and the Multiverse of Madness”; and a series that may introduce villains that have either infiltrated, created, or preserved the world of “WandaVision.”

This episode also suggests that Wanda knows that her (?) sitcom is being watched by outside forces, as she has purposefully omitted footage of “WandaVision” from S.W.O.R.D.’s prying eyes, censoring scenes like Dottie’s injury from viewers like Darcy. And yet, it could also be Agatha, or Mephisto, or the Grim Reaper, or whatever enemy that is, to answer Jimmy’s repeated question, “doing this” to Wanda.

So… are Wanda’s twins actually real?

While catching up on her new favorite radiated sitcom, Darcy’s eyes tear up watching Wanda give birth to her fast-tracked, fruit-sized fetuses Billy and Tommy Maximoff. She then exclaims to Jimmy, “Twins… what a twist!”

What a twist indeed. Last week, our recap asked this very question and posed two theories about the brothers based on the Marvel comics. One posits that the boys may, unbeknownst to Wanda, be figments of her imagination (her eventual discovery of the truth is provoked by Agatha Harkness, which furthers our suspicion that the sorceress may be Agnes all along). The other theory suggests that Billy and Tommy — who eventually become the Young Avengers Wiccan and Speed and are basically a mini Scarlet Witch and Quicksilver (Pietro Maximoff) in terms of superpowered abilities — were created from the demon shards of Mephisto (which also furthers our suspicion that either Dottie or Ralph are the WandaVision-ified versions of His Satanic Majesty).

We still don’t know if Wanda’s twins are actually real, but the “demon shards” theory does provide more IP fodder for Marvel Studios to play with, opening up the possibility of bringing in a bunch of characters from the comics into the MCU (which could include — oh my God — Nicolas Cage’s “Ghost Rider”).

Well, that’s a wrap, folks. While a couple of the show’s mysteries were revealed in Episode 4, some just got even more convoluted. Guess we’ll find out more next week when “WandaVision” channels the 1980s.