‘WandaVision’ Finale: The Fate of Agatha, Monica and the Twins, and Other Burning Questions 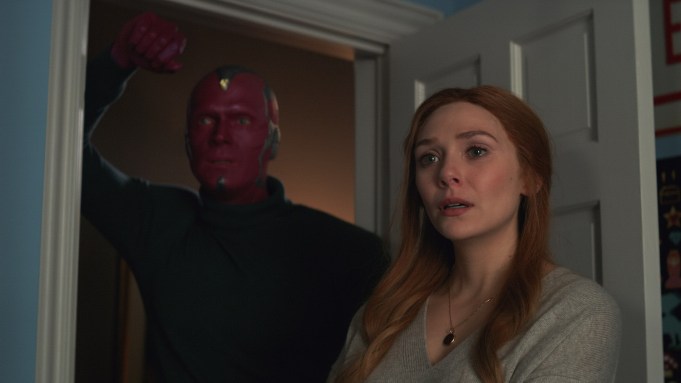 SPOILER ALERT: Do not read if you have not yet watched Season 1, Episode 9 of Disney Plus’ “WandaVision.”

In the series finale of “WandaVision” — or, at least, “The Series Finale,” as the ninth episode of Marvel Studios’ first TV show was titled — we watched Wanda Maximoff (Elizabeth Olsen) finally come into her own as the Scarlet Witch, and come to terms with her grief over the death of Vision (Paul Bettany).

For one, as Vision and Wanda said as the Hex collapsed around them, they have said goodbye to each other before, so it stands to reason they will say hello again. For another, the “conditional” Vision (that Wanda created within the Hex) helped the “true,” ghostly Vision (that S.W.O.R.D. resurrected as a sentient weapon) to reclaim his memories. So Vision isn’t exactly dead after all.

“The Series Finale” certainly did bring the story of Wanda’s grief to a close with an action-packed climactic episode that ended with a moment of deep tenderness and love. But like any story within the Marvel Cinematic Universe, it also left some major things unresolved — and proffered a few tantalizing new questions for what’s to come.

Before we dive into all of that, however, it’s worth pointing out what “The Series Finale” did not do. It did not introduce any new major characters, or showcase a mind-melting surprise star cameo, or affirmatively establish a new Big Bad beyond Agatha Harkness (Kathryn Hahn). There was no tearing of the multiverse; for now, the X-Men remain firmly outside the MCU. The Sorcerer Supreme got a name check — it seems Wanda’s stronger than him — but Benedict Cumberbatch did not appear as Doctor Strange. Brie Larson didn’t fly in as Captain Marvel, either. Virtually all of the biggest fan theories about “WandaVision” came to naught, for the simple reason that many of those theories ultimately had very little to do with what was actually happening in “WandaVision.”

At its core, this was a show about how one woman dealt with almost insurmountable loss — of her parents, her brother, and her soulmate — and how Wanda’s grief not only warped reality to spectacular effect but reverberated into the lives of virtually everyone around her, often painfully and at great cost. It was not, however, a show about the devil, or about a sorcerer in New York, or about Patrick Stewart, Ian McKellan or Michael Fassbender showing up at the last minute as a character who meant nothing to anyone on the show. Nor did it ever really suggest it would be.

In today’s hyper pop-culture literate landscape, any show that draws from a wealth of source material like this one risks its fans using their knowledge of that material to get precariously far ahead of the story that’s being told. It can be great fun to play what if, but, to paraphrase Vanity Fair’s Joanna Robinson, speculation with expectation is just a recipe for disappointment.

That is especially silly with a show as exceptional and resonant as “WandaVision” has been these past nine weeks. So enough carping about what it didn’t do. Let’s dive into what it did.

When will we see Agatha again?

After a knock-down, drag out fight that ended with Wanda using Agatha’s protection runes against her, Agatha certainly seemed defeated. But she didn’t exactly lose, either. She succeeded in getting Wanda to recognize her position as the Scarlet Witch and to confront the enormous pain she’d caused the “meat puppets” living in Westview. And Wanda didn’t kill her, either; just condemned her to live a quiet life trapped within the role of the nosy neighbor Agnes.

In the comics, Agatha has served as Wanda’s mentor in magic, and the finale still left that door cracked open. “You have no idea what you’ve unleashed,” Agatha tells Wanda. “You’re gonna need me.” Wanda seems to agree, telling Agatha, “If I do, I know where to find you.”

This could mean Hahn’s going to appear alongside Olsen in “Doctor Strange in the Multiverse of Madness.” More likely, though, Agatha’s fate in the MCU is a big TBD. Maybe she’ll star in her own spin-off “Hark! A Witch!” Or maybe “WandaVision” 2.0 will be a buddy comedy with Wanda and Agatha as begrudging partners in magic. Time will tell.

When will we see Vision again?

As previously mentioned, hours before Hex Vision disappeared, he zapped Ghost Vision’s memories back into focus, after which Ghost Vision zoomed away to points unknown. In the comics, Ghost Vision eventually gets back his emotions and becomes more or less his old self. But it would feel lamer than lame — and not really the MCU’s style — for Vision 2.0 to become exactly like his predecessor as if nothing had happened.

Whatever his fate, Ghost Vision is out in the world, so when he will show up again in the MCU? Well, he could swoop into “Doctor Strange in the Multiverse of Madness,” but that movie’s focus on magic wouldn’t leave a lot of room for a synthezoid still sorting through his personal hard drive. Vision has sometimes connected up with Hank Pym in the comics, which would suggest Vision’s return in 2022’s “Ant-Man and the Wasp: Quantumania.” There’s always the possibility of a second season of “WandaVision” — or whatever different incarnation of the show is percolating inside Kevin Feige’s brain. And then there’s the “Fantastic Four” movie looming on the horizon. Your guess here is as good as mine!

When will we see Monica again?

This one’s easy: Monica Rambeau (Teyonah Parris) will next appear in “Captain Marvel 2,” currently set to debut in Nov. 2022 with director Nia DaCosta. The mid-credits teaser in “The Series Finale” even strongly suggested that we’ll next see Monica in space, as her superpowers come further into focus.

The appearance of a shapeshifting Skrull in an F.B.I. uniform, by the way, also teases a different upcoming Marvel Studios title: “Secret Invasion,” the Disney Plus series about a faction of Skrulls who infiltrate all manner of positions of power on Earth. Who else could be a Skrull hiding in plain sight?

When will we see Ralph Bohner (Evan Peters) again?

I’m going to go out on a limb here: We won’t. The necklace Agatha used to enchant her poor, unseen “husband” Ralph was hiding in plain sight the whole time — it’s some kind of commentary on men’s fashion that the same necklace didn’t look out of place on Fietro in the ’80s, ’90s, or 2000s. One might quibble and ask how Agatha bestowed super speed on a mortal man, but, again, we’re dealing with magic here, so anything’s really possible.

Granted, Agatha’s inevitable return could also mean we see Ralph again, but somehow I doubt it. The bigger question is whether casting Peters as Fietro/Ralph was worth sparking a tsunami of speculation that he was playing his character from the “X-Men” movies — speculation that could only lead to the letdown of learning Peters was really playing some random dude with a punny last name. On the other hand, it was thrilling to see Peters standing at Wanda’s doorstep, and making Wanda think her brother had returned was totally in keeping with the show’s exploration of how grief can make us yearn for the impossible.

Put it this way: Does casting Peters as someone who isn’t from the multiverse also establish that no one else is going to pop up as their character from Fox’s “X-Men” movies? And wouldn’t that mean once and for all that when the X-Men do come to the MCU, they will be played by a brand new cast?

What is the Darkhold, and what does it portend?

One major new element to the MCU was formally introduced in “The Series Finale”: The Darkhold, what Agatha called “the book of the damned.”

The noise you’re hearing is the sound of fans of “Agents of S.H.I.E.L.D.” and “Runaways” grinding their teeth at the suggestion in “WandaVision” that the Darkhold has been in Agatha’s possession since at least the late 1600s. That’s because these two Marvel shows — not produced by Marvel Studios but ostensibly within the MCU — have already showcased the Darkhold quite extensively. So let’s just acknowledge here that this storytelling discrepancy can probably be chalked up to some kind of temporal hiccup caused by all the time travel in “Avengers: Endgame,” and agree to argue about it on Twitter and Reddit another day. For now, let’s get back to our regularly scheduled recap.

Agatha uses the Darkhold to explain to Wanda that the Scarlet Witch is unique among witches, in that she is “forged” rather than born (like Wanda was with the Mind Stone), she has no coven (though one might wonder if the Avengers was her coven), and she can do magic without any need for incantation (duh). But “WandaVision” also strongly suggests that Agatha’s powers — like, say, living for over 300 years — come direct from her use of the Darkhold.

In the final post-credits scene, we see Wanda in a remote wooden cabin, having split her astral body from her physical form in order to read the Darkhold and learn more about her abilities. Between a magical book stuffed with ill portent, Wanda’s astral projection, and Agatha’s statement that according to the Darkhold, Wanda’s “destiny is to destroy the world,” it would seem Marvel’s already concocted a potent storytelling brew for Wanda’s next appearance in “Doctor Strange 2.”

First, though, it would seem Wanda’s children aren’t quite as impermanent as we’ve been led to believe…

When will we see Billy and Tommy again?

When Wanda first tries to lift the Hex, she witnesses Vision, Billy (Julian Hilliard) and Tommy (Jett Klyne) all begin to disintegrate; when the Hex collapses for good, we’re meant to believe Wanda’s family went with it.

But in the post-credits teaser, when she’s reading the Darkhold, Wanda begins to hear Billy and Tommy cry out for help. In the comics, Wanda’s twins are built using pieces of the soul of the Marvel Big Bad known as Mephisto. There’s nothing in “WandaVision” to indicate that’s what happened on the show, but if Billy and Tommy are ever going to become the superheroes Wiccan and Speed as so many fans now expect them to, they’ve gotta come back from somewhere, so why not pulled out from the devil himself?

Actually, there’s still a lot that’s unclear about these kids. Why couldn’t Wanda’s magic work on them as babies to put them to sleep? How did they age up so quickly? What did Wanda mean when she thanked them “for choosing me to be your mom”?

Hopefully, in due time, Marvel will answer all these questions. And in doing so, raise even more questions that will keep us coming back for more.