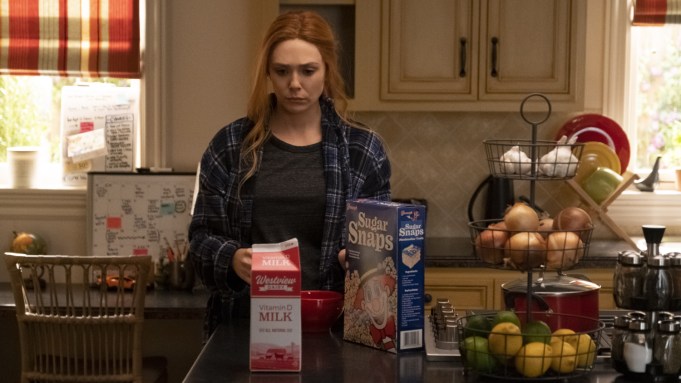 SPOILER ALERT: Do not read if you have not yet watched Season 1, Episode 7 of Disney Plus’ “WandaVision.”

Despite the best speculative musings of the internet, Reed Richards (a.k.a. Mr. Fantastic) did not show up on the latest episode of “WandaVision,” and it seems pretty likely now that he never will. In truth, the friend Monica was going to see was just some random S.W.O.R.D. buddy named Major Goodner (Rachael Thompson) — a character with no obvious connection or resonance within the Marvel comics.

But no matter. The third-to-last installment of Marvel Studios’ wild and wacky TV adventure still managed to deliver not one, but two highly anticipated plot turns: the transformation of Monica Rambeau (Teyonah Parris) into the superpowered Photon, and the revelation that nosy neighbor Agnes (Kathryn Hahn) is really the powerful witch Agatha Harkness.

In the immortal words of Doctor Strange, it does appear we are in the endgame now for “WandaVision.” In fact, Monica’s debut as Photon and Agnes’ coming out as Agatha were so monumental that the rest of “Breaking the Fourth Wall” felt a bit like filler, with Vision (Paul Bettany) and Darcy (Kat Dennings) spending the episode running around a literal circus and then trying in vain to get back to Wanda (Elizabeth Olsen). At least Darcy filled Vision in on what’s happened to him — and, by proxy, reminded us that in the world of “WandaVision” the events of “Avengers: Infinity War” and “Avengers: Endgame” were mere weeks earlier from Wanda’s point of view.

Darcy did, however, ponder a few pressing questions about Vision, so we might as well start our survey of this week’s “WandaVision” imponderables with them…

What is going on with Vision, exactly, and what does Hayward plan to do with him?

Of all the questions Vision threw at Darcy — are my kids safe? what’s the deal with fake-Pietro? — the one that resonated the most was also the simplest: “What am I now?”

Darcy presumed that Wanda’s powers just kind of switched Vision back on, but when he attempted to leave the Hex, his body disintegrated — suggesting that his resurrection is dependent on Wanda’s magic. (If it is, indeed, Wanda’s magic.) Then again, unlike the rest of the citizens of Westview (save for Agatha and possibly fake-Pietro), Vision retains his consciousness and free will, if not his memories. So whether the mind control in Westview is Wanda’s doing or Agatha’s, there’s something about Vision’s physiology that sets him apart. Wanda even says to her boys about their father, “If he doesn’t want to be here, there’s nothing I can do about it.”

Perhaps it’s that uncanny quality that Hayward is after with Project Cataract and S.W.O.R.D.’s efforts to bring Vision back online. At the very least, his efforts to conceal the project, matched with his curiously detailed understanding of the goings-on inside Westview prior to Wanda’s rapid expansion, make it pretty clear that Hayward’s plans aren’t all that great.

We still don’t know, however, what drove Wanda to take Vision from S.W.O.R.D., how she knew he was there, and why she set up her sitcom idyll with him in precisely the same town where Agatha Harkness keeps her magical dungeon. For that matter, why does Hayward seem to have more information about that town than he wanted to share with Monica? Could Agatha and Hayward somehow be working together to resurrect Vision in a mutually beneficial arrangement?

OK, probably not. But Hayward is definitely up to something.

Why is Westview beginning to fall apart, and why can’t Wanda stop it?

From Billy and Tommy’s video game controllers reverting to Atari controllers and then to UNO cards, to Wanda’s bottle of almond milk reverting to a black-and-white glass jar of cow’s milk, life in Westview is starting to lose its cohesion. More subtle, Wanda has completely dropped the convention that she’s living inside the show, and acknowledging straight-away that it’s a false reality of her making. I would say that’s in keeping with the episode’s “Modern Family”/”The Office” format — and the fourth-wall breaking of the episode’s title — but we also learned that the “WandaVision” TV show itself has stopped “airing” beyond the Hex.

The most obvious reason that the sitcom reality is slipping is that when Wanda expanded the Hex, she overextended her abilities, causing some details to slip through the cracks. What’s even more distressing for Wanda is that she can’t seem to fix it — things are slipping out of her control. When she confesses those feelings in her interview segment, however, a voice on the other end of the camera asks, “Do you think maybe this is what you deserve?”

By the end of the episode, we learn the voice is Agatha’s, which leads me to conclude that Westview’s lack of cohesion is somehow her doing, not Wanda’s. So…

What does Agatha want with Wanda? And what’s going on in that basement?

Remember in Episode 5, when Agnes/Agatha was agog at the suggestion that Wanda could bring back the dead? I think that was genuine. Agatha tells Billy and Tommy that Wanda “can do anything,” and whether that’s really true, I think Agatha believes it. Last week’s claymation ad for Yo-Magic yogurt laid out the stakes here pretty starkly: Agatha wants Wanda’s magic, so she’s helped to facilitate a reality that gives Wanda what she thinks she wants, a life and family with Vision, but really traps her within her own grief. The longer she’s in that state, the weaker her defenses, allowing Agatha to syphon off more of Wanda’s powers. And now that she things Wanda is at her weakest, she’s zapped away Billy and Tommy, too. (Or not: The whole Mephisto thing is still lingering…more on it in a moment.)

The fabulous “Agatha All Along” credit sequence at the end also reveals that Agatha’s been the one manipulating the minds of at least some (and I would submit, all) of Westview’s residents. Which leads me to wonder how long Agatha’s been living in Westview (in the comics, she’s as old as human civilization), and whether the Hex predates Wanda and Vision’s arrival there.

One thing is certain: The eerie, glowing book Wanda saw in Agatha’s basement holds some major significance — and gives of some serious “Doctor Strange” vibes, no?

Who is Pietro, really?

Wanda was clear with her twins at the outset: Whoever Evan Peters’ Pietro is, he is not her brother. Peters was absent from most of the episode save for the (first!) post-credits sequence when he snuck up on Monica.

Signs are increasingly pointing to Peter’s Pietro being Mephisto, the devilish big bad who, in the comics, provided the raw materials for Billy and Tommy from his soul — only to absorb them back into his being, causing Wanda to go insane. It definitely looked like Peters’ Pietro was the person picnicking with Agatha outside Wanda and Vision’s house, before Agatha sent him to their doorstep.

But I don’t know. This episode also set up a clear power triangle, with Agatha and Monica battling over whether Wanda breaks bad or good. Throwing in Mephisto seems like overkill at this point. Like Thanos in the Infinity Saga, he could very well be a looming presence, perhaps the ultimate master behind Agatha’s shenanigans — someone hinted at who will make their formal debut in a later Marvel project.

Instead, I still think Peters’ Pietro really is his character from the “X-Men” movies, plucked from the multiverse by Agatha as a proxy for Wanda’s brother because, in truth, dead is dead and there was no bringing the Aaron Taylor-Johnson Pietro back to life.

Whoever this guy is, we know from the post-credit sequence that he is about to tussle with Monica. I don’t like his odds

When will Monica fully come into her powers?

Even more than Agatha’s big reveal, the most thrilling part of this episode for me was watching Monica propel her way through the barrier and, through its DNA-warping powers combined with Monica’s sheer force of will, transform herself into a superhero. In the comics, Monica becomes Photon; her eyes glow blue, she can fly, throw energy blasts, change her appearance including become invisible, and see the far more of the natural forces around her.

It would be jarring for Monica and “WandaVision” if she were to suddenly be in command of all of these abilities right away. But it’s obvious she’s going to need at least some of them if she’s going to be able to stand up to Agatha — and, possibly, Wanda. Will not-Pietro be there to help her? Or is he going to be her first test? We’ll have to wait to find out!