‘The Falcon and the Winter Soldier’ Episode 3: The Curious Return of Sharon Carter and Other Burning Questions 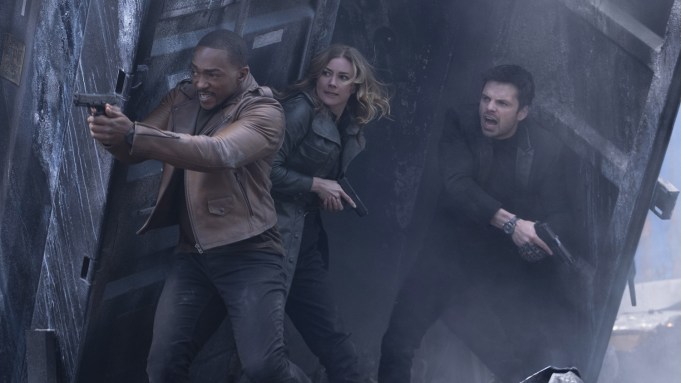 SPOILER WARNING: Do not read if you have not seen Season 1, Episode 3 of Disney Plus’ “The Falcon and the Winter Soldier.”

The topsy-turvy world created by the Blip gets even more complicated in “Power Broker,” an episode that introduces a brand new location and several new rogues to the Marvel Cinematic Universe (well, for a while, anyway). Bucky (Sebastian Stan) helps Zemo (Daniel Brühl) break out of prison. John Walker (Wyatt Russell) continues to demonstrate how ill-suited he is to the title of Captain America, while Sam (Anthony Mackie) becomes so disillusioned with the whole idea of a super soldier that he wishes he’d destroyed Cap’s shield outright.

Most importantly, we are re-introduced to Sharon Carter (Emily VanCamp), and learn that getting forced to go off the grid because she helped Steve Rogers in “Captain America: Civil War” has dulled the clarity of Sharon’s moral compass.

We’re halfway though “The Falcon and the Winter Soldier,” and we still have questions left to answer. So let’s get to them!

After Bucky breaks Zemo out of jail so they can use his knowledge of Hydra to chase down the Power Broker, Zemo — who, it turns out, is an extravagantly wealthy baron — takes them in his private jet to Madripoor, an island nation that historically was a sanctuary for pirates and has become a lawless haven for all manner of malefactors.

Why haven’t we heard about Madripoor before? Well, the location was first introduced in X-Men comics in the 1980s, which means that until 2019, the film and TV rights to Madripoor were the intellectual property of 20th Century Fox. Now that the X-Men comics are back under the Marvel Comics fold, the MCU can take full advantage of its own Hong-Kong-by-way-of-Tortuga as a way-station for the nefarious and desperate alike.

I could speculate that the inclusion of Madripoor in “FAWS” suggests that mutants are on their way into the MCU, but we just went through that futile song and dance with “WandaVision,” and there’s enough going on in this show as it is. Let’s move on!

How much longer can Bucky and Sam trust Zemo?

In “Civil War,” Zemo was so monomaniacally fixated on bringing down the Avengers that he didn’t have time to be funny, so it was a treat to see that “FAWS” has found room for Brühl to employ his deadpan sense of humor. But Zemo also still clearly delights in testing Bucky’s boundaries, acting as if he still has the key to controlling Bucky’s mind — and although Dr. Nagel (Olli Haaskivi) ranked a full Zola on the creepy amoral scientist scale, that didn’t give Zemo license to kill him in cold blood.

Which is to say, Zemo is using Sam and Bucky as much as Sam and Bucky are using him, and at some point soon, the balance of that arrangement is going to tip too far into Zemo’s favor. The question is whether Sam and Bucky will be able to see that coming.

Bucky, at least, did see the appearance of Dora Milaje warrior Ayo (Florence Kasumba) coming, thanks to her — seemingly deliberate — trail of Kimoyo Beads that lead Bucky straight to her. Ayo was the first member of the Dora Milaje to appear in the MCU in “Civil War”; she knows first-hand about Zemo’s murder of King T’Chaka, so it makes sense that she’d come for him.

We know from “Black Panther,” however, that Wakanda rarely sends one person to collect a person as dangerous as Zemo. Are more members of the Dora Milaje with her? From the start, “FAWS” has leaned into what it means to be a Black man in America who is also a superhero; bringing Wakanda, a far different expression of Black excellence, into the show should continue to scramble Sam’s reckoning with who he is and what he means to the world.

Is Sharon Carter the Power Broker? The episode sure seemed designed to lead us to that conclusion. In her years living underground after “Civil War,” Sharon has established herself well enough in Madripoor that she owns a massive penthouse apartment in the High Town district that showcases major stolen artwork. But she’s also intimately familiar enough with the seedy events in Low Town that she clocked Sam, Bucky and Zemo’s sudden appearance there.

She owns a wardrobe that could be best described as villain chic. She’s embittered by being cast aside while Bucky got a full pardon. She tells Sam that “the whole hero thing is a joke.” And she even tells Sam and Bucky to stop chasing after the Power Broker, saying, “You really should steer clear of all this.”

Sharon is also a stone-cold killer now, not hesitating to kill anyone who gets in her way, especially in the extended sequence in which she dispatches the mercenaries hunting Sam, Bucky and Zemo in the shipping container yard. Also, how did she know so quickly to go there, and exactly which container to go to to find Dr. Nagel?

But, if she’s the Power Broker, why would she lead two Avengers to the man who cracked the super soldier serum? Because Karli Morgenthau (Erin Kellyman) stole her entire supply, and like everyone else, she’s having a hard time figuring out where to find the leader of the Flag Smashers — and she’s betting Sam and Bucky will be able to find her. Now that Zemo killed the only man who could recreate the serum, she needs it back more than ever.

At least, that could be what’s going on. If Sharon is the Power Broker, it’s further evidence of just how twisted the world has become — and further calls into question Steve Rogers’ judgement. As Zemo said, when we make people into symbols and icons, we start to forget about their flaws. Perhaps “The Falcon and the Winter Soldier” is meant to remind us that even Captain America was far from perfect.

“The Falcon and the Winter Soldier” streams new episodes Fridays on Disney Plus.