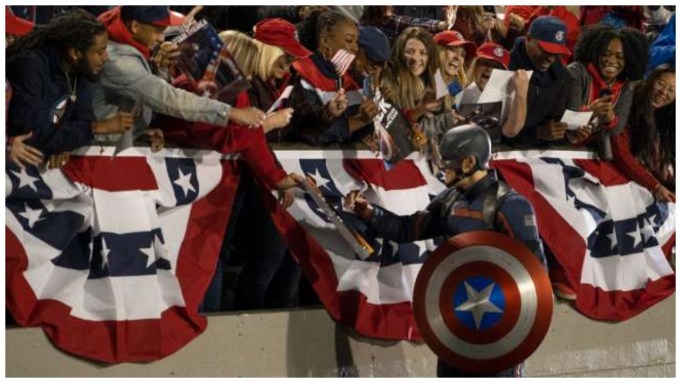 SPOILER WARNING: Do not read if you haven’t yet watched Season 1, Episode 2 of Disney Plus’ “The Falcon and the Winter Soldier.”

Who takes ownership of a superhero’s public persona once they step down from the job, and who has the right to confer it? Catching a glimpse of the “new” Captain America at the end of “The Falcon and the Winter Soldier” premiere last week, after years of only ever knowing it to be Steve Rogers, was like seeing an impostor. The second episode of the series explores the elements of personal and perceived identities — who you say you are, who people think you are, who they want you to be, and perhaps most importantly, who you aspire to be — which, as an Avenger, has a lot of other baggage involved.

John Walker (Wyatt Russell) — aka the soldier that the U.S. government selected to wield Captain America’s shield after Sam Wilson returned it — makes his official debut with nothing less than a splashy “Good Morning America” segment. The pomp and fanfare call to mind the publicity tours a newly super-serumed Steve Rogers was forced to participate in 70-plus years ago in the events of “Captain America: the First Avenger” — how can anyone forget the catchy “Star-Spangled Man with a Plan”? Except instead of selling war bonds, Walker is selling the idea of himself to an American public apparently in need of a new symbol of hope after the Blip.

Sam Wilson (Anthony Mackie) and Bucky Barnes (Sebastian Stan) are understandably irked, but they have different priorities. Sam is on a mission to find the Flag Smashers, the anarchist group who prefers the Blip life, and also appear to have a few super-strong people of their own. Bucky wants Sam to take back the mantle of Captain America, but perhaps for reasons that are entangled with his own redemption journey.

The crowning of the new Cap prompts Bucky to seek out Sam as the latter is about to fly to Munich, telling him, “You had no right to give up the shield, Sam.” To which Sam responds, loaded with meaning, “Hey, this is what you’re not gonna do: You’re not gonna come here in your overextended life and tell me about my rights.”

Finally getting to see Sam and Bucky interact in this episode is a treat, a Marvel-ized action buddy comedy that has them turning a therapy session into a staring contest and bickering over the best way to fend off the baddies. But it also allows them to take the time to figure out who they are supposed to be not simply in relation to Steve Rogers. As Bucky essentially implores of Sam, if Steve was wrong about giving the shield to Sam, was he also wrong about Bucky’s potential to be a better person?

As always, in typical Marvel fashion, this week’s installment gave us a lot to chew on, as well as a number of unanswered questions.

Who is John Walker, the new Captain America?

He went to high school in Georgia. He’s the first person in American history to receive three Medals of Honor.  He’s a counterterrorism pro who is apparently so physically perfect the government has commissioned studies about it.

Despite the knee-jerk “no thanks” to previously seeing him in Captain America garb, this episode takes pains to humanize John Walker, aka US Agent in the comics. The story opens with him sitting in his old high school locker room, waiting to take the stage for the first time as Cap. The weight of expectation, like anyone stepping into someone else’s shoes, is heavy on his shoulders.

And maybe he has more in common with Steve than we thought. His colleague Lemar Hoskins, aka Battlestar, warns him that he can’t just “punch his way out of this one” — where have we heard that before? — and we come to understand that Walker just wants to do the right thing. The guy just wants to be the best Captain America he can be.

But how he goes about doing that is where he diverges from Steve, surreptitiously tracking Sam and Bucky through Sam’s drone Redwing as they follow a shipment of mystery meds across Europe. Walker says he wants to work with them, but it really sounds more like he wants Sam and Bucky to work for him as his “wingmen.” (Steve Rogers would never!)

Where is all this Super Soldier serum coming from?

What the ensuing fight with the Flag Smashers reveals is that there are eight more Super Soldiers in their midst, after nearly 80 years of just Cap and Bucky. The group wants to go back to life the way it was during the Blip, when half the world’s population was wiped out with Thanos’ snap. According to them, the Global Repatriation Committee is less preoccupied the living and more concerned with those who have come back from the dead.

Karli Morgenthau, the leader of the group and a beneficiary of the serum, is hailed as a legend and a freedom fighter. In the comics, one Karl Morgenthau is the Flag Smasher, a person and not a group. Here, Karli seeking refuge with her comrades as they outrun the authorities — and someone named the Power Broker.

How exactly they’re going to create that change is unclear, though. Karli appears to want to help those who have been displaced since the Blip. But who is formulating more Super Soldier serum? Bucky has an idea of who they can talk to — someone he once knew a long, long time ago.

Who is Isaiah Bradley?

Bucky seeks out Isaiah Bradley in Baltimore, revealing that he has known for decades that another Super Soldier has been in their midst. (Between Agatha Harkness in “WandaVision” and now Isaiah, how many other latent super-powered people have just been hanging back while the Avengers did their thing for the last decade?) Apparently they last saw each other during the Korean War in 1951, when Isaiah had ripped off half of Bucky’s robotic arm.

Bucky’s disclosure that he is no longer a killer for Hydra is roundly dismissed.

“You think you can wake up one day and decide who you wanna be?” Isaiah asks Bucky. “It doesn’t work like that. Well, maybe it does for folks like you,” he says pointedly to the former Hydra agent. Unlike the original Cap, Isaiah was not given a hero’s welcome upon his return. Instead, the government put him in jail for 30 years and experimented with his Super Soldier blood. This appears to be a nod to his origin in the comics, where Isaiah is also known as Black Captain America, one of a handful of survivors of super soldier serum experimentation by the U.S. government on Black soldiers, in a parallel to the real-life Tuskegee Syphilis Study.

In the episode, the revelation infuriates Sam — to think, a Black Super Soldier, dormant and mistreated for decades. Immediately underscoring his outrage are a bunch of Baltimore cops confronting him until they realized they have pulled over a national hero. It’s yet another reminder that no matter how much you believe you’ve proved yourself, some people will be unable to see past their own preconceived notions of who you are.

What does Helmut Zemo know?

We knew Daniel Bruhl’s Helmut Zemo would reappear in “Falcon” after last seeing him try to avenge his family and wipe out superheros in “Captain America: Civil War,” so it was only a matter of time before Bucky and Sam took a trip back to see this Sokovian about a thing — specifically, someone who knows both a lot about Hydra and about Super Soldier serum.

But locked away in isolation in a high-security cell, what could Zemo possibly know? The only certainty is that we’ll soon have answers, just not this week.