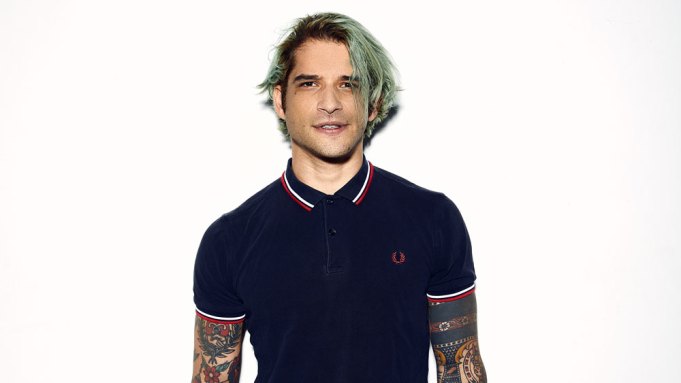 Tyler Posey is eager for a “Teen Wolf” reunion.

“I’ve been coming up with concepts in my head for the last few years texting them to [series creator] Jeff Davis, ‘Hey Jeff. We need to do this idea,’” says Posey, who played title character Scott McCall on the MTV series, which ran for six seasons before ending in 2017. “So I’m a huge advocate of bringing ‘Teen Wolf’ back.”

While the series shot him to stardom, life is a bit different now for Posey. At 29, he’s no longer a teen idol. Now, he’s an actor with a serious rocker side. He recently dropped his debut single “Shut Up,” featuring vocals by Phem and Travis Barker on guitar.

Tell me about “Shut Up.” Is it a song written about someone?

It’s a song to somebody, but it’s really relatable and very real and personal to me. But there’s also some parts that are a little elaborated for poetic reasons for music writing, and stuff like that. For the most part, it’s about me and my ex. I guess it’s a little bit shut up to her and to myself. I got sober in quarantine just to break some bad habits that I’ve had since I was a kid, smoking pot, drinking. So I was full on sober for about five months and just really trying to take care of myself and was meditating every day and praying, not to anything religious, just a higher power and just feeling like something bigger than me in the world. It’s a culmination of a couple of years of substance abuse, me with this girl and our relationship and experiencing what it’s like to be depressed without having any substances to curb that.

How’s your sobriety these days? How are you doing?

When I first got sober, I definitely really wanted to break these habits that I had. That was most of it, because I never really considered myself an alcoholic. There was moments of substance abuse that I felt like I had control over, but I just always viewed myself as a lazy pothead. I didn’t know how long I wanted to be sober. I’ve since started coming back into the other world, the other side of things, so I’m technically not sober anymore, but I keep in touch with everybody. I learned a lot about myself.

Was it difficult to film “Teen Wolf,” knowing that you’re going home, you’re smoking weed, you’re partying, but all these young people are looking to you because you’re supposed to be a role model?

It was definitely weird, because it made me question who I was and who I wanted to portray myself to the world. I didn’t know what version of myself I wanted the world to see. I’m very much unfiltered and it’s hard for me to be anybody else other than myself, but there were moments when I would show a little bit too much, where I was smoking weed and [post it on social media]. My managers would come back at me like, “You’re not supposed to post this stuff.” The real substance abuse and all that kind of stuff started pretty recently. It was about maybe two years ago when “Teen Wolf” was already over.

You recently said you were conflicted about being on OnlyFans because you were being objectified. Doesn’t that come with doing OnlyFans?

I think so. OnlyFans, where do I start with this? I don’t feel that way anymore, objectified, because what fixed that was that that’s going to happen no matter what. OnlyFans was a trip for me. Bella [Thorne] is my friend through the whole entire thing, and she helped me get into it. She hit me up one time after I posted some pictures. She’s like, “This is more skin than you need to post on OnlyFans. Call me.” I really liked her pitch. It was really cool. A way to be artistic and push out different content, new content. It’s also been a big experiment for me, because I’ve never been a model. I felt icky modeling. So it’s a little bit of me stepping out of that box and out of my comfort zone and trying new things. Plus it also gave me a really good platform to be really open about my sexuality. It’s being really in contact with my fans, releasing creative new content that people don’t see anywhere else, and being really open about anything, whether it’s sexuality or drug abuse or anything. That’s where I really found my footing.

You came out about being with men on OnlyFans.

It was just a split-second decision. I didn’t think about how it would be received or what kind of press I would get on it, but I woke up the next day and it was all these tabloids about me coming out as pansexual. I didn’t label that. The kids, the fans, or whoever wrote those articles labeled that. I thought that was really interesting that it just broke down this wall that I didn’t feel like I put up, but it was easier for me to just be honest about all that stuff. I’m just really trying to make it artistic, but if I have to show my butt, I want to make it really funny, not take myself seriously, and bring that to OnlyFans, because that’s who I am. I am a little taboo. I’ve always been a little bit edgier and sexually inclined and just wanting to push the envelope in a bunch of different ways.

So when you talk about your sexuality, going back to those days with earlier managers who were telling you, “Don’t smoke weed. Hide your tattoos,” were they also saying, “Don’t be open about anything you like sexually, unless it’s hetero, cisgender, white”?

There wasn’t anything too crazy that came up that would warrant that sort of response from them. I did have some leaked footage of me online a little while ago. That was my fault, but it did show the world that I am this sexual — I don’t want to say deviant — but there’s a side of me that is definitely not on the surface of what you normally see. So they did come at me for that a little bit, which is understandable. I had some stuff leaked online that probably isn’t favorable, but I didn’t release an apology about it and that made it easier for people to forget about. I didn’t bring attention to it. They wanted me to. They definitely wanted me to say, “Look, I’m sorry. I’m ashamed of myself,” which I wasn’t, and I wasn’t sorry. I didn’t want to lie and say that.

How gratifying is it to hear from young people who say, “Thanks for being you?”

There’s been some really good feedback from that, and just really being able to connect with kids my age or a little bit younger and just showing them that I’m going through similar stuff. My dad called me after all this came out — I never told him anything about this stuff — he called me saying, “Hey, buddy. Just making sure you’re OK. I don’t want you to get overwhelmed or stressed out.” He was totally cool about it, and I was like, “Yeah, man. I just didn’t want to hold myself back, and I had an interest in trying new things,” and he was like, “Okay, well, I understand that.” Fortunately, my dad was awesome. I’ve told people, kids who are worried about telling their parents my dad’s reaction, and they’re like, “Okay. Well, maybe my parents won’t be so hard on me if I tell them.”

This interview has been edited and condensed for length and clarity. You can listen to it in its entirety above. You can also find “Just for Variety” at Apple Podcasts or wherever you enjoy your favorite podcasts.