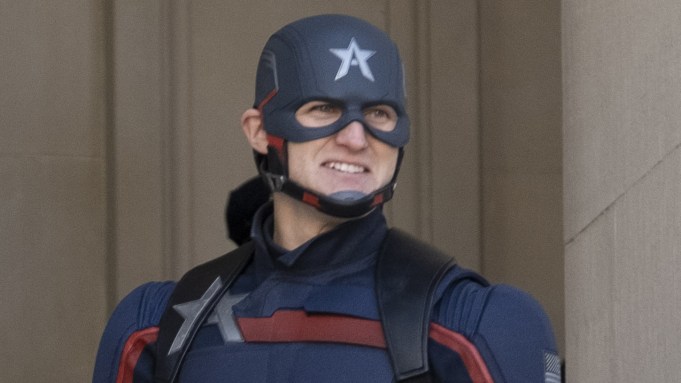 Like so many actors before him, when Wyatt Russell first auditioned for the Disney Plus series “The Falcon and the Winter Soldier,” he had no idea what character he was trying out to play. It was only after he landed the gig that Marvel Studios told him he’d booked the role of John Walker, who takes on the mantel of Captain America after Sam Wilson (Anthony Mackie) turns it down. Initially, Russell didn’t want it either.

“My first reaction was like, ‘Ewwohhh, I don’t know if I’m your guy to do that,'” Russell said over Zoom. “I kind of had some doubts.”

Eventually, Russell came around, in part, as he explained to Variety, because Marvel made clear they didn’t want him to play Steve Rogers 2.0. Based on the vituperative fan reaction so far to John Walker on the show — as Russell says, “They just hate him!” — it’s safe to say Russell has effectively made his Cap quite different from Chris Evans’. Here’s what Russell had to say about picking up Cap’s shield, working with Mackie and Sebastian Stan, and what it was like to see his face meme’d across the entire internet.

The first time we really meet John on the show, he’s feeling the weight of this role that he’s taking on of being the new Captain America. It sounds like you felt a little similar in being asked to do essentially do the same thing?

It was honestly more of my interest in playing the character where you don’t want to do anything that’s been done before. Obviously, that wouldn’t be interesting. And then do I want to be the guy who’s — do I want to wear the Captain America suit, to be honest. It was like, wow, you know, I don’t know. That did have elements of what John Walker was [dealing with], and when they kind of explained to me where he was and what he was, it fit how I felt about it in a way. I thought that actually, it may be a good fit. I just felt the weight of, can I be what they’re gonna want me to be? Or are they gonna lose a bunch of money?

Did you study Chris Evans at all in preparing for the role, his mannerisms or movements as Cap?

Yeah, I think in some ways, for sure. In John’s world, he looks up to Steve Rogers, and wants to embody that. When you’re seeing him do his version of it, is it really who John actually is? Or is John trying to be someone that he’s not?

The training was crazy. The shield is very heavy and awkward. You don’t know where to put your hand sometimes. And that’s why you have this incredible stunt team. They can do backflips off a 10 story building. Anything you ask them to do, they can pretty much do. So I worked a lot with my stunt performer, Justin Eaton. We worked on a lot of shield work and footwork and all kinds of things to try and prepare us to look like we knew what we’re doing.

The first impression that I had of John is that he’s a slicker and maybe more corporate version of Captain America than Steve Rogers. How should we expect him to evolve this season?

I think there is a corporate aspect to the inception of his character as Captain America. I think that what you’re seeing now is him battling with, “How do I be me and deal with this corporation that is the U.S. government?” It’s the only corporation he’s ever worked for and it’s worked very well for him in his life. Now he’s in this different world where there’s a PR aspect to it. He’s just been working in the clandestine world, most likely, where nobody really knows what he’s doing but he’s getting the job done. And now it’s like, Okay, go do that as Captain America — and sometimes his version of getting the job done is a little bit not the same.

It sounds like the version of John Walker that you’re playing is slightly different than the one that we’ve seen in the comics. In the comics there’s a storyline where he has a whole pro wrestling part of his life.

I didn’t know that, but I would love for that to pop in at some point. John Walker, the pro wrestler — bring it on! That was part of the problem with reading the comics. As soon as I started the Wikipedia rabbit hole search, it was like, this is a bad idea. There’s 19 different versions of him in different worlds with different people! In one, he gets sent to Canada? I don’t know what the hell’s going on. I’m just gonna read the script.

The other thing that is very clear in the second episode is that Sam and Bucky really do not like John. How did that dynamic work on the set?

Yeah, they hate me in real life and I’m okay with it. [Laughs] No. They’re just funny, easy-going people. It makes it very easy to work with and try and be good. I can’t say enough good things about them. I said to Sebastian a year ago, I just felt very lucky to be brought into the Marvel world with those guys, because they made me feel really comfortable and confident and all the stuff that you would hope to feel.

Finally, there were a lot of memes of your face after the first episode. How did you feel about that?

I don’t have social media, but I’ve gotten some of the stuff sent to me from friends that were just too good not to see. The best one is the “Up” guy with with the helmet on. It’s fucking unbelievable. I mean, whoever did that deserves an award of some kind. It’s flattering. They just hate the guy. They just hate him! It was fun to be the Marvel punching bag for a little while.