Plus ‘Hawkeye’ leaves viewers with serious pasta cravings, BTS performs at Jingle Ball and the first ‘HIMYF’ trailer drops -- with an appearance from Kim Cattrall 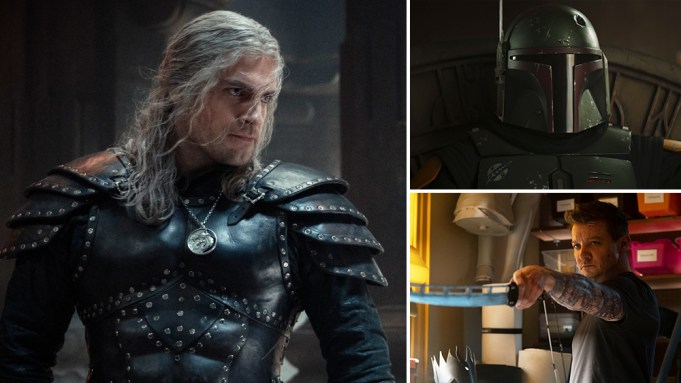 The much-anticipated second-season debut of “The Witcher” landed at the top of Variety’s Trending TV chart for the week of Dec. 13 to Dec. 19. The Netflix series had been long delayed as a result of COVID, but eight fresh episodes finally dropped on Friday, to the joy of fantasy fans everywhere.

SO much to discuss, and yes, we'll do it here too! Let's have real conversations about what happened in S1, what developed in S2, and what's going to happen in the future. Bring your critique, your love, your mixed opinions, I accept them all!

The show debut itself, finale twist and subsequent questions that the storylines raised weren’t the only topics of conversation though. Those who stuck around after the Season 2 credits rolled were also treated to a new trailer for the upcoming prequel series, “The Witcher: Blood Origin,” starring Michelle Yeoh as Scian -- the last survivor of her sword-elf tribe.

Yeoh wasn’t the only person who left Twitter abuzz this week, as BTS once again caused a social media frenzy during an appearance on The CW’s televised “Jingle Ball.” The concert, which re-airs on Christmas Day, is the group’s last publicized event before their previously announced “period of rest,” so ARMY definitely savored the group’s “Dynamite” performance. So much so that the “Jingle Ball” had more than 219,000 engagements this week, catapulting it to No. 2 on the trends list.

RT if you’re dancing in your living room rn 🕺👏 our @BTS_TWT boys look like 💥DYNAMITE💥 on the iHeartRadio Jingle Ball Stage! 💜 #BTSARMY

Tune in on @theCW to catch their performance! pic.twitter.com/4ZSgChVCZP

A new episode of “Hawkeye” rounded out this week’s Top 3 most-talked-about shows on Twitter, partly thanks to the internet’s new pasta obsession. Seeing Yelena (Florence Pugh) whip up some mac ‘n’ cheese with hot sauce wasn’t just a callback to a younger version of her character, who demanded the comfort food as a kid in the film “Black Widow,” it was also a great way for Yelena and Hailee Steinfeld’s Kate Bishop to bond. Fans, shall we say, ate it up.

Hailee Steinfeld and Florence Pugh macaroni scene on Hawkeye… highlight of the entire MCU, for me.

hawkeye out of context: macaroni in a pot

Additionally, another Marvel veteran made an appearance this week, as (SPOILER!) Vincent D’Onofrio’s Kingpin was spotted for the first time since Netflix’s “Daredevil.”

Serious carb cravings aside, the internet was definitely on a hero high. The Arrowverse’s five-week “Armageddon” storyline came to a close on “The Flash,” with an episode that saw Katherine McNamara reprise her role as Mia. The show jumped in online popularity as a result, as viewers celebrated the beloved character’s return.

Last, but not least, premiere date confirmations bolstered the popularity of two other shows. Although Disney Plus had previously announced the Dec. 29 launch date for “The Book of Boba Fett,” the streaming service dropped a new teaser on Tuesday that thrilled “Star Wars” fans all over again, as anything relating to “The Mandalorian” tends to do.

He is Boba Fett.

Meanwhile, Hulu confirmed that “How I Met Your Father,” a.k.a. the female-led reimagining of “How I Met Your Mother” from “This Is Us” co-showrunners Isaac Aptaker and Elizabeth Berger, debuts on Jan. 18. Rather than release another still or teaser, the show dropped a full-length trailer -- one that put new narrator Kim Cattrall front and center.

Who's ready to have the time of our lives? 🙌

Watch the trailer for #HIMYF now, and make sure to ❤️ this Tweet to receive reminders from us. How I Met Your Father premieres January 18, only on hulu. pic.twitter.com/vZpzMaAf4F

Considering fans have been divided over Cattrall’s absence from the new “Sex and the City” revival, “And Just Like That,” her appearance on another show caused an online frenzy.

The fact that @KimCattrall is in the HIMYF show playing @HilaryDuff in the future has me so fricken excited!! Can’t wait to watch this show!! #HIMYF #HIMYM

Of course, “HIMYM” and Hilary Duff fans were already looking forward to the show long before Hulu revealed Cattrall’s involvement. For them, the trailer is just another reminder that there are indeed positive things to look forward to in 2022.

Variety Trending TV Charts, powered by Twitter and sponsored by DIRECTV, reveal the most-talked-about programs each week by measuring engagements -- a combination of tweets, retweets, likes and hashtags.