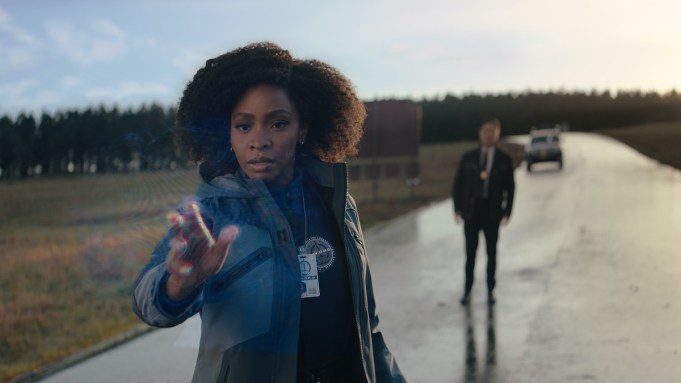 It’s well established that any actor doing an interview about an upcoming project in the Marvel Cinematic Universe has to safely navigate a minefield of potential spoilers. Even so, when Variety recently talked with Teyonah Parris about her role in Marvel’s ongoing Disney Plus series “WandaVision,” a seemingly innocuous question about director Nia DaCosta — who was hired to direct the upcoming Marvel feature film “Captain Marvel 2” — seemed to momentarily catch Parris off guard, as if she wasn’t sure whether she’d unwittingly stepped on another mine.

Since Parris stars in DaCosta’s upcoming horror film “Candyman,” and is set to reprise her “WandaVision” role of intrepid S.W.O.R.D. agent Monica Rambeau in “Captain Marvel 2,” did DaCosta reach out to Parris while she was in the running for the directing job?

“Um,” Parris says, appearing to search for the right words. “I’ve talked to Nia since ‘Candyman.’ So…yes?” She laughs. “I’ve just talked to her all the time.”

Specifically, though, did DaCosta tell Parris she was talking to Marvel about directing “Captain Marvel 2” and seek out any advice?

Fortunately, Parris was able to talk about Monica’s potential future within the MCU — in the comic books, she gains superpowers, and becomes the superhero Photon — as well as how “WandaVision” navigates race through the lens of its tour of the American family sitcom. Just don’t ask her if Monica knows Reed Richards.

When did you really start to understand just how successful “WandaVision” had become?

People have been tweeting and tagging and Instagramming and sending me those things. So I realized that people were excited about the show, and that’s exciting, because we obviously are, too. But I read that it was, like, number one in the world? And that’s a whole other level of, Whoa, okay, that’s pretty cool.

One thing that’s been so uncanny is how this show is connecting with our current pandemic moment — feelings of overwhelming grief and isolation. Obviously, you weren’t making the show, at least the bulk of it, with that in mind, but how has it been for you to see that connection happen?

It’s been pretty bizarre, because, like you said, when we first started the show, it was pre-pandemic, so it definitely wasn’t with that in mind. The way they’ve lined up the synergy between the storylines has been pretty incredible to watch. But we had already filmed most of it, pre-pandemic.

Another compelling aspect of “WandaVision” is how it acknowledges how Black women have been sidelined and marginalized in American television over the history of American TV, like how S.W.O.R.D. Director Hayward (Josh Stamberg) disregards Monica’s insights and keeps information from her,  and there’s his line to Monica, Darcy (Kat Dennings) and Jimmy (Randall Park), “Are you the sassy best friend?”

So was that something that you guys discussed on set?

Not that aspect, no. I talked to Matt Shakman, our director. We had many conversations before we got on set trying to find the balance between what we know to be true — which is in the history of American sitcoms, these Black characters were sidelined or pushed to the back — and then also in this world, that is not necessarily the case. There is an aspect of it that I did have to lean into in order to keep it true to the time period. But what I love is that we have gotten to see the evolution of where Black women have lived in these spaces, and so as she goes from this sidelined space to modern day, Monica is taking charge and trying to lead this investigation in a way that is empathetic, with compassion and understanding, realizing that Wanda is grieving and Monica dealing with her own grief of having lost her mother while Monica was blipped away. I think this is her way of unpacking her own grief and trauma by trying to help Wanda through hers.

You’ve said that you really only knew that you were auditioning for “WandaVision,” as opposed to auditioning to play Monica in the larger Marvel Cinematic Universe. But the show really does seem to be setting up Monica to become the superhero that she becomes in the comics. When did you realize that Monica becomes a superhero in the comics?

Oh, I knew Monica was a superhero before I even got the role because fans on Twitter had been fan-casting me as Monica Rambeau. This is way pre-“Captain Marvel.” So I looked her up, just very casually, like, “Oh she’s pretty cool. She’ll never see the light of day. Moving on!” So that was really my introduction to her, maybe, like five or six years ago when fans started doing that. So when she showed up in “Captain Marvel” as a young girl, I was like, “Ooo! Okay!” But again, I didn’t expect that she would become a full grown woman and character in the MCU. So it was a pleasant surprise to learn that not only would I be able to tell this woman’s story, but that the world would be able to see another Black female superhero in the MCU.

So as you pointed out, Monica would be one of the very first human Black women characters to become a major superhero. I know this is tricky because you don’t want to spoil anything…

So could you talk at least a little bit about, from a representation standpoint, what it what it would mean to have a Black woman be a superhero in this context?

Absolutely. It’s no secret to any of us that it’s not often we get to see Black people in the superhero aspects, but particularly Black women. I would say there’s been a disproportionate amount of men to women, and that’s in everything in life, if we’re honest. So being a Black female superhero is really exciting for me because, especially in this context, being in a show where you’re in people’s homes, I get the opportunity for people to see this Black woman and to empathize with her, to get to know her. They begin to engage with her humanity. And I think that’s so important, and it’s important for young kids of color to see people that look like them — young Black girls, young Black boys and just everyone — to be able to have that opportunity to see people that look like them, or not, and to get to know who they are, engage with them. That’s really an honor.

There’s been a lot of speculation that the friend that Monica is going to go see might be Reed Richards, the character who ends up becoming Mr. Fantastic. On a scale of “not happening” to “I’m going to be silent and my silence will confirm your anticipation is warranted,” what should we expect?

You should expect to keep watching and find out what happened. Okay, that wasn’t silent and it wasn’t the other one. I’m not even looking at you right now! I’m trying not to get into it with you!