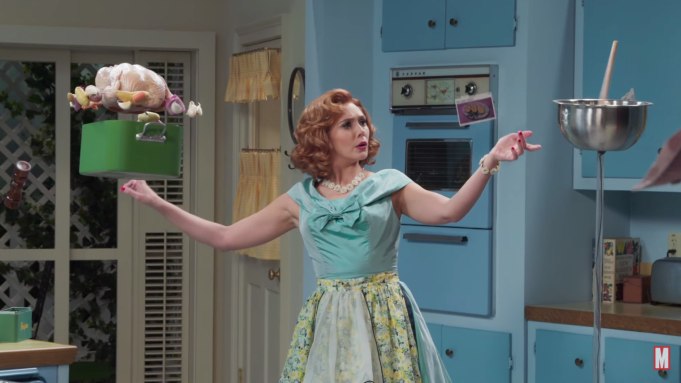 Now that nine-part epic “WandaVision” has wrapped and the premiere of “The Falcon and the Winter Soldier” is still a week away, Disney Plus has released a new documentary-style special to tide viewers over until then.

“Assembled: The Making of ‘WandaVision'” features interviews with showrunner and exec producer Jac Schaeffer, director Matt Shakman, and stars Elizabeth Olsen, Paul Bettany, Kathryn Hahn and Teyonah Parris. The hour-long program also offers a delightful deep dive with the show’s visual effects and production design wizards responsible for the Marvel magic, as well as composers Robert Lopez and Kristen Anderson-Lopez. (For more on the music, watch this Variety video interview with the “Agatha All Along” songwriters.)

Here are some highlights from this peek behind the curtain.

“It was always our dream, that if we did a true multi-camera show, that we would have a live audience,” says Schaeffer in the special. “We knew it was a risk, we knew it would be an expense — almost an indulgence — but for the actors, for the energy, and for the crew, it will be really exciting.”

Olsen, Bettany and the rest of the cast look positively joyful filming in front of a live group for the 1950s-style “The Dick Van Dyke Show”-inspired episode. “WandaVision” committed to the period even behind the scenes, seating audience members in old school wooden chairs and asking them to come dressed up in 1950s garb. (Presumably a Marvel-sized NDA prevented them from leaking any spoilers.)

For Olsen, the setup was reminiscent of her ’90s childhood watching her sisters Mary-Kate and Ashley Olsen in action as “Full House” character Michelle Tanner.

“I’ve done theater before, but shooting a TV show in front of a live audience was a strange meta experience for me because I grew up on the ‘Full House’ set watching these live tapings on Fridays, never thinking that would ever be a form of reality for me,” says Olsen in the program.

Steve Rogers may have “America’s ass,” but Vision’s synthezoid posterior was perfected in a prop shop.

The dress helped to improve her posture, she says, shimmying from side to side, before Bettany interjects.

“I have exactly the same thing, but with my fake butt. It makes me stand properly and makes me want to do this too,” he says, waggling in his brown trousers.

Artificial rear aside, the show’s visual effects team found that Vision’s usual crimson-red visage just didn’t translate to black-and-white television, so they turned Bettany’s face blue instead to get just the right shade of, well, gray for the final product.

“We did tests using footage from the previous films as my first week on the job,” says visual effects supervisor Tara DeMarco in the special. “We knocked on a colorist’s door and said, ‘Can we see what he looks like?’ And we quickly realized he would have to be blue.”

That makeup trick is apparently right out of the book of The Way TV Used To Be, when actresses in the ’50s and ’60s wore blue lipstick so it would appear “red” in black-and-white shows.

Director Shakman’s appreciation for old-school TV is apparent in the way he lovingly talks about “The Dick Van Dyke Show” and the live-theater aspects of the “WandaVision” homage. The Geffen Playhouse artistic director and former child actor, who has helmed episodes of “Game of Thrones” and “The Great,” brought on special effects coordinator Dan Sudick for some very non-Marvel-style effects.

Those sticks of butter that Wanda floats through the air as she’s trying to craft a homemade meal for Vision’s boss and wife? No CGI there, just wires and rods coordinated by Sudick, who came up under the artisans who worked on “Bewitched.”

Instead of relying on digital magic to poof that chicken roast into eggs, Olsen freeze-framed herself into place while the crew switched out props.

That all changed for the later episodes of course, when Olsen says they spent the last six weeks of filming harnessed to wires, as they shot the battle scenes between Wanda and Agatha Harkness, and Vision and Ghost Vision. The doc offers a look at the massive scale and breadth of the effects required for all nine episodes.

Says Kathryn Hahn, “I think my most gratifying [moment] was when I finally put on Agatha’s hero look and was able to be raised up in those wires for the first time and feel those huge fans on me, even though it was a hundred and something degrees outside. It was crazy just to feel all the work of all these people that had gone into collaborating, into helping make her.”

“WandaVision” was a seed planted long ago, perhaps?

In remembering the years-long journey from filming “Avengers: Age of Ultron” to “WandaVision,” Olsen alludes to the idea that somewhere, someone at Marvel was already exploring the idea of a proper Wanda Maximoff-Vision romance.

“Starting with ‘Ultron,’ Marvel was really so excited to bring Wanda into the MCU, and was only really teeing me up for possibilities that we didn’t know if we would actually fulfill those possibilities or not,” she notes. “So we would kind of place Easter eggs in certain places, whether it’s just a glance too long with Vision or just, we were trying to play around with that in ‘Age of Ultron.’”

As for Bettany, he remembers when Jon Favreau was making the first “Iron Man” film and called up his old “Wimbledon” co-star for a role that wasn’t originally supposed to appear onscreen.

“He rung me up and he said, ‘I’m making this movie with Robert Downey and he’s Iron Man, and I need a sort of really boring, personality-less voice for the computer that runs this world, and I immediately thought of you, Paul,'” Bettany laughingly recalls. “How do you say no when you’re asked so nicely?”

In typical Marvel secrecy, much of “WandaVision” was kept under wraps, even from the actors themselves.

“I was just sent some sides,” says Teyonah Parris of the audition process, who was cast before learning who she would play. “I think it was the ‘70s episode. I was very confused. It didn’t say it was ‘70s, but it’s high farce. And I was like, ‘What do I do with this? I’m not sure, because it’s not Marvel as my mind can process.”

“Assembled: The Making of ‘WandaVision'” is now streaming on Disney Plus.