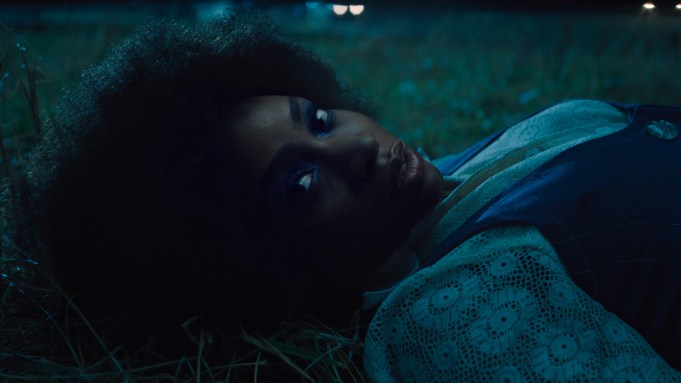 SPOILER ALERT: Do not read if you have not yet watched Season 1, Episode 3 of Disney Plus’ “WandaVision.”

The curtain has finally lifted on “WandaVision” — and it’s left us with even more questions. In the final minutes of Episode 3, Monica Rambeau (Teyonah Parris) risked blowing her cover as Geraldine to connect with Wanda (Elizabeth Olsen), only to have Wanda seemingly blow Monica out of their sitcom bubble and into the real world. Now we know definitively that Westview really is some kind of militarized simulation, surrounded by some kind of Marvel-y energy field and whole lot of soldiers. Who is running it and why Monica tried to infiltrate it, however, remains tantalizingly out of reach.

This week’s episode stepped into the 1970s kitsch-y modernism of shows like “The Brady Bunch” without seeming to miss a beat from last week, when Wanda discovered she was suddenly and quite noticeably pregnant. By the end of the episode, Wanda’s given birth — to twins! — in what appears to be less than a day. And that’s not the only peculiar development this week. So let’s get right to the big, burning questions.

Is Wanda really in control?

At the end of last week’s episode, Wanda seemed to rewind reality once she saw the Mysterious Beekeeper pop out of a manhole cover. In Episode 3, her time-reversing abilities appeared to get an upgrade: After Vision (Paul Bettany) voiced his suspicions that their reality is somehow “wrong,” the scene simply cut back to a few seconds earlier, and Vision shifted back into reassuring husband mode.

Between that moment and Wanda appearing to exile Monica from Westview (more on that later), it seems that Wanda wants to be living inside a sitcom fantasy, and she’ll go to great lengths to maintain it. That’s the impression given by this week’s fake ad for “Hydra Soak,” a mysterious bath item with an eyebrow-raising name that promises to help you “escape to a world all your own … when you want to get away, but you don’t want to go anywhere.” Certainly seems like what Wanda’s been doing!

All that said, it also seems like Wanda isn’t that in control of her powers within this world. First, of course, there was her rapid pregnancy, and the wacky shenanigans caused by her (first Braxton-Hicks, then real) contractions. The mobile of butterflies Wanda placed over the crib and the stork she painted on the wall both became real without any conscious effort — and, in the case of the stork, caused some very sitcom-y consternation for Wanda when she couldn’t make it disappear. Indeed, Wanda’s powers manifesting in this way seem at odds with the idea that she just wants to live a “normal” life inside a TV-inflected fantasy.

All this confusion, by the way, is in keeping with the ways Wanda’s powers have altered reality within the Marvel Comics — sometimes she’s in command of what she’s doing, and sometimes she very much isn’t. Which leads to the next question:

What else did Wanda’s contractions cause?

Wanda’s first big contraction caused the power to short out in the neighborhood. Later, when her water broke, it started raining inside their house — and at least in Monica’s as well. Her contractions even caused the coats she threw on to hid her pregnancy from Monica (a fun wink at how pregnancies have been historically hidden on sitcoms) to suddenly change.

So, is this only affecting the world of Westview, or perhaps the outside world as well?

It’s clear now that when Wanda apparently disappeared into Westview, people took notice, and they’ve been trying to break Wanda out of it — or at least reach her inside it. That could just be because Wanda’s an Avenger, and people will notice if she’s not around. But Wanda did quietly disappear once before with Vision in “Avengers: Infinity War,” so it’s not like it’s out of the ordinary for her. So, what if Wanda’s powers bleeding into Westview also means they’re starting to bleed outside of it, too — and that’s becoming a problem?

What is Agnes trying to hide?

Around the time Monica/Geraldine showed up at Wanda’s doorstep, Agnes’ (Kathryn Hahn) absence in the episode to that point felt jarring. Barging into Wanda’s life at the most inopportune moment is kind of the nosy neighbor’s job, isn’t it?

It seemed Agnes felt the same way. After the twins were born (more on them later), Vision saw Agnes and Herb (David Payton) conferring in a hushed and urgent fashion. You could even hear Agnes say, “What is she doing here?” When they saw Vision, Agnes laid it out for him: Geraldine is so new to town, she doesn’t have a family, or a husband — or a home.

When Vision pushed further, though, Agnes clammed up — and forced Herb to stop talking as well (after he finished trimming his hedges, and the concrete wall behind them). It became clear that Agnes, as well as at least some of the other citizens of Westview, are at least nominally aware of their strange circumstances. So what truths are Agnes protecting, and for what purpose?

Are Wanda’s twins, you know, real?

At the very least, little Tommy and Billy are miraculous, gestating in what seemed to be little more than 48 hours (though the fuzzy passage of time in “WandaVision” is one of its many hat-tips to sitcom storytelling logic). Given that Vision should be dead and they’re all living inside a series of homages to bygone TV shows, it’s fair to say that Tommy and Billy’s corporal permanence is meant to be up for debate — especially if you know anything about the twist-y story of Wanda’s twin boys from Marvel comics.

If you don’t want to be potentially spoiled for what could be ahead on “WandaVision” — and the larger Marvel Cinematic Universe — skip to the next section.

In the comics, Thomas and William were born to Wanda and Vision (who remains very much alive), despite the fact that Vision isn’t strictly a biological being. For a time, the boys lived a normal life, until Wanda discovered that when she and Vision would leave home to do superhero stuff with the Avengers, their children would simply vanish from existence. They were only real so long as Wanda consciously made them so. (Wanda’s discovery, by the way, is catalyzed by none other than Agatha Harkness — the same sorceress that some suspect is Agnes’ real identity.)

One wildly convoluted comic-book-y storyline later, Thomas and William’s souls became reincarnated in flesh-and-blood human boys, who went on to become the superheroes Speed and Wiccan — and members of the Young Avengers. Wiccan also became one of Marvel’s most prominent LBGTQIA+ characters.

Whether any of that is actually going to happen in “WandaVision” or the MCU remains to be seen, of course. But Kevin Feige and company don’t dabble in these things lightly.

What was Monica trying to accomplish?

The first major fissure in Wanda’s facade came after her twins were born with Monica’s help. As she gazed at them, Wanda, in a far-off voice, mentioned to Monica that she, too, was a twin — to a brother named Pietro — and then began singing what sounded like a Sokovian lullaby.

Monica looked thrown, and then she dropped her guard. “He was killed by Ultron, wasn’t he?” she said, referring to Pietro’s death in 2015’s “Avengers: Age of Ultron.”

So Monica is keyed into some critical Avengers intel, but bringing it up at this particular moment with Wanda was the wrong move. Wanda looked like she had been slapped, and turned on Monica, demanding she explain herself and the familiar sword symbol around her neck. The show cut away to Vision’s encounter with Agnes and Herb, and then when it cut back, Monica was nowhere to be seen.

“Oh, she left honey,” Wanda told Vision. “She had to rush home.”

The next we see of Monica, she’s exploding out of Westview and landing in a daze as a phalanx of soldiers rush towards her as if she’s a hostile invader.

So, is Monica a member of S.W.O.R.D.? Was she sent inside Westview to break Wanda from her domestic reverie? And what happens now that she’s on the outs? Guess we’ll find out next week, when “WandaVision” skips to the “Family Ties”-era 1980s.