By
Meredith Woerner, Adam B. Vary 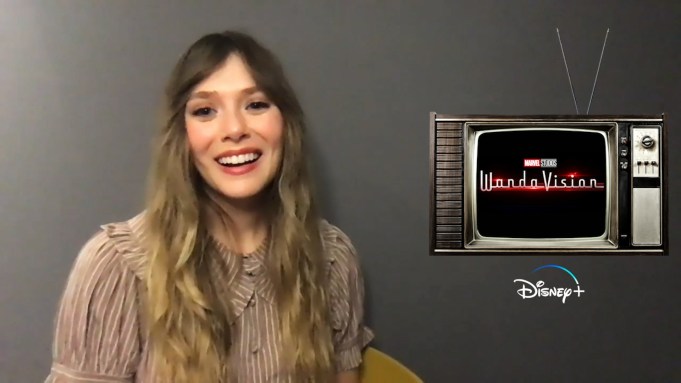 Elizabeth Olsen’s big-screen portrayal of Marvel’s Scarlett Witch led the franchise’s foray onto Disney Plus with the actor’s starring role for the small-screen series “WandaVision.”

The spinoff sees Olsen reprising her character alongside Paul Bettany’s Vision, as the duo is seemingly stuck inside various classic sitcoms, seemingly unaware as to how they got there or why. Each episode jumps into a new decade stuffed with sitcom-centric characters, clothes and gags. But the real treat is how Olsen seamlessly leaps from Mary Tyler Moore housewife to “Brady Bunch” channeling lead.

Here, Variety talks with Olsen to breakdown her process of decade leaping acting, and uncover everything she learned at the “sitcom bootcamp.”

How soon after shooting ‘Endgame’ did Marvel reveal they wanted to make a TV show about Wanda and Vision?

“Infinity War” had just come out and we were picking up what we didn’t film for “Endgame” because filmed them at the same time. I was in LA and Kevin Feige asked me to come in for a meeting. He and Louis D’Esposito let me know that Disney Plus was launching — and they’re giving Marvel the opportunity to bring some of the MCU onto the streaming service. That kind of freaked me out because I’m so used to these characters being on huge group experiences. To think about these characters being morphed to a small TV screen kind of freaked me out, because they’re larger than life characters; they’re superheroes. So that was intimidating, but that’s when Kevin told me his nucleus of the idea [for “WandaVision”]. They wanted to tell the story of Wanda and Vision living in the suburbs, through the guise of American sitcoms and have this “Twilight Zone-y” aspect to it. I thought that was awesome. I was excited by that and intimidated. I’m used to being able to dissolve into an ensemble in these movies. It’s kind of scary to step up in that way, but most things that are scary are worth it.

I understand that you went through a kind of sitcom boot camp prior to shooting, what specific things did you pick up doing that?

We really tried to make everything very era specific. For me [it was about] just trusting the hair; the makeup; the costumes; Jess Hall, our [director of photography], with his lenses and his lighting. I was responsible for my voice, my diction, my posture and moving through space. It’s all the geeky things like, what part of your voice are women speaking from? What is the rhythm and the pattern and the diction of the language of speech? It’s getting into that mode, which isn’t specific to the time it’s specific to the sitcoms of the time. Which was really fun, because it’s not a grounded thing. It’s something that you’re kind of allowing yourself to send up, which you feels wrong as an actor, but feel so good.

The ’70s women were allowed — it was almost like there is was a relaxation of women and social behavior, and so that would affect their voices and the tone that they can take. Instead of it being kind of a higher and level [like in the ’50s]. The ’70s, even though it’s this really strange “Brady Bunch” aspirational time in sitcom land, women were able to have a bit more control, something that grounded them a bit more in their voice. Then as we got into the ’80s, there were the teachable moments, and how sincere everything was, that was really funny. And then as we move into the arts and into the ’00s and the 2010s, the sitcom becomes really cynical. The humor, like “Malcolm in the Middle” and “Modern Family” becomes incredibly cynical. And that’s what we found comforting for whatever reason as a society.

It was fun when we were in this boot camp to not only chart the physical changes, as tools, but to also [discover] what comedy was for that time. “Rosemary’s Baby” is a film and “Brady Bunch” is on television, it doesn’t make any sense to me. But for whatever reason, that’s what that’s what the consumer was watching at home.

How do you keep a hold on who Wanda is with such a wide range of experience of literal places that she’s in and the story she’s telling?

You just trust the writing. This character — her core, central life is the life experience we’ve watched her have through the films. It’s a lot of trauma, processing and resenting of her own abilities and her powers. We’re just putting a shade or cloth over that. [“WandaVision”] is her trying to not be found out in the suburbs, but she’s also in a sitcom. So she’s playing the part as best she can, as well. It’s not the exact, same thread from Ultron. This woman is doing the best she can in this sitcom.

The thing that was fun for me as an actor in the show was when the sitcom and what we know of the MCU [came together] — the tension that’s pulled between the two of them. You’re just kind of peeling away and revealing bits, but you’re not revealing everything. Living in that tension throughout this whole series was my playground.

This shows Wanda in a way that she never was in the movies. And for the first time, she’s being written largely by women, how has that affected the character?

This whole show feels very female. And in a really guttural, pelvic floor way. I told Kathryn [Hahn] that she was the pelvic floor of our show. Because she’s just such a solid person in who she is and what she brings. I do feel that in our show and in the way we tell our story.

I don’t want to take away from all the men that were on our show, but we did have this very feminine energy of large collaboration, large teamwork, lots of dialogue, lots of open communication, lots of feedback. Which I think, generally speaking, one would say maybe is more feminine and masculine, which is a complete generalization [and] I know that.

But that was the tone of our show. And that is how we always worked through our days and how we worked through a year of working. It was 110 days of a shoot, I think. We always had that open communication dialogue from the from the boot camp until our last days on set to even in post-production.