Continue to Variety SKIP AD
You will be redirected back to your article in seconds
Mar 17, 2021 6:00pm PT

‘The Masked Singer’ Reveals the Identity of the Phoenix: Here’s the Star Under the Mask 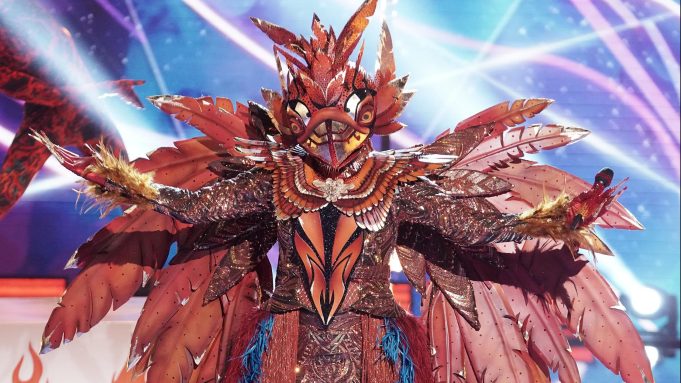 SPOILER ALERT: Do not read ahead if you have not watched Season 5, Episode 2 of “The Masked Singer,” which aired March 17 on Fox.

The Phoenix doesn’t always rise. Caitlyn Jenner, who performed as the Phoenix on Wednesday’s episode of “The Masked Singer,” was the next celebrity to be unmasked on the hit Fox series.

Among panelists, Jenny McCarthy Wahlberg was the only one to get it right, naming Jenner in the end. Ken Jeong, who was initially right by naming Jenner as his first impression, ultimately went the wrong way and gave RuPaul as his final pick. Robin Thicke thought it was Laverne Cox and Nicole Scherzinger thought it was Jonathan Van Ness.

Jenner sang “Tik Tok” by Kesha. The Olympic gold medalist told Variety that her son Brandon assisted in voice training. “He’s got his own band, he’s got his own studio. And so, besides the coaches that they gave me from the show, I used Brandon probably more than anything because I could just go down the street to his studio, and try to work out the songs. I had three songs down, unfortunately didn’t get to the next two.”

Jenner next had songs by The Temptations and John Denver lined up to perform. But she’s not disappointed by having to leave early.

“Honestly, I was thinking to myself, I can’t go any further than three songs,” Jenner said. “If you go all the way to the finals, that’s eight songs you have to do. Some of the songs you would only have maybe one or two days to prepare for. You got to learn this song, you got to learn the lyrics, and then you got to have choreography in there. I was like, I don’t think I can do it. Yeah, that would have been tough.”

Jenner said her only previous singing experience was performing as “Li’l Abner” at a Birmingham, Ala., Summerfest musical in the 1980s. “I’m not a singer, but I can hopefully be as entertaining as I possibly can on stage,” she said. “It’s definitely challenging. When I went out first, I thought, thank God.”

As for the Phoenix costume, Jenner said she was looking for something that was gender neutral.

“So, for literally two months before the show, we started on this costume, and I have to give my hats off to the costume designers, those people are unbelievable,” Jenner added. “The workmanship, the creativity that went into it was just absolutely amazing. It was actually very comfortable inside. It’s obviously heavy, but it was very comfortable inside… I was so proud of what the costume designers did.”

As for what’s next, as the world hopefully starts to return to normal, Jenner said she’s eager to start working more post-pandemic.

“I started a YouTube channel just because during the pandemic, I had nothing else to do,” she said. “I think what we’ve learned over this year is that our lives are pretty good before all of this. When it’s all taken away from you, it’s OK for a little while but for a long period of time, nope. I’ve always had a lot of energy. I’ve always like doing things. I always like being involved in projects. Fortunately, I’ve played a lot of golf. The golf game is very good. I’ve got that now. But I enjoy doing other things. So, [I’m ready to] get back to some kind of normalcy.”

Meanwhile, guest host Niecy Nash was back on Wednesday’s show, continuing her fill-in for regular host Nick Cannon, who was unable to return for the first several episodes of this season due to a COVID-19 diagnosis.

Also new this season, “wildcard” contestants will be introduced into the competition and join the battle for the golden mask trophy. Season 5 celebrity contestants will be split into two groups of five (A and B), but then all-new masked celebrities will jump into the “wildcard” rounds and compete as well. Additionally, the show has added a new character, a rooster named “Cluedle-Doo,” who promises to add some mischief to the proceedings and share additional clues to viewers.

The show’s panelists are also once competing for a “Golden Ear” trophy based on their first impressions of each masked performer (which McCarthy won last time). No one received votes in week one; this week, for the Phoenix, McCarthy Wahlberg and Jeong went with Jenner; Thicke’s was Laverne Cox; and Scherzinger went with Perez Hilton. That gives Jeong and McCarthy Wahlberg each a point so far.

Here were the other contestants and their performances on episode two, “Group B Premiere — Shamrock and Roll”:

Song: “Barracuda,” by Heart
Cluedle-Doo’s Clue for You: “Black Swan has covered a monster.”
Voice-over: “Black swans like me are incredibly rare. But I didn’t factor in that my talent might make me somebody else’s prey. I was caught up, hypnotized by a Hollywood dream that I couldn’t resist, one that would make my dreams come true. But there was a steep price. I fell under a deep spell and feared I’d never see the light again. When all of a sudden, my faithful frock flew to my rescue and set me free. I’m ready to show the world I’m in control.”
Panel guesses: Anya Taylor-Joy, Camilla Cabello, Leona Lewis.

Song: “Mambo No. 5 (A Little Bit of…),” by Lou Bega
Cluedle-Doo’s Clue for You: “Grandpa Monster has trained for battle before.”
Voice-over: “Hey young whippersnappers. Reflecting on my long life, I can’t believe the troublemaking fool that I was as a youngster. Always acting out to keep all eyes on me. Until a teacher pulled me aside after class, and made me see I was smarter than the character I was playing. I decided then to put the “eye” in Einstein and became a star pupil. I’m still working on shaking my bad reputation. So, when this old monster takes his mask off, I hope you’re not afraid of who I was a long time ago.”
Panel guesses: Johnny Manziel, The Miz, Scott Disick

Song: “Ride Wit Me,” by Nelly
Cluedle-Doo’s Clue for You: “Chameleon has a history with precious gems.”
Voice-over: “Unlike most of my fellow cams, I don’t just blend in, I put the ‘tech’ in technicolor. It was all because of my pops, who told me to always keep up with the times. He encouraged me to tinker with every gadget and gizmo around. Years later, when my career almost tanked and I felt completely lost, I leaned back on what he taught me. I used those tech-savvy skills from my childhood to amplify my career and change the game. Now I’m here to change this game. Trust me, I won’t be blending in. Let’s jam.”
Panel guesses: Dwight Howard, Redfoo, Nick Cannon

Song: “Speechless,” by Dan + Shay
Cluedle-Doo’s Clue for You: “Piglet knows how to stay cool, even in the heat.”
Voice-over: “My name is Piglet. I haven’t always been lucky in love. I admit, I’m a hopeless romantic. Yeah, I’m guilty of dropping that L word on the second date. But hey, when you know, you know, right? Sure, I’ve given away a few roses, and the world saw my heart break. Some flowers have some very sharp thorns I guess. But that’s never stopped me from continuing to wear my heart on my sleeve. This may sound crazy, but I see a future on this stage. So, will you accept this pile of mud? It may only be the first round, but I’m falling for you already.”
Panel guesses: Adam Lambert, Charlie Puth