‘The Masked Singer’ Reveals the Identity of the Orca: Here’s the Star Under the Mask 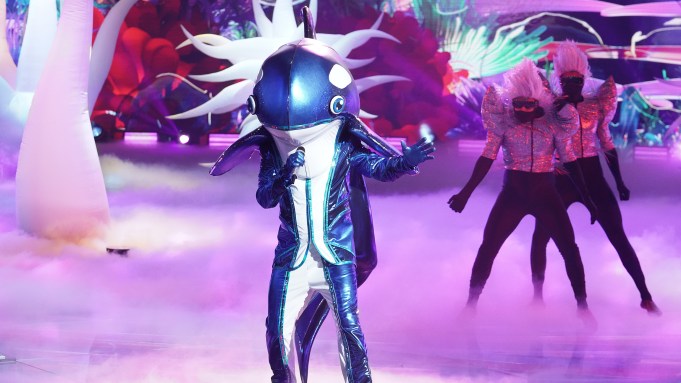 SPOILER ALERT: Do not read ahead if you have not watched Season 5 Episode 6 of “The Masked Singer,” which aired April 14 on Fox.

The Sugar Ray singer and former “Extra” host was the latest celebrity to be revealed on “The Masked Singer,” where he had performed as the Orca. McGrath sang “Every Rose Has Its Thorn,” by Poison, for his second and final performance.

“I think it might be the only competitor in the history of ‘The Masked Singer’ whose costume is way cooler than they are in real life,” McGrath said of his costume. “When I saw the Orca I thought, oh my god, it’s perfect. I’ve got some head room. I thought energy was gonna be my go to. It was never going to be my five-octave vocal range that we know that doesn’t exist. I was gonna have to get by on a little chutzpa and rock and roll, and a whole lot of luck, and the Orca costume really lent that to me.”

None of the show’s panelists figured out it was McGrath. Robin Thicke and Ken Jeong thought it was Green Day’s Billie Joe Armstrong, Jenny McCarthy Wahlberg guessed surfer Kelly Slater and Nicole Scherzinger thought it was Foo Fighters’ Dave Grohl.

“My head was expanding inside that Orca costume,” he said. “All these guesses in real time, all those Rock and Roll Hall of Fame members. My performance was good but they’ve got a beautiful way at ‘The Masked Singer’ of really uplifting and celebrating everybody. Whether your Rob Gronkowski or LeAnn Rimes, they are going to make you feel so good about yourself. And that’s a beautiful part of the show. I was blown away to hear those guesses.”

McGrath was the show’s first “Wildcard,” brought in mid-competition to perform. He said he didn’t know that going into the show.

“’The Masked Singer’ is very good in the information is given on a need to know basis only,” he said. “I didn’t know I was coming out as a wildcard. In my mind, a wildcard means you had a bull’s eye on your back. I was kind of thrown by that, as I’m walking out to do my first rehearsal. But when I got out there and I saw the production. It looked like one of those Ziegfeld Follies 1930s Hollywood production. It looked underwater on TV so they did a wonderful job of alleviating, my Wildcard concerns.”

McGrath was ready to sing “It’s Tricky” by Run DMC for his third number if he had returned. His first number was We’re Not Gonna Take It,” by Twisted Sister.

“The thing that really attracted me most of ‘The Masked Singer,’ is that it scared me,” he said. “It scared the heck out of me because it’s a singing competition. Now you might think, your career is as a singer/entertainer. [But] no one’s ever been confused by voice with Pavarotti or Chris Martin. But being able to be someone else inside the mask, obviously was something attractive to me.

“What I didn’t know, is what an emotional component this show would have for me,” he said. “You become part of this mystery adventure park vibe. It’s the world of costumes and make-believe. You breathe life into this thing, into this Orca, and when I took the mask off the last time, there is no more life, I essentially this Orca is gone. It was so fun to be a part of that, to fool people when you were singing as part of the Orca’s aura and being. I have 10 year old twins and that was a huge part of why I did it. And what a wonderful opportunity in a year that people aren’t doing a lot of things in the music industry. What a ride it was.”

McGrath said Sugar Ray has started to perform again, including gigs in Orlando and Tampa, and the band’s summer dates are starting to fill up.

Meanwhile, Nick Cannon was back full time as host, having previously been in quarantine for COVID-19. Niecy Nash served as guest host of “The Masked Singer” for the show’s first five episodes, until Cannon was unmasked last week as the Bulldog.

McCarthy Wahlberg’s and Scherzinger’s first impression guesses were both Dave Grohl, Thicke went with Billie Joe Armstrong, while Jeong’s was Jon Bon Jovi. None of them picked up a point.

Here were the other contestants and their performances on night six, “Group A Finals — In the Nick of Time”:

Song: “Want to Want Me,” by Jason Derulo
Cannon clue: “What Goes Around… Comes Around.” “We had been together for some time, but as fate would have it, it was time to come back together on stage.”
Panel guesses: Pentatonix, the Jonas Brothers, 98 Degrees
Voice-over: “When this duo became a trio last time, it was a game changer for real. Performing on this epic stage is a far cry from where we started. Life on the road was definitely not glamorous. We performed everywhere, from parking lots to softball fields. But we put our heart and soul in every performance. And the years of hustle paid off, when we finally got the chance to perform for the president. And we crushed it. We raised the roof. Of the White House. And now we’re leaning on that hard working spirit to take us to the Super 8.”
Previous songs: “Man in the Mirror,” by Michael Jackson; “Wonder,” by Shawn Mendes
Previous panel guesses: Boyz II Men; Vanessa Hudgens; Darren Criss, Matthew Morrison, Kevin McHale or other “Glee” stars; Gwen Stefani and No Doubt guitarist Tom Dumont, Sugarland, Boyz II Men, Jacksons

Song: “Killing Me Softly,” by Roberta Flack
Cannon clue: “AKA.” “My first show they came out and said porcupine, and I said no, I’m Robopine. So, AKA.”
Panel guesses: Jamie Foxx, Will Smith, Terence Howard
Voice-over: “The quills are out tonight, and I’m ready to unleash some magic on that stage. I wasn’t sure what to expect from this masked adventure. But now I’m on a mission to make it to the end. And I know a good mission because I’ve been on one my entire career. A quest for a certain golden relic. It’s been an action packed, fast-paced ride. I’m dodged booby traps and so many times my life has nearly crumbled. But I always escaped because I’ve been jonesing for that idol. But for now, I’m chasing a new idol, the golden mask. Winning it will be proof that the ultimate relic will be mine.”
Previous song: “Never Too Much,” by Luther Vandross; “All of Me,” by John Legend
Previous panel guesses: Jamie Foxx, Idris Elba, Lionel Richie, Ginuwine, Brian McKnight, Jason Derulo, Wesley Snipes, Eddie Murphy

Song: “Tell Me Something Good,” by Rufus feat. Chaka Khan
Cannon clue: “Motown.” “Motown brought my family together.”
Panel guesses: Ashanti, Mya, Keke Palmer, Alicia Silverstone
Voice-over: “I’ve been so fortunate my entire career to walk in a variety of shoes. But one of the things I’m most proud of is I have been called a trailblazer, a role model. Sometimes I get stopped when I’m out shopping or at the movies. And it’s the biggest honor. Because when I was younger, shells like me weren’t given many opportunities to be seen. But I fought the current that flowed against me. And now seeing so many people follow my path, that’s what keeps me going strong. Now tonight, I can’t wait for everyone to see what I have in store as I continue to blaze forward.”
Previous song: “Listen to Your Heart,” by Roxette; “Confident,” by Demi Lovato
Previous panel guesses: Kristen Chenoweth, Hilary Duff, Jessica Simpson, Jennifer Love Hewitt, Ashlee Simpson, Jenny Slate, Haylie Duff

Song: “If It Isn’t Love,” by New Edition
Cannon clue: “Aphrodite.” “Yeti is all about love, love, love.”
Panel guesses: Ray J, Justin Bieber, Taran Killam
Voice-over: “As a Yeti, I only come out of hiding for a mammoth reason. And here, it’s to be a wild force to be reckoned with. So watch your step. Where I come from, too many yetis become monsters. But I had a secret weapon. A village of warrior women who were always there to show me the way. Having them as motivators and teachers was golden. And made me the abominable gentleman I am today. Knowing these warriors had my back gave me the confidence to go for the mountaintop when others wouldn’t even dare. The yetis are usually chased from their village. But I was raised right. Being here is a thank you to them.”