‘The Masked Singer’ Finale Reveals Piglet as Winner: Here’s the Identity of the Final Three Celebrities 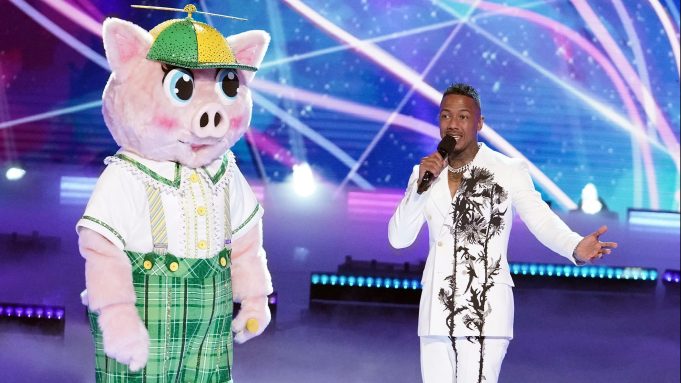 SPOILER ALERT: Do not read ahead if you have not watched Season 5, Episode 13 finale of “The Masked Singer,” which aired May 26 on Fox.

Nick Lachey is hogging “The Masked Singer” spotlight. Disguised as the Piglet, the 98 Degrees star is taking home the bacon as Season 5’s big winner.

Also revealed on Wednesday night’s finale, second place went to pop singer JoJo as the Black Swan. And in third place, hip-hop star Wiz Khalifa was unmasked as the Chameleon.

“I really tried to approach it in a way to say, ‘hey, have some fun and try some different things. Maybe they’ll work, maybe they don’t. But at the very least they’ll be memorable,’” Lachey told Variety. “That was kind of my mentality with this whole thing. Leave it all out there and go for it. Why be cautious, you’re in a pig costume!”

Lachey said he was a late addition to this season’s competition, and was on a skiing trip with his buddies when producers called just four days before the first episode taped.

“My kids have always been a huge fan of the show and so it was definitely something on my radar,” he said. “So when it came up, I thought it was, hey, this is another shot. My kids will love it and it will be a fun kind of journey for us to all take together. I’m just thankful that it all worked out kind of last minute.”

The serendipity continued to the Piglet costume, which Lachey immediately fell in love with. “I’m from Cincinnati, which is known as ‘Porkopolis,’ the city of the Flying Pig and my production company is called Flying Pig Prods.,” Lachey said. “So when they presented that to me as the first option I said, ‘hey this is a sign, I’m supposed to be the Piglet.’”

“I was pretty sure that they were going to recognize my voice just because I’ve worked with everyone on that judging panel before,” he said. “They all they all know me from other things we’ve done together and working together on other projects. I honestly didn’t try to get too caught up in that part of it. I try to focus much more on if they figure out who I am so be it but, but we’ll go out there and still give a great performance.”

Like most contestants, Lachey said performing in the costume was tougher — and hotter — than he expected.

“You don’t go into it thinking it’s going to be a cakewalk but I didn’t really appreciate how heavy the costume would be,” he said. “How much it kind of weighs on you. Especially in the beginning, I was having a really tough time catching my breath in there. They had an ice vest on to keep me cool because it was super hot in there, as you can imagine.”

The ice vest became to constricting, however. “I said, well get rid of that and I’d rather be hot than not be able to breathe. You’re never fully comfortable. That’s definitely the most challenging part of the show. There was a point the beginning where I wasn’t sure I was going to be able to do this. It was just really tough. You know what it feels like to sing and perform. And I was like this isn’t it, this is not performing right now. I’m proud of the fact that we were all able to work together to get to a point where I could go out there and do what I need to do.”

Lachey performed “Faithfully,” by Journey, for the finale. His previous songs included “Speechless,” by Dan + Shay; “Good to Be Alive (Hallelujah),” by Andy Grammer, “7 Years,” by Lukas Graham, “The Pretender,” by Foo Fighters; “Against All Odds (Take a Look at Me Now),” by Phil Collins; “Superstition,” by Stevie Wonder, with operatic open; and “Bruises,” by Lewis Capaldi.

“The Lukas Graham song ‘7 Years’ is one I’ve always loved,” he said. “It’s always resonated with me. I’m super close to my dad, and have a son. So it’s always one that touched me for a long time. The chance to sing that one was a really special moment for me. I was thrilled I got to do a Foo Fighters record. And I got to throw a little opera in there.”

Like Lachey, JoJo said struggled at times with the costume. “I could not have anticipated, how strange it was being inside this costume,” she said. “I realized that I was more claustrophobic than I ever knew. And I did have a bit of a panic attack, I didn’t have a full blown one, but I really had to breathe through it and talk myself down from freaking out. And feeling afraid or feeling like I was going to faint. And gradually it did get easier.

JoJo said she was willing to try the show after seeing her pal Tori Kelly compete last season. “Once I watched it I literally became addicted, every week,” she said. “Me and my friends were in a group chat and we were talking about our theories and I just got super into it. So when I was asked to do this season, I was just like, yeah, I think this would be a good thing for me. Because somewhere along the way I developed some stage fright and just a weird relationship with my voice. I figured that this would be a really great place for me to try to push through that.”

JoJo sang “How Am I Supposed to Live Without You,” by Michael Bolton, in the finale. Her previous songs were “Barracuda,” by Heart; “In My Blood,” by Shawn Mendes; “How Will I Know,” by Whitney Houston; “Use Somebody,” by Kings of Leon; “Do I Do,” by Stevie Wonder; “Thinking Out Loud,” by Ed Sheeran; and “Tequila,” by Dan + Shay.

“I’m such a music nerd that it was just really exciting to have this completely open playground, to do whatever in,” JoJo said. “I wanted to choose songs that hadn’t been done before. We came up with a really eclectic list of songs over the span of time, and most of them were songs that I had just loved over the years and wanted to try, like ‘In My Blood,’ by Shawn Mendes. But then a song that I didn’t think about for myself was the Kings of Leon song. It ended up being one of my favorite performances.”

Khalifa said his whole family enjoys “The Masked Singer,” so joining in on the show was an easy call. “And then being on lockdown for a whole year I haven’t gotten a chance to perform or do anything on the road so I was just dying to get back on stage,” he said.

As Chameleon, Khalifa said the show “lived up to my expectations. The costume was movable. I feel like everybody has their own thing that could have been a little bit more comfortable or a little bit smaller, but they did a perfect job in my opinion keeping everybody cozy while we were up there on the stage. It was definitely a little bit more difficult than I actually thought it would be.”

“One of my favorite performances was Busta Rhymes song,” Khalifa said. “That was one of my favorite songs growing up, and we actually did like a small costume change where they took the tongue off, and they put a squiggly one so that was just more fun and it was like the alternate costume. I was the only one who was able to do that the whole season so it was cool.”

The show’s panelists are also once competing for a “Golden Ear” trophy based on their first impressions of each masked performer (which McCarthy won last time). Jeong and McCarthy Wahlberg each had two points heading into the finale, while Thicke had one.

That gave McCarthy Wahlberg a third point — and for the second season in a row, she won the “Golden Ear” award.

As for what’s next for the three finalists, Lachey and his band 98 Degrees are recording new music, starting with a new single coming out July 9, “Where Do You Wanna Go.” The group also has a remix album of songs, to be backed by a campaign called “98 Days of Summer.”

“We get back on the road starting late August in the fall,” he said. “Things are finally starting to open back up and that was another big reason I did the show. I’m used to touring, I’m used to performing and I haven’t done any shows since last February. As a performer, I was thrilled to have an outlet for that and have a chance to perform again and Piglet gave me that chance.”

Then, on TV, Lachey and his wife Vanessa Lachey are back shooting a second season of the breakout Netflix reality dating hit “Love is Blind.” “We were supposed to shoot last May and it got postponed for obvious reasons,” he said. “We’re in the middle of shooting that right now so we’ll see a Season 2 and ultimately a Season 3, get rolled out here before for too long. That show’s a lot of fun for us and we’re thrilled the way people responded to it. We’re excited to be part of the show going forward.”

JoJo is releasing the new single “Creature of Habit,” and is itching to go back on tour: “If it weren’t for ‘The Masked Singer,’ I wouldn’t have shed the skin that I needed to be able to write this next project, and to be able to be ready for tour. It really helped me find my confidence again, find my voice, literally and figuratively. And trust myself. It kind of gave me my mojo back in a way that that I needed to, performing every week. I really missed that, in not being able to be on tour. So, next year, going on tour, and putting out new music, new projects, and really just wanting to continue to grow and move forward and moved in a spirit of fearlessness that it allowed me to say yes to the show.”

Khalifa also plans to drop some new music. “I restarted my residency in Las Vegas, so a lot of different performances, there’s going to be some festivals and promoting the music that I dropped last year that I wasn’t able to get out there,” he said. “A lot of stuff is going to be music driven just because the past year, we’ve been off. So now it’s just time to get right back to the music.”