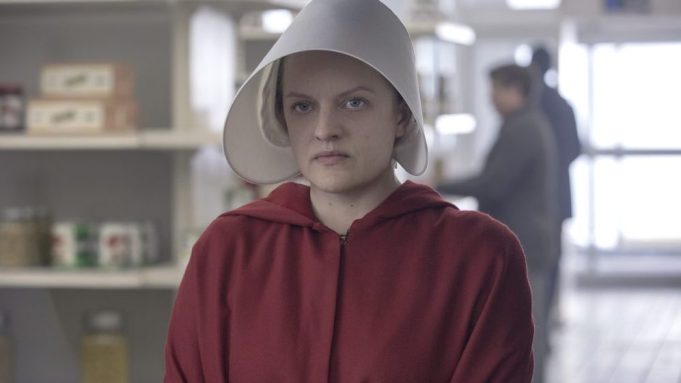 After a year and a half, dystopian drama “The Handmaid’s Tale” is returning to Hulu amid a notably different social and political climate than the one it left. But in doing so, it will inevitably reflect on where we’ve been, as well as offer a fictional take on where we may be going.

“I am more focused right now [on] how the show relates to the post-Trump era,” said showrunner Bruce Miller during a virtual Television Critics Assn. press tour panel for the show on Thursday. “A lot of the show this season is about waiting for things to snap back to normal, and expecting things to snap back to normal and why aren’t they snapping back to normal and when am I going to feel normal and they were supposed to be normal?! So, I think that as much as we are addressing the things that came up during the Trump era, we’re addressing the things that come up in the post-Trump era, but I think that’s because the three people on this call and all the people in the writers’ room and all our people on the cast are living in that world.”

That said, Miller added that although the show has social relevance, “just to be back entertaining people, I think, is the thing that we all want to do.”

When “The Handmaid’s Tale” was last streaming new episodes, Donald Trump was still holding the presidential office during the summer of 2019, when the third season of the streaming adaptation of Margaret Atwood’s novel of the same name wrapped up. Family separation was making news headlines, as were multiple shooting incidents across the United States and allegations of trafficking and other sex offenses against Jeffrey Epstein, who was found dead in jail the week before the finale episode. The COVID-19 pandemic was still months aways; renewed cries for the end to systemic racism were a year away; although the first democratic debates were taking place, the 2020 election felt miles away, and the idea of an attack on the U.S. Capitol was only a work of fiction.

“It’s not one of those ‘Law & Order’ shows where you rip from the headlines — that’s not what we do,” actor, executive producer and episodic director Elisabeth Moss said. “I think a lot of our story tends to resonate with people and feel relevant because those themes are never going to be something that is not relevant and doesn’t feel truthful. Unfortunately, then there are these gigantic events that happen in real life, that have been in the book or it have happened on the show, which is far beyond me to comment on, but I think for all of us and for what I what I feel is most relevant about the show is the humanity of it and the human nature.”

The fourth season of “The Handmaid’s Tale” picks up immediately after the events of the third season finale, in which Moss’ titular June was shot after helping dozens of children escape Gilead and take refuge in Canada. June obviously survives — as Miller put it, “The show’s called ‘The Handmaid’s Tale’: it’s about her” — and her resolve to keep fighting the oppressive forces that allowed Gilead to take shape only grows stronger.

“So much of June’s journey, especially in the back half of the season [is] about a feeling of rage and anger,” Moss previewed, adding that June won’t give into the desire to just “sweep things under the rug.”

“So much of what June’s journey is is screaming into the wind, ‘We will not forget,'” she explained.

Behind-the-scenes of the fourth season of “The Handmaid’s Tale” saw changes, as well, due to COVID-19, which necessitated some rewriting of scenes and remote collaboration.

“This was a very strange year and a lot of us were not there,” Miller said of being on set in Toronto.

To keep cast and crew as safe as possible, Miller said, they found themselves looking at where they were shooting differently because some locations would allow for fewer people to be together safely than others, and they also actively reduced the number of people in scenes.

“Thee practical realities of producing and making the show on the ground were very, very difficult. But the people in front of the camera, we tried for the mot part to protect that space — that those guys were doing what they would have been doing any way,” Miller said. “The biggest change was it was difficult to get our cast into Canada to shoot. We had to keep people out of episodes simply because they didn’t have enough time in their schedules.”

That said, the team didn’t allow the pandemic to limit the scope of their show. In fact, executive producer Warren Littlefield said, Season 4 is their “most ambitious production year because we’re out there following this journey.” Rather than have a “home base” with essential standing sets such as the Waterford house in the first season or even Commander Lawrence’s house in the third season, Season 4 sees June on the run.

“All that claustrophobia we had in the first three seasons in the house has now been exploded to exactly the opposite,” Miller added.

Amid all of this, Moss not only made her directorial debut on the show, directing the third episode, but she then helmed a block (Episodes 8 and 9) at the end of the season, as well. She “directed for a few weeks then had to stop for months then came back [among] COVID,” Miller said. “From prep to shooting to post Lizzie and i were never in the same room. We spoke but we were never face-to-face. She did this completely remotely and it’s difficult enough, directing television; it’s very difficult directing your own self and your own show.”

“The Handmaid’s Tale” Season 4 premieres April 28 with the first three episodes, and then will release the rest of the 10-episode season weekly on Wednesdays. Watch a teaser for the new season above.