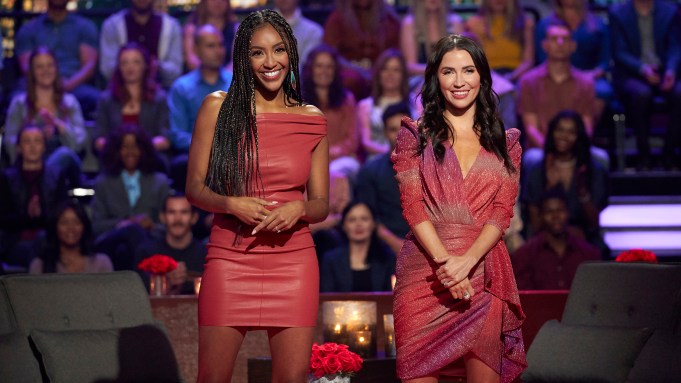 Tayshia Adams and Kaitlyn Bristowe have closed deals to serve as co-hosts for the upcoming 18th season of ABC’s “The Bachelorette.”

ABC and Warner Bros. Television have confirmed the news to Variety.

Adams and Bristowe — who are both former stars of “The Bachelorette” — initially stepped in as co-hosts for Season 17 after longtime host Chris Harrison stepped aside from hosting duties in the wake of controversy. Since then, he has fully departed the franchise. Variety exclusively reported that Harrison was paid out $9 million when he left the franchise he had hosted since its launch in 2002.

Both Adams and Bristowe’s contracts include multi-year options, a source close to the series tells Variety. The deal is typical for any network or studio, in order to give the production the upper hand and flexibility with contractual options for the future — but in this case, also indicates that a permanent replacement for Harrison has not been determined.

Around the time that Harrison departed, numerous sources told Variety that the network and studio were not in a rush to name a replacement, and that the earliest a permanent host might be announced would be for the next season of “The Bachelor.” (Typically, “The Bachelor” heads into production each fall and premieres in January — so the new season would not be on-air until early 2022, giving the franchise the luxury of time, before making any permanent announcements.)

Young’s season of “The Bachelorette” has just recently started production, sources say. Adams and Bristowe have been quarantined on-site for roughly a week, along with other cast and crew members. The new season is expected to premiere this fall.

When both Thurston and Young were announced as “The Bachelorettes,” it marked the first time ABC selected two back-to-back stars for the female-fronted dating show.

While viewership has been down for Thurston’s season of “The Bachelorette,” Adams and Bristowe have received a warm reception as co-hosts, garnering positive feedback from Bachelor Nation on social media.