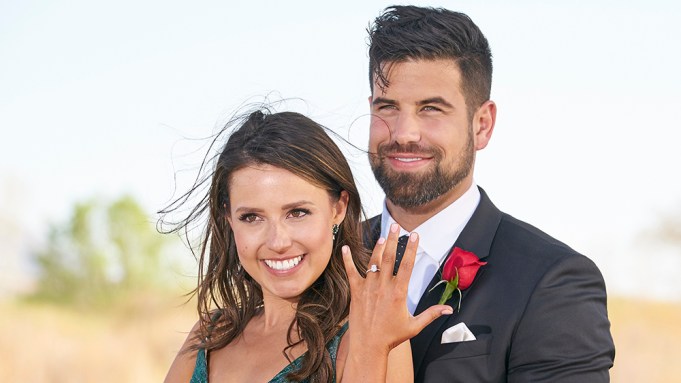 SPOILER ALERT: Do not read ahead, if you have not watched the season finale of Katie Thurston’s season of “The Bachelorette,” which aired Monday, Aug. 9 on ABC.

When “The Bachelorette” started this season, the drama was off-screen, surrounding the now-departed host Chris Harrison. But by the time Season 17 ended, the drama was back on primetime revolving around reality stars desperately looking for love.

Leading lady Katie Thurston left with a ring on her finger and a fiancé in frequently-seen Bachelor Nation alum, Blake Moynes.

But the finale didn’t wrap up without a dramatic journey that included a major twist and a huge shocker with frontrunner Greg Grippo, who left the show on his own accord the week before fantasy suites, leaving Thurston and tears and viewers completely stunned at home.

On last night’s episode of “After the Final Rose,” Thurston sat down with Grippo for the first time since shooting wrapped. She did not hold anything back, as she criticized the contestant for “gaslighting” her, after he walked away when she didn’t reciprocate his declaration of love. Thurston’s commentary — and Grippo’s reaction — jumpstarted a flurry of opinions on social media.

Today, for the first time, speaking to Variety, Thurston’s fiancé reacts to Grippo’s conduct, standing behind his future wife.

Moynes says Grippo’s behavior reminded him of negative memories from his childhood, which “triggered” him. (Moynes’ parents separated when he was young, and he was raised by his mother, Emily, who is now a life coach, running her own company that specializes in coaching women to break away from toxic relationships; his mother has said on Instagram that she endured two “painful divorces.”)

“I mean, listen,” Moynes tells Variety. “The way I look at it is if that’s the love of your life, you just don’t talk to her like that. You just don’t. You fight harder and he didn’t do that.”

Moynes continues: “There was talking down and things. It’s hard because I try to put myself in that situation…that’s how I try to judge. And I wouldn’t have ever approached it that way, so, I just saw it as wrong.”

“I grew up in a household where that type of behavior was a constant for 17 years and I saw what that can do to my mom, in that case,” Moynes shares. “And so, it triggered me a little bit. It reminded me of a brutal past, to some degree…I hope that Katie knows that she’ll never have to hear that from me.”

Here, Katie Thurston adds her thoughts to the Greg drama, and what’s next for her and her fiancé — plus, she weighs in on the backlash she faced on TikTok throughout her season.

On the finale, you said that your family didn’t know that you were engaged. I assume that was one of your first phone calls last night?

Katie Thurston: They knew we were together because I was leaving so much to go secretly see him, but they didn’t know at what level. They were very supportive. We’re not a traditional family where I need to make sure they had a heads up or have a serious conversation, which is why I was comfortable with them just finding out the same way that mostly both our families found out.

Walk me through the past few months, since you wrapped filming — you obviously had to hide your relationship, so what was that process like?

What is next for you two? Blake you’re in Canada, so where will the two of you settle down now?

Thurston: Well, I don’t think we’re settling down really anywhere. We’ve agreed to live with each other, but chunks at a time, whether it’s Canada [or] San Diego. He’ll be in Africa at times and so, if I can join him, I will. There are going to be times we’re apart, but we just have this freedom of being able to hop around together, and I think that’s probably we’ll do for the first year, at least.

Do you two want to take a step out of the spotlight and live a more normal life, or do you want to stay in the entertainment industry?

Thurston: I don’t think the entertainment industry is where we’re headed. We have a lot of similar alignments in terms of where we’re headed in life, and what he wants to do with his advocacy for animals and the planet are things that also excite me and that I’m passionate about, as well. So it’s just really exciting to see what projects we can work on and what kind of education we can bring back to the people who follow us on social media and give a new perspective that people maybe aren’t totally exposed to in the moment.

Katie, before you entered this franchise, you had quite a following on TikTok. And you’ve spoken about the reaction from Bachelor Nation on social media — good and bad. Are you excited to jump back into TikTok, not being in the midst of “The Bachelorette?”

Thurston: It’s hard to know if how much I’ll go back to TikTok because that was more of a COVID quarantine thing that accidentally blew up. Now, we are getting out of the house and we can do things and travel. Because COVID is hopefully going away, I don’t really know how much we’ll be creating content versus actually living life.

You changed your TikTok handle. It used to be “Vent With Katie,” and now it’s just your name. There were a lot of rumors that you were getting backlash for being too open, so can you shed some light on why you changed your social media handle?

Let’s talk about the major elephant in the room. Obviously the proposal was the biggest news of last night, but what got the most headlines was all of the drama surrounding the Greg storyline. Blake, when was the first time that you watched all of that?

Moynes: I would’ve seen it right before I went on stage, as well — right before the taping of “After the Final Rose.”

Katie, did you watch back “After the Final Rose?” What were your thoughts?

Thurston: Yeah, it’s tough because I watched the episode initially right before seeing Greg, so those emotions are very fresh and Bachelor Nation hadn’t seen it yet. I had no idea how heavy this topic was going to be, regardless of whose side you’re on or what your perspective was, so now, given that it [had] been a week of listening and understanding, I think all I can do is support Greg and his journey for healing and whatever it is that he’s going through. I did come down hard and I did have a lot of anger. If I have the opportunity to talk to someone who hurt me, I’m going to.

Do you think that Greg was acting?

Thurston: It’s hard to say. I mean, I can speculate all day, but at this point I don’t really care to have an opinion if he was or if he wasn’t. He was in acting school — take that for what you want. Ultimately it helped both of us make the right decision in terms of him leaving and me staying. And I ended up with exactly who I’m supposed to be with.

Have you spoken to Greg since “After the Final Rose” taped?

Thurston: No, I have not reached out to him.

Katie, you went from Greg to Blake. And Blake, that’s something you can relate to because there was Clare and Tayshia and now obviously Katie. A lot of viewers are saying, ‘How is it possible that you can fall in love so quickly, after thinking you’re in love with someone else? ‘Can you both explain what it is like being in this vacuum of the show and how that may impact your emotions?

Thurston: You have all distractions removed and all you can do every single day is focus on the relationship. I’ve been very open from the very beginning that I do fall in love more than once. I do think that’s possible. It wasn’t until towards the end that I really had to start comparing the men… I kept every relationship individual. Every guy had something different to offer. People question Justin being there, and it’s really unfortunate because there is a reason he was there. But when you have two hours each week, there’s only so much you can show… you might not understand how I can love Blake, but there’s just so much that you didn’t get to see, unfortunately.

Moynes: The first time I went on, it was for trying out the show and that was Clare. Then Tayshia came in and you try to separate the two, which is very hard to do in a short period of time, and so, that’s why you saw the very slow transition with Tayshia, which really didn’t amount to much… I really was into Katie [but] there was no way I was going on to do this “Bachelorette” thing again — it’s not that fun; it’s really not. But I was like, “I believe in this, and let’s just meet her and see how it goes.” And I’m so glad I trusted my gut, fighting for someone I really had a good intuition for because now we’re sitting right here.