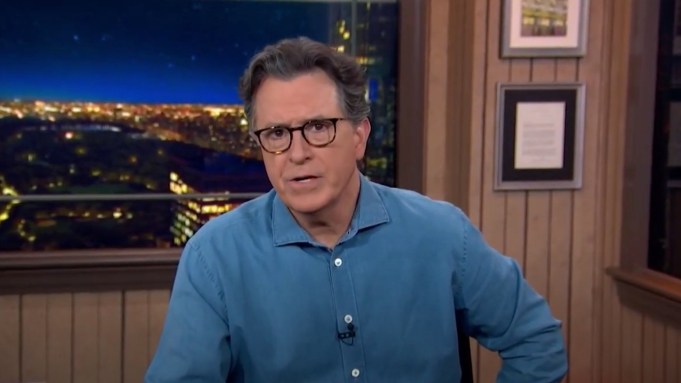 “Just before the taping of our show today, the verdict was announced in the trial of Derek Chauvin. He was found guilty on all three counts in the murder of George Floyd,” Colbert began. “After 10 hours of deliberation, a jury in Minneapolis decided that it is illegal for police to murder people. That Black lives matter.”

Though Colbert praised the verdict for holding Chauvin accountable, he maintained that the fact of Floyd’s death means that true justice cannot be served.

“It’s hard to celebrate, because a man is still dead, but there is a sense of relief that at least this one injustice was not compounded with indifference, and it could easily have gone the other way,” Colbert said. “No matter what you saw on that tape, this nation does not have a great track record on this subject. But at least in this case, this man faces accountability.”

Instead, Colbert said that “justice is a far more difficult goal” for America to achieve — but shared hope that the jury’s decision is a turning point for accountability when it comes to police brutality and killings.

“America still has a problem of over-policing and systemic racism, but hopefully this is a step toward a future where police being held accountable for their actions isn’t headline material, and a hope that accountability today is deterrent for tomorrow,” Colbert said. “Today is one stop on a journey that began last May and led to protests calling for that accountability in every town and every city in America. But this is just one stop. There is more work to be done, and it’s work that all of us should be committed to. Because as Ben Crump, the Floyd family lawyer, reminded us today: Justice for Black America is justice for all America.”