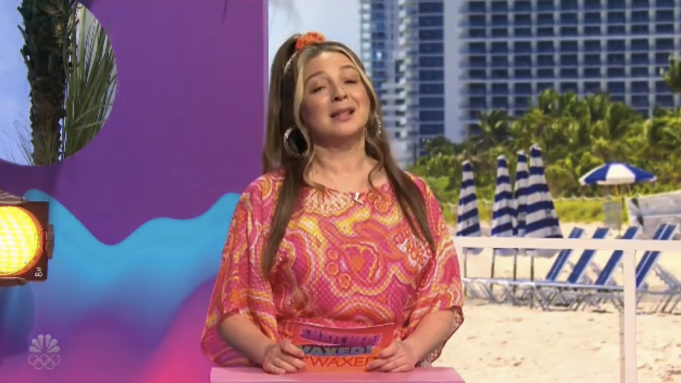 Spring break is upon many college students, and despite the still ongoing COVID-19 pandemic, thousands of them have flocked to Miami Beach, prompting rallies and protests and, on the night of March 27, a “Saturday Night Live” sketch about the “fourth wave” they may be starting.

Episode host (and former cast member) Maya Rudolph played the host of a fictional spring break game show down in Florida entitled “Snatched, Vaxed or Waxed,” kicking things off by saying about the pandemic, “We’re so close to the end, let’s ruin it!” (You can watch the full sketch above.)

Chris Redd, Beck Bennett and Kyle Mooney were the contestants, while Chloe Fineman, Ego Nwodim and Heidi Gardner came on as “COVID cuties.” The object of the game was for the guys to determine whether the women had “hard bodies” aka were “snatched,” had gotten the COVID-19 vaccine and had “antibody-ody-odies” or were smoothly waxed.

Nwodim, for example, played a young woman who said she wasn’t technically on spring break because she is in “Zoom school” to be a therapist, to which she told the patient on her phone he was crazy. Redd thought she sounded smart, so he went with “waxed,” while Bennett said, “I don’t want herpes so I’m going to say she’s vaxed.”

Gardner’s character, on the other hand, came right out and said she was “anti-vax” and “anti-mask.” Redd thought she was just flirting, though, so he guessed she was vaccinated.

“Oh come on, you know no one partying in Miami is actually vaxed,” Rudolph said.

If the guys guessed correctly, they got to take the women out on dates to famed Miami locations. No one guessed Nwodim’s correctly, though, so she was sent to “the Versace murder steps” all by herself.

The sketched also poked fun at Spirit Airlines, claiming they were promising $10 flights to Miami, but for anyone worried about the safety of travel, “Don’t worry, we keep the windows open.”

At the end of the sketch, sirens went off, and Bennett pulled on a police vest. “That siren means I’m on duty now,” he said.

“No, it means we do a shot and keep the party going,” Rudolph said, to which Melissa Villaseñor came out to help them do just that.

Rudolph first joined “Saturday Night Live” in 2000; she was a featured player first and then went on to become a full cast member, working on NBC’s late-night sketch comedy series for seven seasons. After that, she returned as a special guest a few times and made her hosting debut in 2012. After winning the guest comedy actress Emmy just last year for her portrayal of then vice presidential hopeful Kamala Harris, she resumed that role earlier in the 46th season this year.

Later in the episode, the show skewered those who are getting the vaccine — the baby boomer generation.

In a music video entitled “Boomers Got the Vax,” the show commented on how that generation crashed the economy multiple times but was able to get out of college without debt and with easy job offers, has their retirement funded and is now lucky in a new way. Watch that video below.