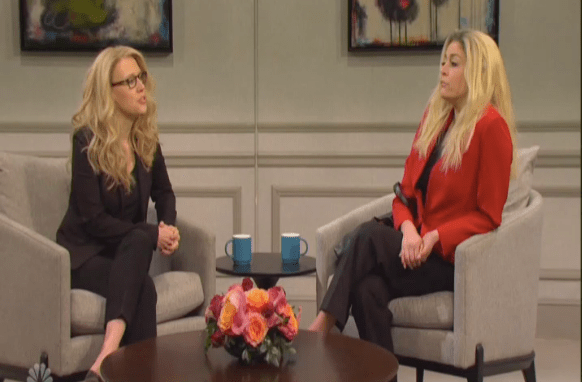 From the attack on the United States Capitol to the inauguration of President Joe Biden and all of the COVID-19 developments in between (including a still-rising number of cases in California, a U.K. variant and a very slow rollout of the vaccine), so much has happened since “Saturday Night Live” last aired a new episode it seemed an increasingly impossible task for the NBC late-night sketch comedy series to respond to the news. But the Jan. 30 episode — the first one of the new year and the new political administration — did its best by kicking things off with a fake show-within-the-show cold open sketch entitled “What Still Works?” in which Kate McKinnon looked at what in American society still worked.

“It’s a new year and we have a new president so some things should work,” she said in the sketch, which you can watch above.

Starting with a look at the government — and including special guest Congresswoman, education committee member and QAnon promoter Marjorie Taylor Greene (played by Cecily Strong), she had her doubts that things did, though. It didn’t help that Strong’s Greene sat down, offered her a gun from her purse and then launched into a list of her theories, including that both the Parkland shooting and 9/11 were hoaxes. About the former she said, “The teachers were actors and the children were dolls,” while she wondered aloud, “Did anyone actually see it happen?” about the latter.

Additionally, she claimed the California wildfires were created by Jewish space lasers.

“Those are real things you believe and tell other people about?” McKinnon asked. “You represent the U.S. People can Google you and it’ll say, ‘She’s a real member of the U.S. government.'”

Concluding that the government doesn’t work, McKinnon said she regretted “not taking that gun” before moving onto look at the state of the stock market, with Pete Davidson joining her as Derrick Boner, “the new majority shareholder of GameStop.”

McKinnon broke down the recent skyrocket of GameStop’s stock by pointing out that two weeks ago it was valued at $17/share and then went to $413/share. “Would you say that reflects the kind of business GameStop has been doing in the past two weeks?” When Davidson’s Boner pointed out that people download all their games now, McKinnon said it was a “dying business.”

“The entire system is a joke?” he said.

Of course that led McKinnon to add the stock market to the “doesn’t work” pile alongside the government before moving onto social media, which she pointed out some people think never worked.

“Fundamentally Facebook still works,” said Moffat’s Zuckerberg. “Not only does it help form communities online, it also helps people meet in real life, for example, at the Capitol.”

The vaccine rollout was next up, with Kenan Thompson playing O.J. Simpson as a recent recipient.

“Teachers can’t get the vaccine, but you did?” McKinnon asked. “People with long-term lung conditions can’t, but you did? Among all 3% of all Americans getting the vaccine was O.J. Simpson.”

The final topic was Tom Brady, and in a rare moment of the episode’s host taking part in the cold open sketch, John Krasiski played Brady and came on to speak for himself. But as McKinnon listed his accomplishments, from heading into his 10th Super Bowl to taking “one of the worst franchises in football” to the championship in his first year, she just went ahead and declared that he still worked.

“It’s not like you’re a weird Trump guy or anything, right?”

“Thanks for having me,” he said, as he stood up and exited stage left.

The first sketch after Krasinski’s monologue also responded to recent political headlines, with the host playing a small town Georgia Sheriff who is introducing his young relative (played by Davidson) visiting from New York to some of his townspeople. Since Georgia went blue during the election, they claim they are just like New York — and quickly prove showcase how they think so, with complaints about CNN, “with its corporate, neo-liberal, ‘both sides’ nonsense,” as Aidy Bryant’s character put it (Just give me my Rachel Maddow!”), listing their pronouns, calling Michelle Obama’s “Becoming” “the good book,” serving avocado toast and shouting out their Jewish senator (Jon Ossoff).

When Moffat showed up in a MAGA hat, Krasinski pointed out that “this is Stacey Abrams country” and had his deputy (Andrew Dismukes) escort him to the state line. But when Melissa Villaseñor, playing a health inspector, complained that no one was wearing masks, they exclaimed that the pandemic was a hoax.

Later in the episode Colin Jost and Michael Che riffed further on the last few weeks during their “Weekend Update” segment.

Some, like “the inauguration, Christmas and [that] the terrorist watch list now includes white people,” Jost pointed out were actually good events. “Diversity. It’s good to see yourself represented,” he said.

Beck Bennett also stopped by the news anchor desk to portray Mike Lindell, the MyPillow CEO who was recently kicked off Twitter. But while they focused on discussing his alleged insurrection, relationship with Donald Trump and lawsuits against him, they somehow skipped over the fact that he sued a publication for rumors he had a romantic relationship with Jane Krakowski.